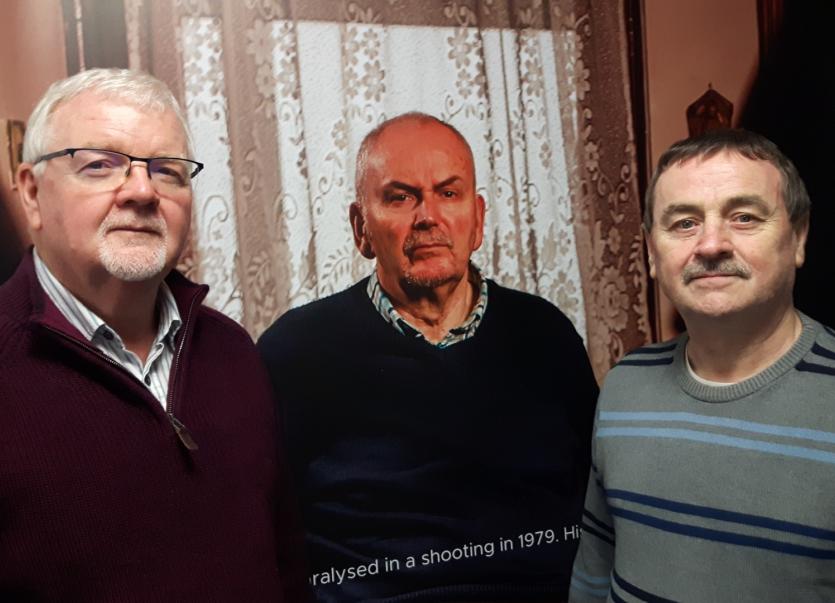 Gerry Canning (right) with Michael Doherty (left) whose father Pearse was first on the scene to help when the bomb exploded. Pictured in front of a photo of another Troubles victim at an exhibition.

A Derry man who suffered life-changing injuries in a booby-trap bomb explosion has urged Stormont to deliver on the long-awaited Victims Pensions Scheme.

The scheme had been set to open for applications tomorrow, May 29.

The British government agreed that it would be open to those who had been injured ‘through no fault of their own living with the effects of either physical or psychological injury’.

Payments for those who qualify will be backdated to 23 December 2014.

Victims and campaigners have fought for such a scheme for over ten years.

Like thousands of Troubles victims, Derry man Gerry Canning was deeply disappointed to learn that the pension has been delayed due to a stand-off between Stormont and Westminster over who foots the bill for its estimated £100m cost.

Mr Canning was 20 years of age when he lost a leg after an IRA bomb tore through a house in the Creggan estate in June 1973.

He was a bricklayer by trade at the time the incident occurred but due to the unpredictable nature of that work he took up a role with the Housing Executive as a night watchman looking after empty properties by carrying out repairs and preventing vandalism.

The first ever mortar attack in Northern Ireland took place at the time, Mr Canning said, when the IRA targeted British Army personnel stationed at the Piggery Ridge encampment on the upper edge of the Creggan estate.

On June 20, 1973, an attempt was made to draw the army in to a booby-trapped house that he was looking after in Rinmore Drive.

Mr Canning lived a few hundred yards away and after the mortar attack he decided to check on the property.

British soldiers arrived at the house and insisted he show them around.

They suspected the IRA had attacked Piggery Ridge from the property.

It was while showing them around that the bomb went off.

Mr Canning lost his livelihood as a fully qualified bricklayer and was awarded meagre compensation at the time.

He has never received an apology from those responsible for planting the bomb.

The DUP has always maintained that the scheme should not be open to ‘victim makers’ while Sinn Féin has said there should be ‘no hierarchy of victims’.

News of delays to the scheme came as ‘no surprise’ to Mr Canning who has always said he’ll believe it when the money is in his pocket.

He commented: “If this money was for MPs at Westminster or MLAs at Stormont they would have no problem finding it but when it comes to victims of the Troubles they can’t.

“The main problem all along has been between Sinn Féin and the DUP, they’ve been arguing the toss for years about who should be eligible for this pension.

“Sinn Féin wanted ex-combatants who were killed or injured by their own actions to be included.

“But the DUP said ‘no, that it should be for innocent victims’.  So they could never agree about what was going to happen.”

Delays are not helping those who have been waiting for years, he said, who are not getting any younger.

“I thought all along that they should’ve set aside their own argument, and pay the people who are entitled to it upfront and then argue about the rest of it.

“Westminster and Stormont should split the cost between them now, then argue about it later and that government can meet the cost then, instead of having victims waiting any longer.

“It seems like it’s going to drag on and that isn’t helpful to any of the victims.”

Speaking at Stormont this week DUP MLA Paul Frew urged the Secretary of State for NI Brandon Lewis to stand by the legislation that was passed at Westminster and release the funding.

“Surely this scheme should be funded by Westminster, it’s where the legislation was passed and innocent victims go right across the UK,” he added.

He went on to say that Sinn Féin was the ‘political wing of the IRA who caused so many of those victims’ and said it was ‘galling’ that the party is ‘asking the British government to pay for their evil’.

Sinn Féin MLA Gerry Kelly said there were a ‘wide range of victims across the board who deserve this payment’ but acknowledged it will not compensate for the deaths, injuries and suffering caused to families.

He disagreed with the British Government approach and accused it of attempting to ‘redefine’ who was a victim of the Troubles and he believes it has been widened to disregard ‘hundreds’ of people.

“There is a legal definition of a victim in law and it’s been there since 2006 and the Stormont House Agreement has been in place from 2014,” he added.

The Sinn Féin representative concluded by saying the pensions scheme should proceed but was adamant that the British Government should pay for it as the Executive ‘can’t afford it’.

The Troubles claimed more than 3,500 lives and it has been estimated that another 40,000 people were injured.

A pension was finally agreed in 2014 and signed into legislation in January.

Since then the scheme has not been designated to a Stormont department.

Victims Commissioner Judith Thompson highlighted ‘a catalogue of missed deadlines’ by the government which have only compounded distress amongst victims.

She stated: “It has been made clear to me that victims and survivors are not only deeply distressed but very angry that once again they are made to feel expendable. It is one thing to fight for years to get agreement on victim’s payment but quite another to be made to wait for delivery once agreement has been gained.

“We do not want a situation where Government has to be challenged in court by elderly victims and survivors to get what they have been promised.”

Alan McBride, coordinator of the WAVE trauma centre, lost his wife Sharon and father-in-law Desmond Frizzell in the IRA's 1993 bombing of the family's fish shop.

He said the Executive faces the embarrassment of being brought to court by victims over its failure to implement the scheme.

Court action is set to commence tomorrow if no agreement is reached with Stormont.