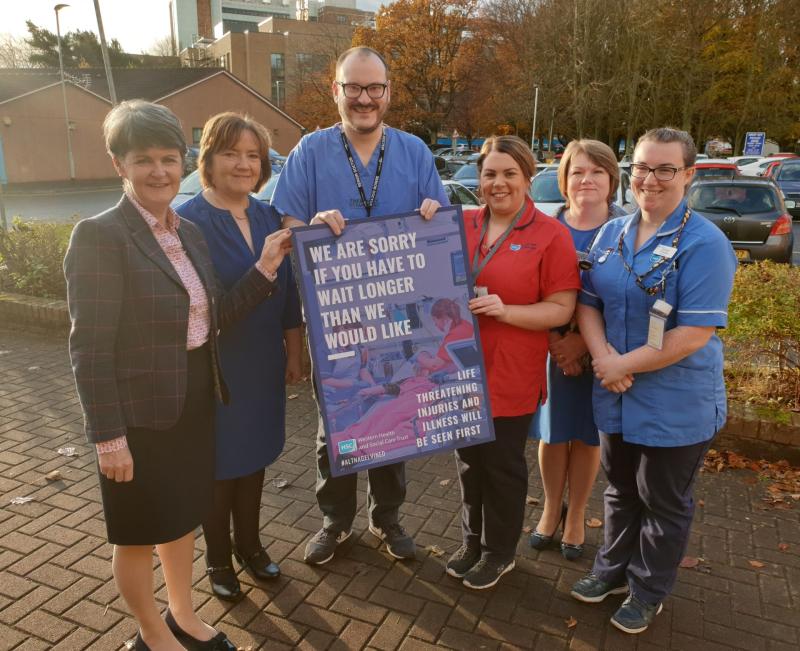 Altnagelvin Hospital’s A&E department expects an “extremely challenging” winter due to a marked increase in patient numbers coupled with “no additional investment” this year.
A “winter pressures” media briefing took place at Altnagelvin today where Geraldine McKay, Director of Acute Services, Mark Gillespie, Assistant Director of Acute Services and Brendan Lavery, Lead Consultant in Emergency Medicine, outlined measures being taken ahead of the busy winter period.
A&E attendees at the Derry hospital have risen year on year since 2015, in the past year alone by 6.7% or 4,385 people, making clear the case for an expanded Emergency Department (ED). Unusually, there has been no lull in numbers since July and the emergency department has come under sustained pressure. "It's fairly relentless seven days a week," said Mr Gillespie.
Mr Lavery outlined a combination of factors including an increase in out-of-area attendees, older patients, and children.
Traditionally Altnagelvin ED treated around 55,000 attendees but that has surged over the past five years. The department was built to hold 40-50 patients at a time, one night last week there were 93 patients in attendance, and the figure regularly sits around 60-70.
The current facilities were not built to cope with the almost 70,000 patients now flowing through its doors each year, that figure is expected to rise to around 74,000 next year.
The Derry News recently reported that the business case for A&E expansion at Altnagelvin has reached its “final stages”. It would accommodate an anticipated 100,000 annual attendees. However, it requires funding approval and ministerial sign-off and delivery is likely to take a number of years.
Pharmacy staff are taking strike action today, December 2, and Wednesday, December 4.
Industrial action will put additional pressure on services throughout December, with Royal College of Nursing members taking action short of strike on December 3 and again on December 10/11, then full strike action on December 18. “That is being managed on a daily basis and a contingency plan is in place,” Ms McKay said.
She added that there has been “no additional investment” this year to deal with winter pressures from the department or health and social care board.
The majority of patients attending are doing so for category 1/2 health care which is deemed “immediate/very urgent”.

A newly published Department of Health report shows that in September a 33.6% of patients arriving at Altnagelvin’s Emergency Department required treatment for “immediate” and “very urgent” health care.
That is significantly higher than any other emergency department in Northern Ireland with, for example, the Royal Victoria Hospital treating 19.2% of patients in the same categories.
All of the issues mentioned above have contributed to missed waiting time targets, in September last year 73.4% of patients were treated within the 4-hour target, that fell to 53.9% in September this year. The number of patients waiting 12 hours has risen from 77 in September 2018 to 458 in the same month this year.
The target to commence treatment within 2-hours also declined throughout July, August and September.
Other hospitals have been similarly affected, for example, In September the Royal Victoria scored 48.5% for its 4-hour target and there were 485 patients waiting over 12 hours.
Ms McKay said the Trust’s priority is to “make sure patient care is safe and therefore whatever we need, even if patients have to remain in the emergency department, we’ll make sure we have enough nurses to look after them and take care of them, and enough doctors to see and treat them in a timely manner. Irrespective of anything else that is our focus.”