Charles 'Ming' Harkin: “A household name and one of the characters of Derry” 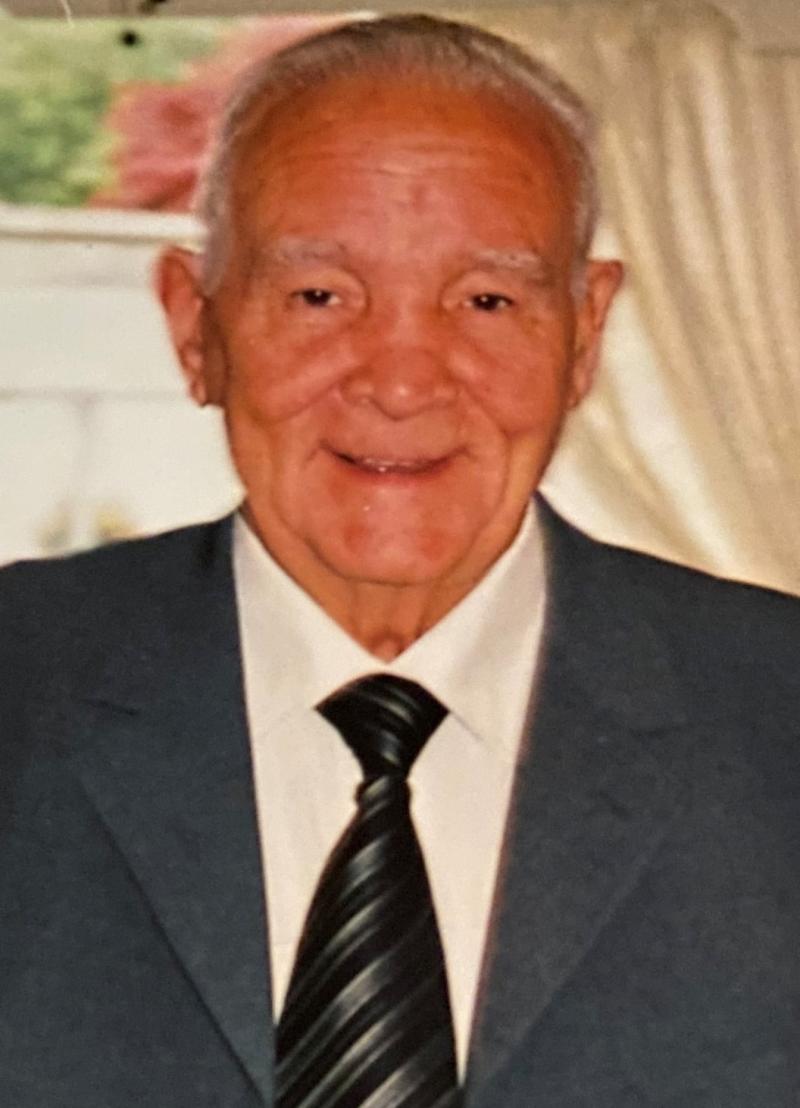 Charlie 'Ming' Harkin who died last weekend. He was a prominent market trader in the city. He also ran a snooker club where he persuaded star names like Alex Higgins & Steve Davis to play exhibitions

“A household name and one of the characters of Derry” says former Mayor of the city and Foyle MLA, Pat Ramsey of his father-in-law, Charlie 'Ming' Harkin, who died last weekend.

Ming passed away peacefully at Rose Court Nursing Home in Ballymena. His funeral is to take place tomorrow on March 9 at St Malachy's Church in Coleraine at 11am.

Born in 1932 into a large family that lived on a street just below the Derry Walls, Harkin began life as a professional boxer before establishing himself as one of – if not the – major market traders in Derry and the North-West.

He would keep his hand in the world of sport having later taken up snooker and, while becoming a highly-competent player himself, ran a snooker club in Derry which would host big names such as Alex Higgins and Steve Davis as Ming managed to draw in the top stars to play in exhibition matches.

But it was the markets where he made his biggest impression with his reputation as “a good man” who “always helped people” would go a long way with the people of Derry who have been fondly remembering him on social media as Pat Ramsey explains.

He said: “Obviously a lot of his peers will have left us by now but you will still find a lot of people on social media saying 'oh I knew Ming' and 'Ming was a good guy' – he was respected and loved by many.

“For the family, it is reassuring to hear the volumes of people coming out commiserating with us and sending us their condolences.

“I suppose the younger generation wouldn't know him but there's others and many, many thousands that would and would probably have a lot more to say than I would have.

“He was always someone who managed outdoor markets in the city. Not just in Derry but in Strabane, Eglinton, Coleraine where there were markets with dozens and dozens of stall-holders.

“Where the Foyleside Centre is, there was a huge volume of market traders at that time.

“And that's how people got to know him. He had various businesses across the city.

“In the 80s, he ventured a bit further and bought property in Tenerife – he owned a bar there. As he got older, he sold them on.

“People got to know him. He was a household name and one of the characters of Derry.

“I'd have people saying to me, 'I know Ming Harkin', 'He was a good trader', 'He always helped people' and 'He was a good man'. That's the sort of calibre of a person he was.

“Ming would have been working right up to his eightieth birthday. He had a great determination about him, a great enthusiasm about work and was always motivated.

“It would be nice to acknowledge the contribution that Ming Harkin made to the city of Derry.”

It was quite a contribution as well. Not just in business but in the world of sport – particularly his involvement in boxing and snooker.

Pat Ramsey added: “Charlie became a professional boxer in his teenage years. Ming had many performances locally at the Guildhall and also fought in Belfast and across England.

“He would have been on the same bills as the (Billy) Spider Kellys of this world (who was both British and Commonwealth Featherweight champion in the 1950s). 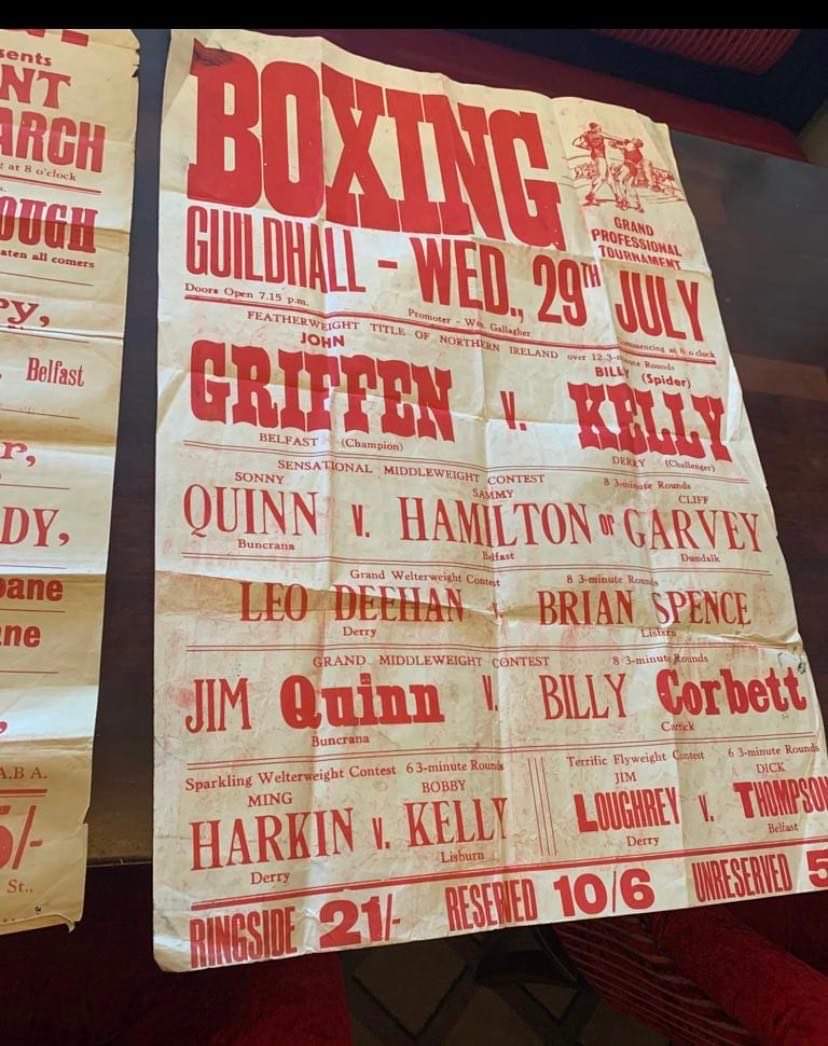 A promotional poster for a night of boxing at Derry's Guildhall in the 1950. At the bottom left is Ming Harkin's own bout

“He then went on to subsequently manage quite a few boxers in and around the city.

“As for his own fight career, I don't think he achieved the level of fighting for any British or European titles.

“In those days in Derry, boxing would have been the thing that young men would have taken part in. There were a lot boxing clubs around the city at that time. Families were keen to get their sons involved with boxing because of the discipline that the sport brings and also that hopefully one of them would do well.

“Ming managed to make a fair living from it and that served him well for future.

“Later on, he developed into a very good snooker player. He got Steve Davis to come along to Derry before Steve was a name at all.

“Ming owned a club in Foyle Street – Ming's Snooker and Recreation Club – and before the game got the television coverage it has now, he would have got top professional players like Steve Davis, Alex Higgins, Doug Mountjoy to come over and play exhibition matches.

“Higgins was some person because of his flair on the table – everybody wanted to see Alex Higgins. Always a sell-out audience because you never knew what to expect from Alex.

“People would be giving over a week's wages to come and see Alex because he was the big star back then.

“Even though this was during the Troubles, Alex, having been brought up in Belfast, wouldn't have had the inhibitions that other players would have had about coming to one of Ming's exhibitions.

“But top players would come along. Steve Davis as mentioned but also the likes of Jimmy White and Eddie Charlton. But Higgins was the star attraction.

“Ming himself played at a high level and his club had various teams. He sort of managed those teams and they all excelled. Not just snooker but billiards as well as a lot of people played that in those days too.”

Funeral from his home on Wednesday at 10.30am for requiem mass in St Malachy’s Church, Coleraine at 11am followed by interment in Coleraine Cemetery.

Deeply regretted and sadly missed by his loving family and entire family circle.