The man who gave the Ponderosa bar its famous name 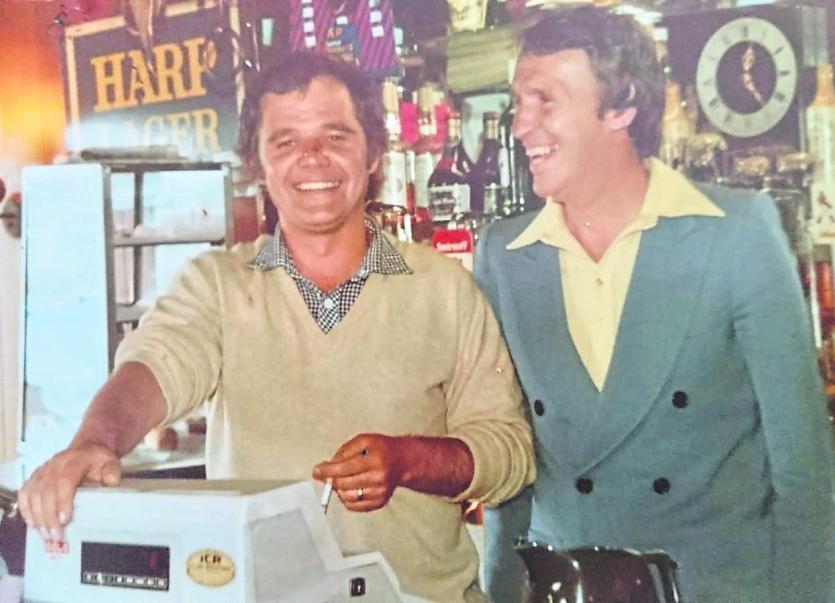 NIALL Regan understood that the art of being a good publican is not just in the drink you serve, but also the yarn that goes with it.

As proprietor of the highest bar in Ireland - the Ponderosa atop the Glenshane Pass - he became a well-known character across County Derry and beyond for his mischievous outlook on life.

A raconteur with a sharp wit and vast catalogue of jokes and puns, he lived nearly 77 years filled with fun and high jinx, love and laughter, anecdotes and tall tales, adventure and resilience.

Born in Maghera in April 1943, Niall was the second child of Matt and Mary Regan (nee Lyle, from Tobermore), a younger brother to Matt Junior, and later followed by Maeve, Terence and Barney.

When he was aged three, his parents bought the old McNicholl’s Hotel on Hall Street, which became their family home, restaurant and pub.

Niall attended nearby Fair Hill Primary School, before moving on to board at St Columb’s College in Derry in the 1950s. 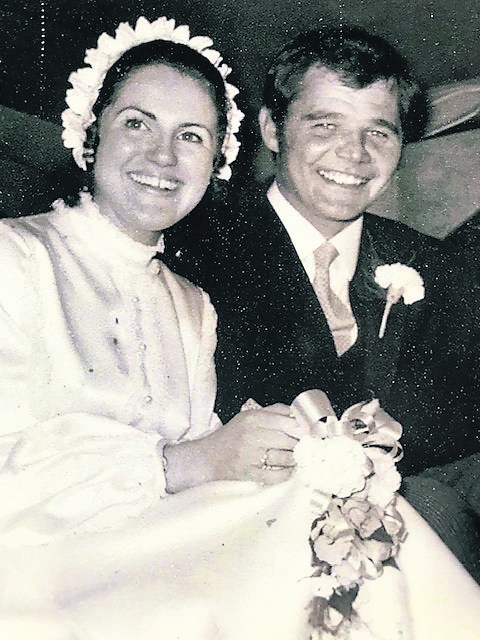 Geraldine and Niall on their wedding day.

He then entered the pub trade, joining his uncle Brendan at the Market Inn in Draperstown. His affable, fun and friendly personality made him a natural barman.

In the late 60s, Niall was at a dance in Dungiven Castle where he met a beautiful young teacher called Geraldine Agnew who was holidaying in Maghera from her native Belfast. They married in 1971 and set up home in Hall Street.

Around this time, Niall was keen to venture into the pub business on his own. He and his father had been leasing a drinking house on the very top of Glenshane called Bradley’s since the early 60s. Niall bought it in the early 70s and put his own stamp on it with a notable new name - the Ponderosa.

The name was a nod to Niall’s father who bore a remarkable resemblance to Ben Cartwight, the lead character in the 1960s television show Bonanza featuring a ranch called the Ponderosa. Niall and his three brothers also looked like the Cartwright brothers. What started as a joke stuck.

Running a pub on the top of a mountain throughout the 70s wasn’t always easy. The Troubles raged and Niall’s remote location made him a sitting duck for raiders.  He had no electricity supply, no telephone and was also at the whim of Glenshane’s notoriously cruel winters. 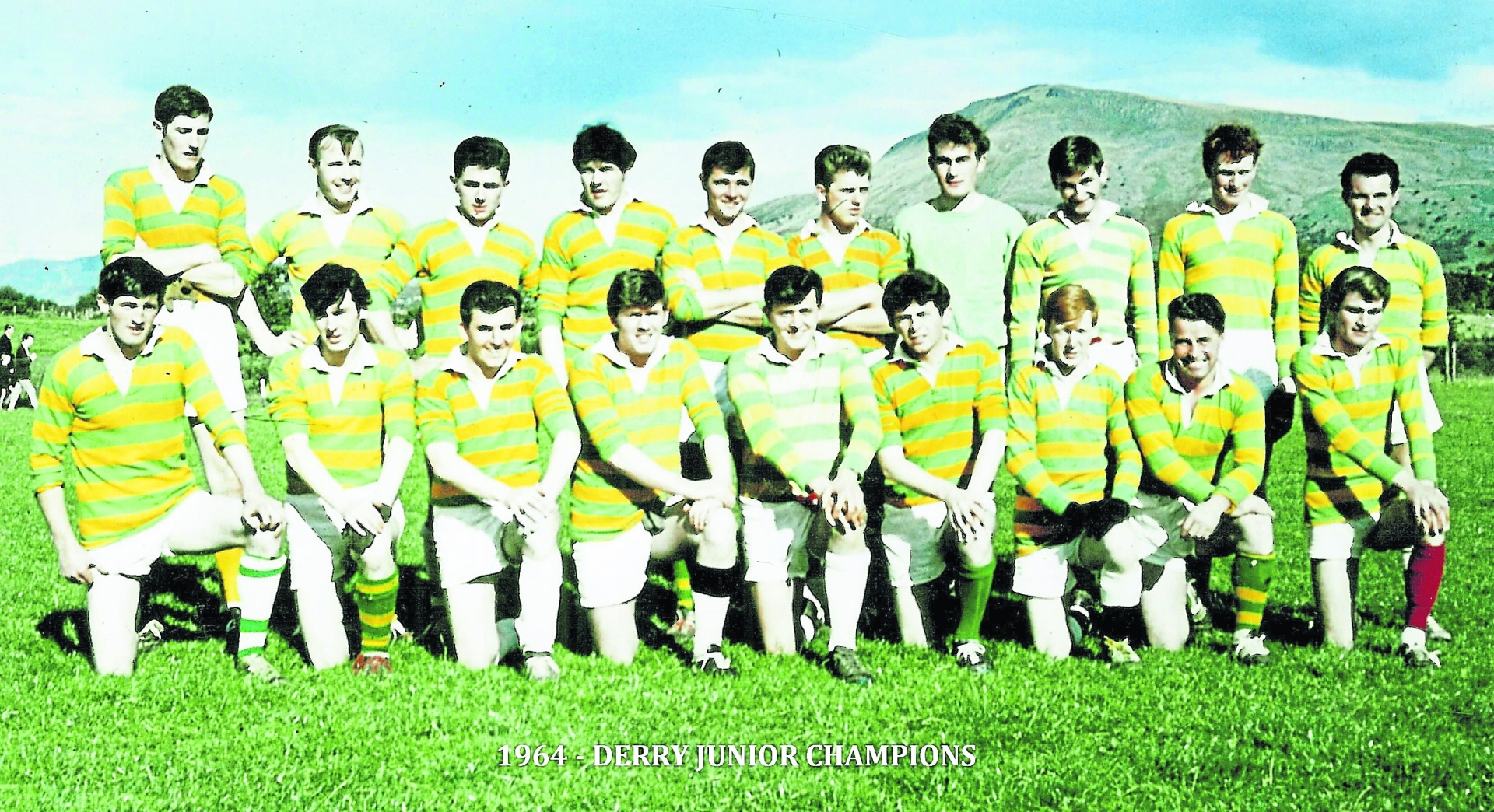 The Watty Grahams championship-winning team. Niall Regan is in the back row, fifth from the left, with his arms folded.

Despite the challenges, he was in heaven with wonderful staff, a loyal dog, a blazing turf fire, an endless pot of homemade soup and a stream of fascinating characters through the doors bringing plenty of stories and news.

It was a popular stopping point for tourists and well-known customers, including Manchester United footballer Paddy Crerand.

The early 80s saw Niall branch out into the snooker club trade and he operated, with others, a handful of halls across Mid Ulster. By the mid 80s, he and Geraldine had three young children. After nearly 25 years of pulling pints at the top of the Sperrins, Niall took the tough decision to sell his beloved Ponderosa.

Away from work, Niall was a talented Gaelic footballer, and was proud to play for many years for Watty Graham’s GAC, Glen.
He was part of the Watty’s team which lifted the Derry Junior Championship title of 1964. He last lined up for Glen at the age of 39 as part of an over 35s match to mark the opening of Watty Graham Park in 1982.

Niall’s father Matt had been an exceptional footballer, playing soccer professionally for Belfast Celtic and Shamrock Rovers in the 30s, as well as Gaelic for his native Ballinascreen and Derry.

Matt was the first Derry player ever selected to play for Ulster in the Railway Cup, and was also the man who brought future England manager Ron Greenwood to play for Belfast Celtic.

Niall was pleased to follow something of his father’s path by pulling on a Derry jersey as a junior player. 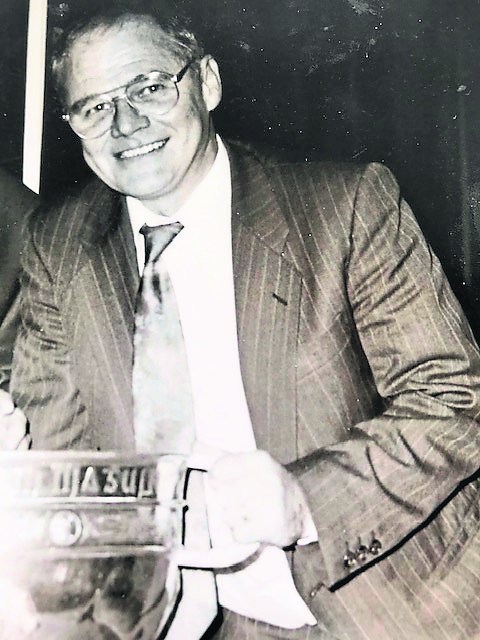 Niall gets to hold the Sam Maguire after Derry's success in 1993.

He remained an avid Derry GAA fan throughout his life and was present at Croke Park for both of the county’s only two All-Ireland finals, in 1958 and 1993. He was, of course, a happy man in 1993.

When Geraldine became principal of St Columba’s Primary School, Straw, in 1991, Niall volunteered to coach the boys’ football, nurturing a squad of young Ballinascreen players as they made their way up through the school.

Niall loved traditional Irish music. He played the tin whistle and sang in a band called Roguery in his younger days. He was the life and soul of any party he attended and never had to take much convincing to sing his favourite, The Mountainy Farmer.

He was an accomplished golfer, playing off a handicap of six at his best.  One of the founding members of Moyola Park Golf Club, Castledawson, in 1977, he spent many happy hours on its fairways and clubhouse over the decades. The same can be said for Dunfanaghy Golf Club in Co Donegal where Niall was granted honorary lifetime membership in recognition of his dedication there.

Niall’s love of Maghera and Derry was matched only by his love of Dunfanaghy where he had holidayed since childhood.

Niall’s later years were marked by ill health after he suffered a life-changing stroke in 1999. He gave up golf but still patrolled the Dunfanaghy links in his Harley Davison golf buggy, acting as course ranger on busy days.

A devoted grandfather and great grandfather, Niall suffered another series of strokes almost five years ago, leaving him with significant disabilities and the on-set of dementia.

He was cared for unfailingly by his devoted wife in these final years. Niall passed away peacefully on Friday 31st January in his Hall Street home. Following Requiem Mass at St Patrick’s Chapel, he was buried in its graveyard, at the foot of Glenshane.

Niall was sadly pre-deceased by his brother Barney.

The Regan family were deeply touched by the large congregation who turned out for his funeral, representing all eras and interests in his full and fulfilled life.