Both the Harry O'Kane and Jack Cassidy Cups are at the final four. 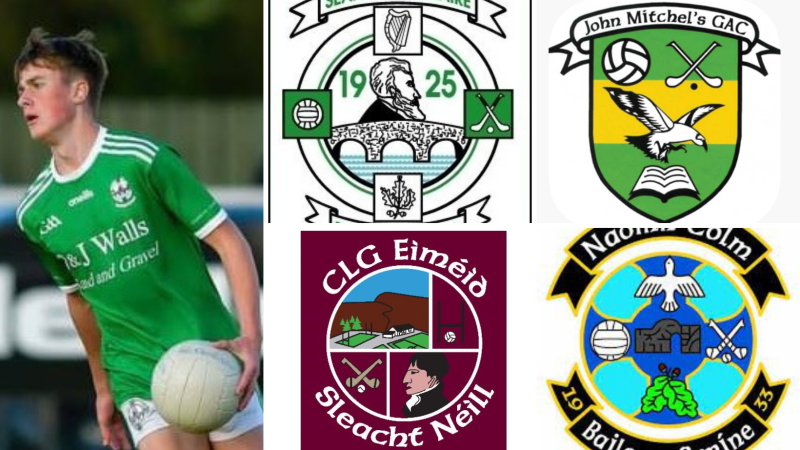 Newbridge's Michael McGrogan netted for Newbridge in the quarter final.

Goals from Barney Darragh and Michael McGrogan helped Newbridge to a convincing ten-point win over Lissan on Friday night.

St Michael's came into the quarter final on the back of a morale-boosting comeback win over Kilrea, but found themselves 0-5 to 0-1 at the first half water break.

The visitors closed the gap to just three points at half time, but a blistering third quarter from Newbridge saw them take a 1-12 to 0-5 lead into the second half water break.

Lissan themselves found the net towards the end of the game, but were matched by Sean O'Leary's, whose second of the game helped them ease home with ten points to spare.

Glenullin edged out a tight battle with Ballinderry on Friday night to clinch a semi final spot.

Their previous game had been a 16-goal thriller, but this one was a much more sober affair, with just a single point separating the teams.

Both teams had a spread of seven different scorers, with Glenullin's decisive goals coming from Michael Óg McKeown and Fearghal McNicholl.

Slaughtneil overturned a hefty half-time deficit to finally see off Limavady and book a spot in the final four of the competition at the weekend.

The Wolfhounds had the breeze behind them during the first period and had built up a commanding seven-point lead, but it wasn't enough as Slaughtneil roared back during the second half of the game.

Jack Cassidy's frees chipped away at the Limavady lead, and levelled the score eventually after a foul on Daniel McCartney.

Further points from Ruairí Ó Mianáin and Conor Coyle were enough to seal the win.

They'll be joined in the final four by Dungiven, who recorded a hard-earned six-point win over Wolfe Tones in Bellaghy.