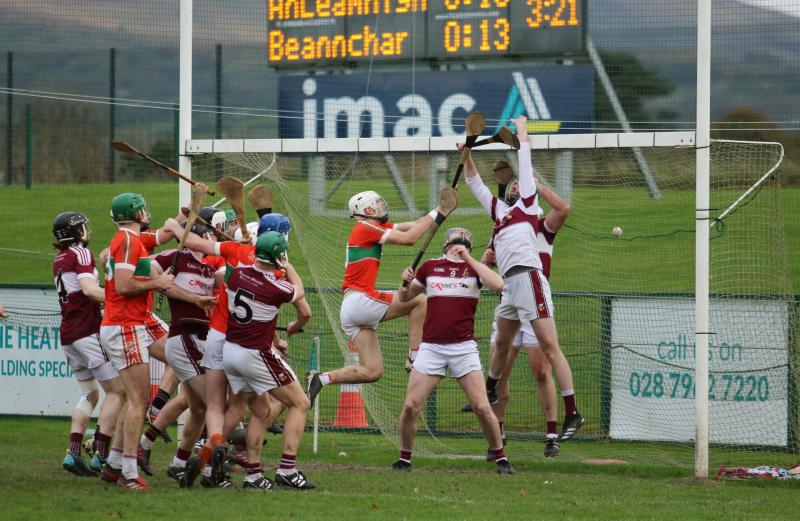 A late Fintan Bradley free drops just over the bar as Lavey chased a goal. Pic by Mark Doherty.

Banagher survived a late scare to clinch the Derry intermediate hurling title with victory over Lavey at Owenbeg this afternoon.

In the final minute of stoppage time, Fintan Bradley's lobbed free fell just over the bar, with the rippling of the net setting hearts racing around the stand.

Erin's Own will rue a total of 13 wides throughout the game, seven of them in a profligate opening quarter which left the Gulladuff men trailing by 0-4 to 0-2.

It was the attritional encounter that Lavey manager Johnny McGarvey had anticipated, with Banagher's incessant pressing and tackling forcing his side to shoot under pressure.

At half time, Banagher's double-score lead was intact, and although Fintan Bradley's frees kept Lavey in touch, by the second water break St Mary's still had them at arm's length.

The north Derry side had two opportunities to put the game to bed in the final quarter, and were almost punished when Ryan Mulholland blazed a goal chance wide for Lavey with five minutes left.

A frantic final few minutes culminated with Bradley's hanging point that for a moment had hearts in mouths throughout the stand.

Banagher advance to an Ulster IHC meeting with either Castleblayney (Monaghan) or Middletown (Armagh) on the weekend of November 27.