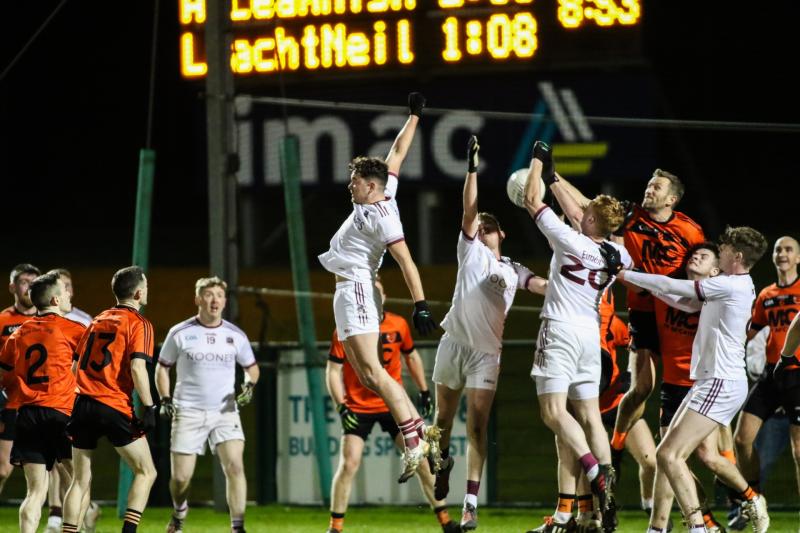 Slaughtneil launch a hopeful ball into the Lavey box during the closing moments. Pic by Brendan McTaggart.

A late Ryan McGill goal saw Lavey end a 34-year wait for a reserve championship title at Owenbeg last week, exacting a modicum of revenge for their senior defeat to Slaughtneil a few weeks ago.

It took extra time to separate their respective senior sides, and last night's game had hints of a repeat before McGill punched to the net in the 56th minute.

Lavey had taken an early lead through a well-taken Ryan Mulholland goal, but the Emmet's had worked their way back to take a 0-6 to 1-1 lead into the half time break.

At the start of the second period, Erin's Own roared back, firing over 0-5 without reply before the water break broke the momentum and allowed Slaughtneil to rally.

They levelled the game with a Shea Cassidy screamer with ten minutes to go, and had surfed the momentum to go ahead, but McGill's goal proved a sucker punch with four minutes remaining.

Slaughtneil launched a late bombardment of the Lavey box, but the defence held firm to allow captain Colm Dillon to lift their first reserve championship title in 34 years.

Man of the Match McFaul banishes the nightmares of 2019

The centre back turned in an outstanding performance on Sunday.