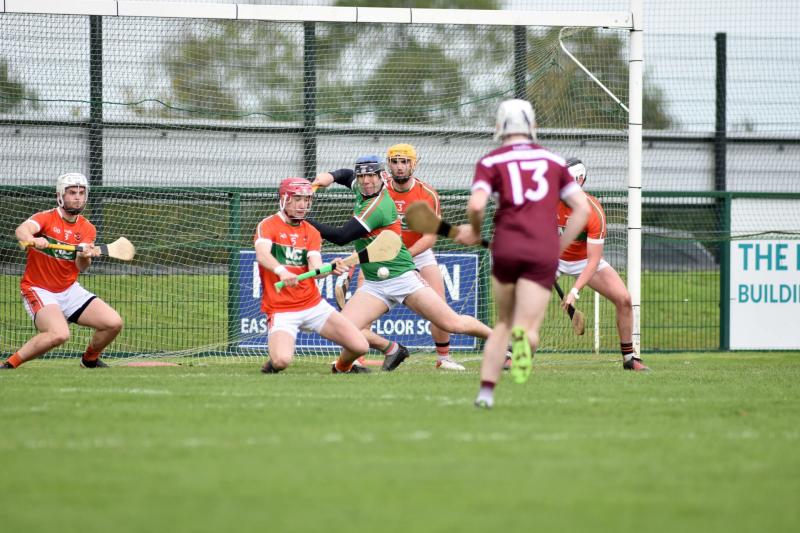 Lavey led from start to finish to book their place in this year's intermediate hurling final with what was a largely comfortable victory.

Last year's finalists Ballinascreen appeared shell-shocked by the intensity of the Lavey start as the Erin's Own men set about making the breeze work for them.

They rattled the net twice inside the first ten minutes, as Ballinascreen, shooting into the Feeny end of the ground, found it difficult to make any headway.

St Colm's steadied themselves either side of the first half water break, as a wasteful Erin's Own struggled to convert their chances.

The Gulladuff men eventually found their rhythm, though, and registered 0-6 in the second quarter to lead by ten at the break. 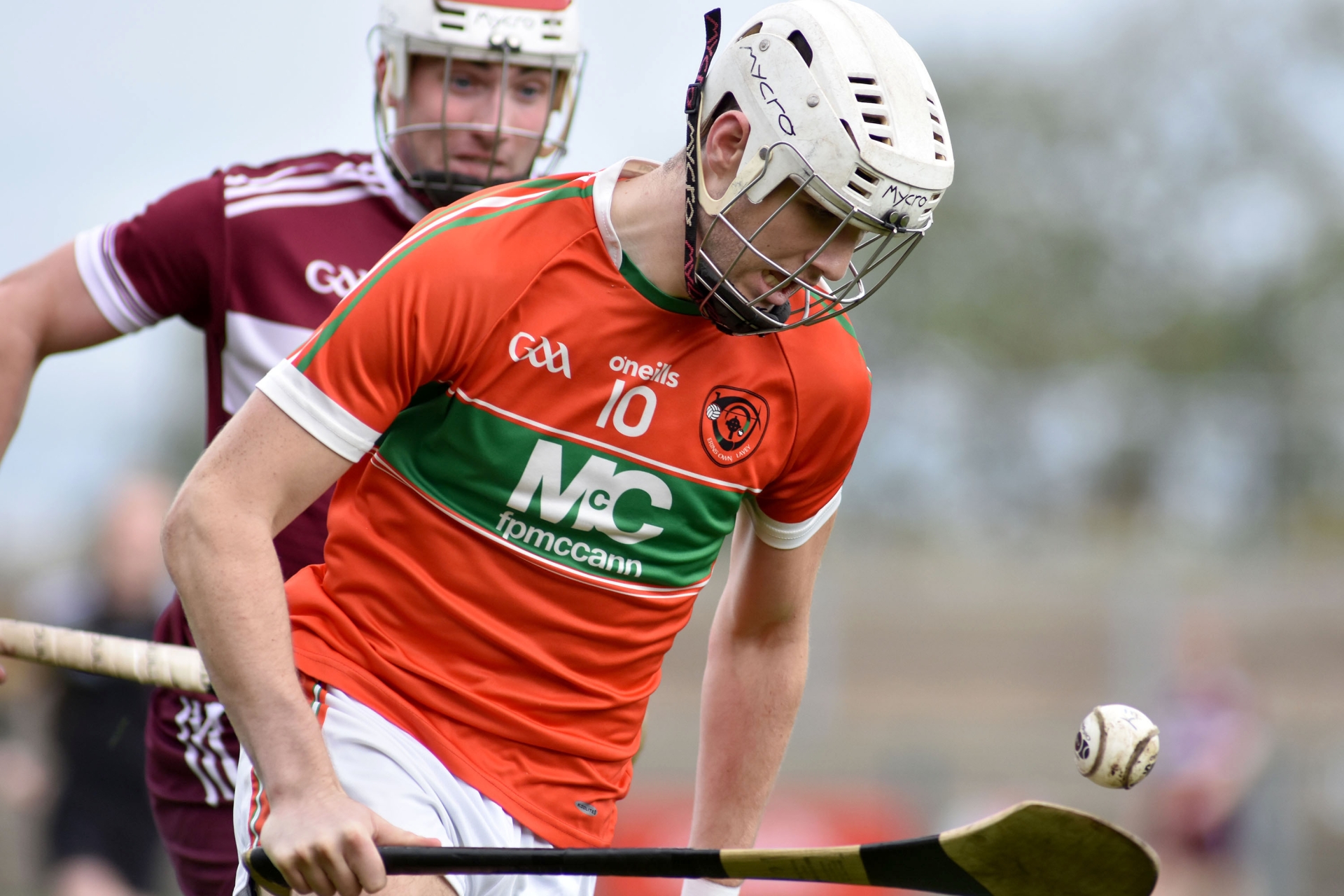 Ryan Mulholland on the attack for Lavey. Pic by Mary K Burke

An early second-half goal from Noel Rafferty raised hopes of a 'Screen comeback with the wind, but Lavey managed to keep consistent daylight between the teams.

Whatever faint hopes they had were dashed by Ryan Mulholland's goal five minutes from time, which sealed Lavey's place in the final.

Ballinascreen had an early chance to go ahead when Ryan Scullion fired wide from a free, and from the puckout, Fintan Bradley latched onto a long ball and dispatched it to the roof of the net.

Ryan Farren collected Ciaran Henry's neat pass to split the posts in the 4th minute, before Ballinascreen goalkeeper Martin Mulgrew was called into action, spreading himself to deny Ryan Mulholland a goal.

The Lavey attacks kept coming though, and on 8 minutes, they found their way through. Sam Dodds muscled his way past a defender and rifled the ball past Mulgrew at the near post. 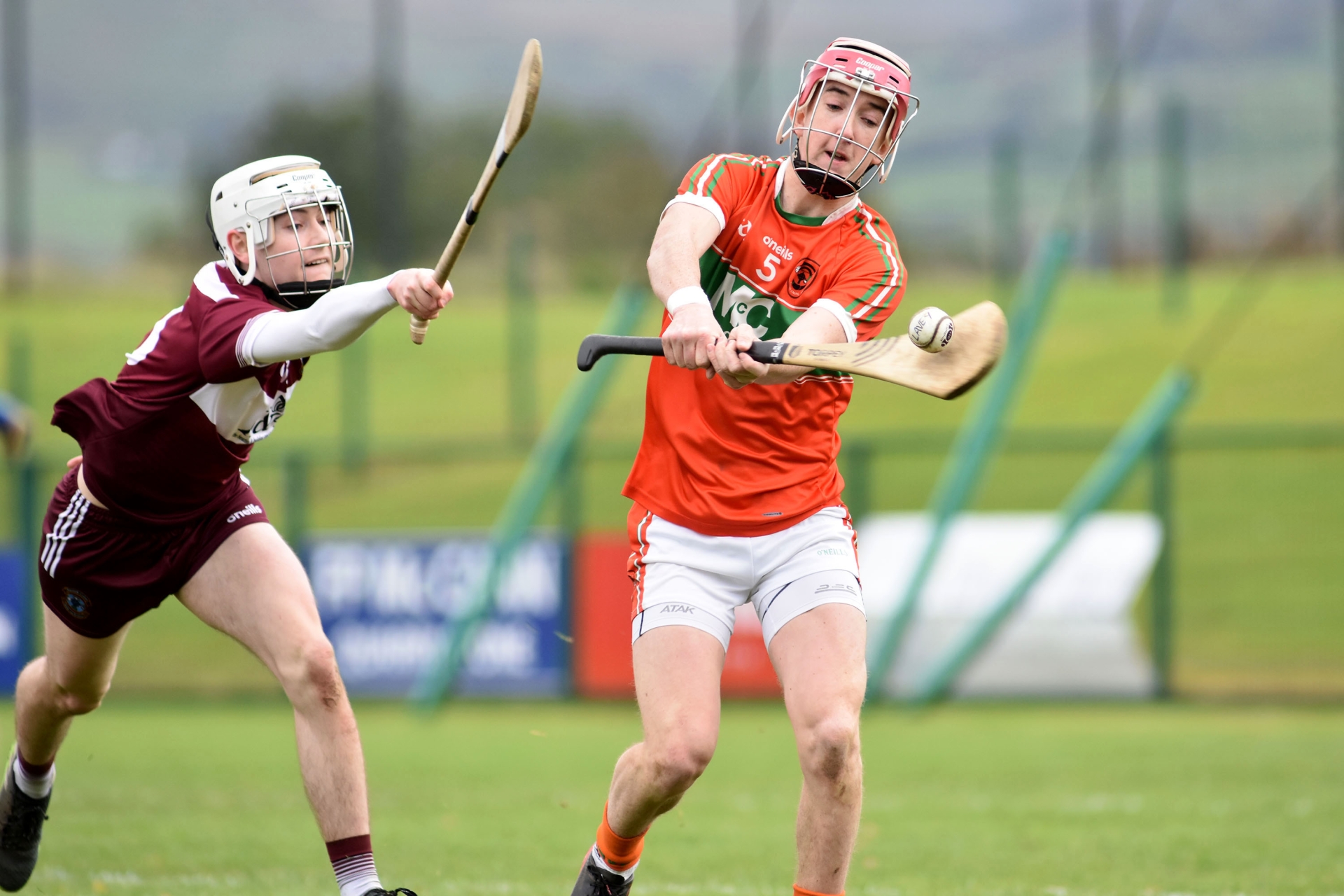 Dodds punished a Daire Kelly error almost immediately to add to his tally and send Lavey into a 2-2 to 0-0 lead after just 9 minutes.

Ballinascreen lifted the siege somewhat four minutes later, when a foul on Emmett Donnelly allowed Ryan Scullion to get them off the mark.

Eamonn Conway then broke through on 15 minutes to split the posts and reduce the gap to six points at the first half water break.

Scullion notched 'Screen's third point on the restart – a free from the edge of the D – but Lavey hit back through Ryan Mulholland and a hattrick of points from Fintan Bradley.

Neat footwork from Liam Murphy gave him room to pop a hand pass to midfield partner Eamon McGill, who surged through to leave Lavey ten point up, before Ballinascreen conjured a goal chance. 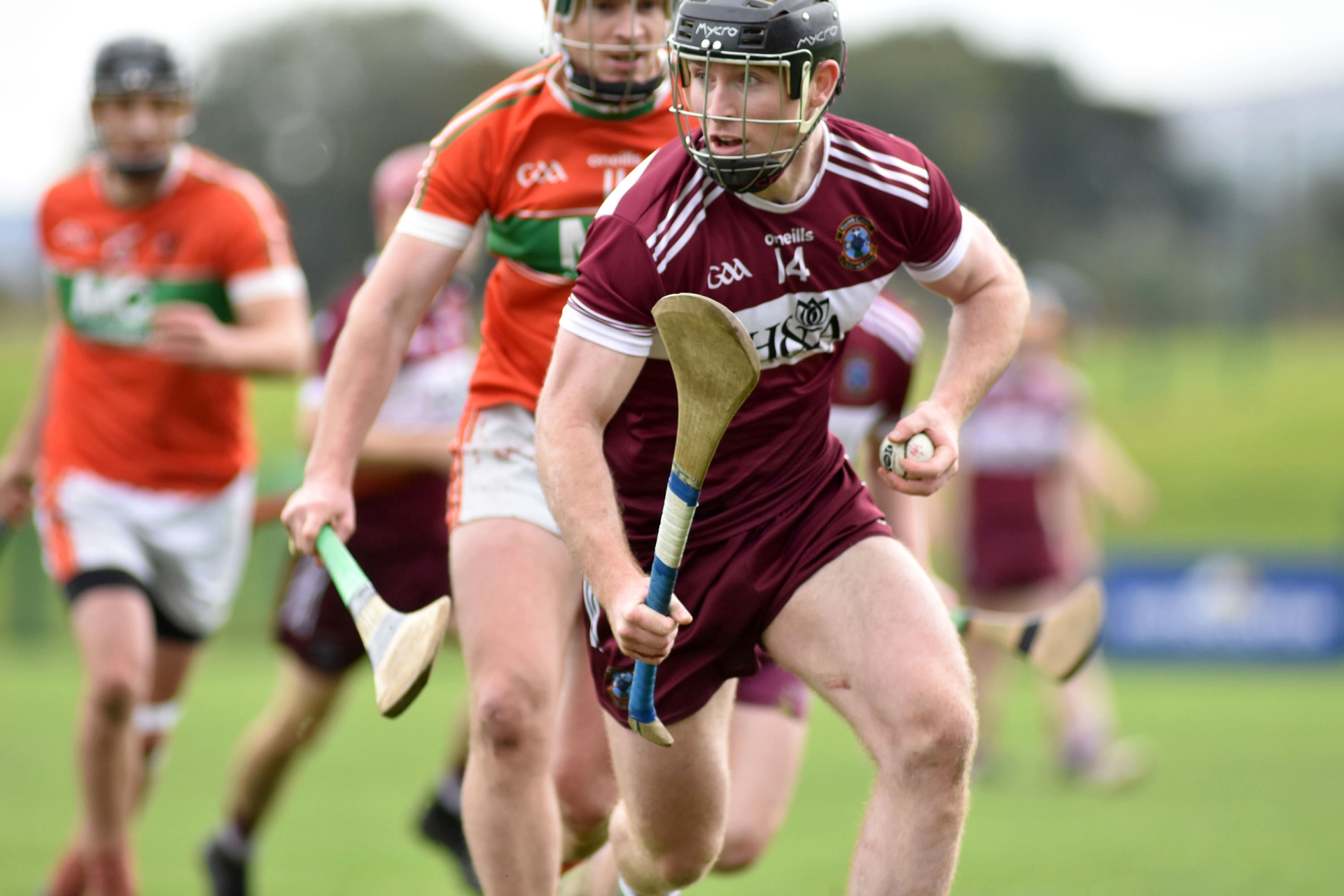 Emmett Donnelly capitalised on a mistake from Colm Dillon and cantered through on goal, but his attempt to lob Eoin Mulholland was tipped over the bar by the Erin's Own goalkeeper.

Lavey almost responded in kind, desperate Ballinascreen defending seeing the ball out for a 65, which Fintan McGurk landed to leave his side leading 2-8 to 0-4 at half time.

With a stiff breeze at their backs, Ballinascreen surely hoped for a reaction at the beginning of the second half, but Lavey started best.

Points from Ryan Farren and Eamon McGill signalled that the wind was not necessarily the answer to 'Screen's problems, but the St Colm's men found a lifeline on 35 minutes.

A high ball dropped in front of Lavey goalkeeper Eoin Mulholland, who hesitated and fumbled it, allowing a grateful Noel Rafferty to seize on the error and tap to the net.

Rafferty had tasted blood and wanted more. He drove at the heart of the Lavey defence with the next two balls in, each time drawing a free, which Ryan Scullion converted to close the gap to seven.

After the second half water break, Ballinascreen again clawed their way back up the mountain Lavey had created for them.

Aaron Kelly danced free of his marked to point, before another Scullion free left them trailing by 2-10 to 1-8 as the game entered the last ten minutes.

Eamon McGill then registered Lavey's first point in 18 minutes, but Ryan Scullion landed his first point from play from a huge distance to hit back immediately. 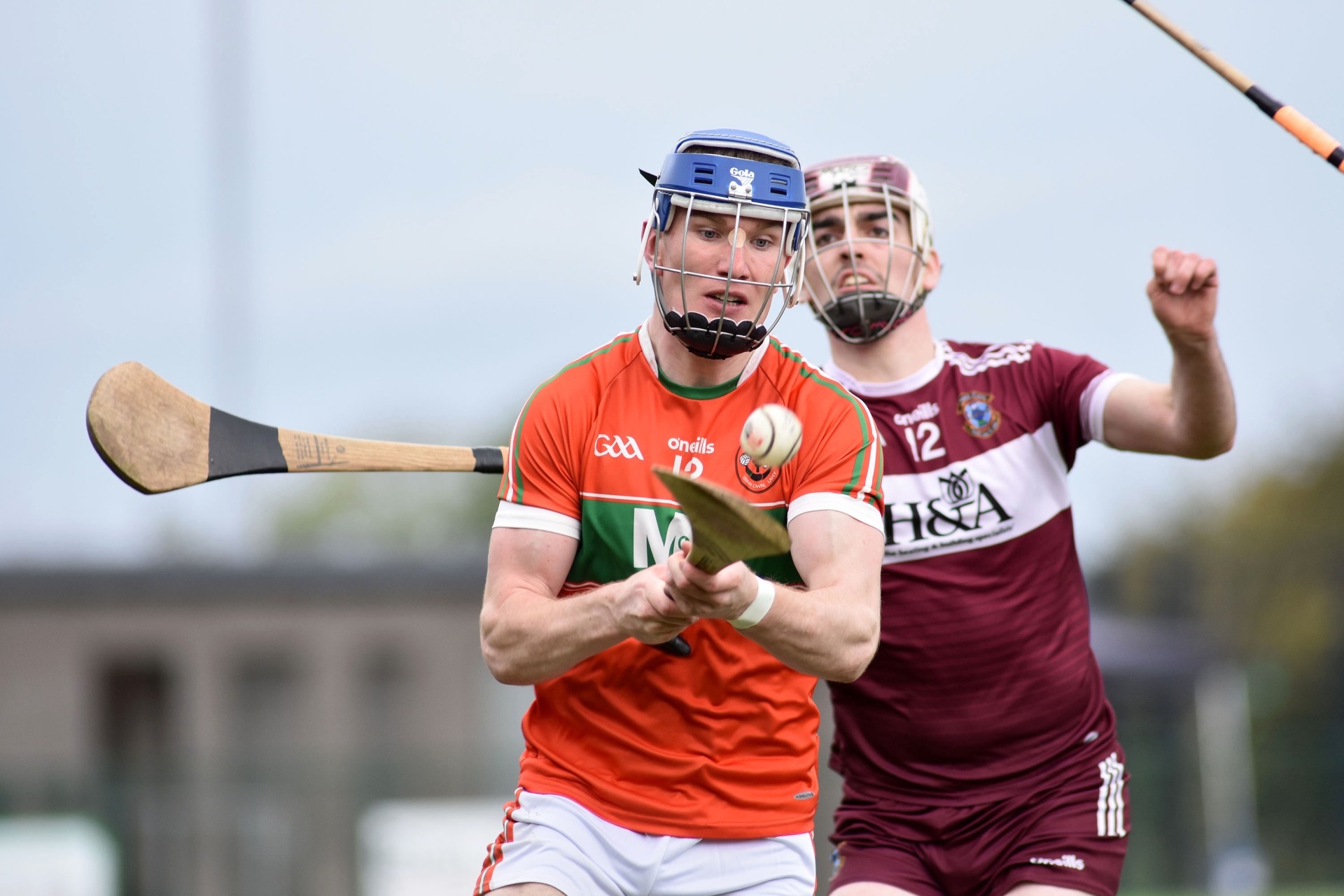 Despite Ballinascreen's mammoth effort to bring themselves back into contention, it felt like a Lavey goal would effectively end the tie, and so it proved.

Sam Dodds trapped a high clearance on his hurl, sidestepped his man and took off towards goal, and Lavey worked the ball through hands to Ryan Mulholland, who hammered the ball to the roof of the net.

St Colm's added a further two points from Noel Rafferty and substitute Conor McSorley, but the scores only narrowed the gap to six points by the final whistle.

A tidy performance, if not a polished one for Erin's Own, but they coped better with the elements than their opponents, hitting 1-3 against the wind to Ballinascreen's 0-4 in the first half.

It took a big effort from St Colm's to stay in the game, and as they searched for the flurry of punches they would need to overturn the advantage, the sucker punch floored them.

Erin's Own managed to hit 11 wides over the course of the game and will need to sharpen up on their accuracy next time out.

MAN OF THE MATCH
Sam Dodds - Fintan Bradley (1-4) and Ballinascreen's Noel Rafferty were in contention, but the nod goes to Sam Dodds, who finished the game with 1-1, and showed a touch of class to bring the ball down and distribute it in the build up to the game's decisive final goal.

TURNING POINT
Lavey second half start - At half time, Lavey faced into an unrelenting breeze, but their start to the half sent a message to Ballinascreen that the elements would not win the game for them. Two early points from Eamon McGill and Ryan Farren gave them a cushion to soften the blow of the Noel Rafferty goal that followed.

SCORE OF THE GAME
Ryan Mulholland goal - The kind of transitional goal that managers dream of. Lavey turned the ball over in the full back line, and a high clearance was batted down to himself by Sam Dodds, who shuffled and took off towards goal, slipping it to Liam Murphy, who in turn found Ryan Mulholland to rifle a finish high to the net.