'Derry City have signed the best player in Ireland' 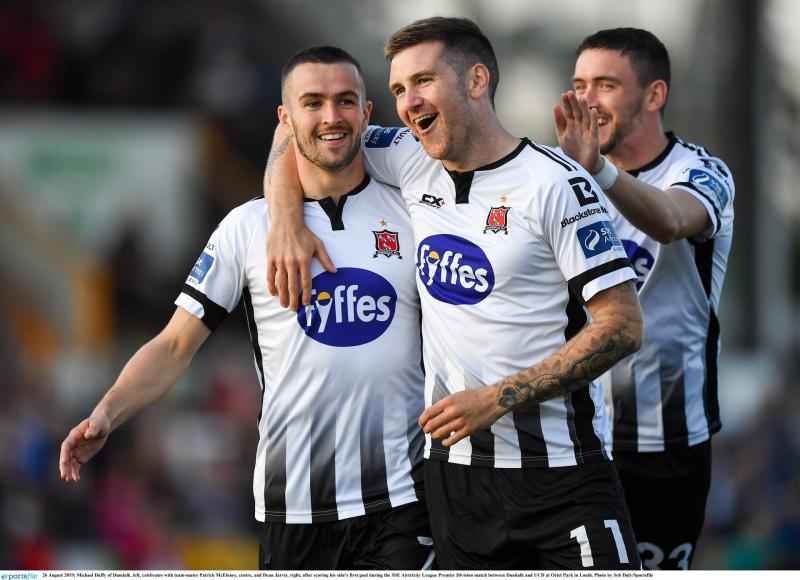 Patrick McEleney and Michael Duffy will play at Derry City next season.

Patrick McEleney believes that Derry City have signed the best player in Ireland in Michael Duffy.

The news that the Dundalk man has signed a pre-contract agreement with his home town club, after 7 years away, has been met with great excitement by Derry City fans, with the 27-year-old agreeing a four-year deal at the Brandywell.

Now that excitement is being shared by McEleney, who has also agreed to return home next year, meaning he will reunite with his long-time friend and team mate in red and white.

“He’s obviously an amazing player,” he said. “I’ve played with him now for six or seven seasons I think and I know what he’s capable of. It’s an amazing signing for Derry. A lot of credit has to go to Derry and to Ruaidhri (Higgins) and Philip (O’Doherty) for getting it over the line. He has been the best probably in the league for two or three years running so hopefully he can continue that form.”

The two Derry men have done it all at Dundalk in recent years, but McEleney admits that the two soon-to-be Derry City players have often wondered what it would be like to achieve similar success with the team they grew up with.

“We have spoken about it before,” he admitted. “Down there I think we’ve won three league titles and FAI Cups and we’ve been in the Europa League and we’ve always said ‘Imagine doing it for Derry’. I think Mickey has said that it is what he wants to do.

“We are Derry men and obviously supporters of the club. I used to go to the Brandywell to watch Derry and I had a season ticket for six years on the run. It won’t be weird, we’re just excited by it and really looking forward to it.”

These are exciting times for Derry City with Ruaidhri Higgins determined to bring success back to the Brandywell, and McEleney is adamant that he wants to be a part of it.

“Ruaidhri was a big pull,” he added. “I’ve played long with him and he was my assistant at Dundalk and I know what he’s about. I’m just really looking forward to coming back. Mickey is one of my best mates so we speak about kit all the time and he’s the exact same. We just want to do really well and bring trophies back. We’re not coming up to put our feet up, we’re coming up to win trophies.”

Meanwhile, City boss Ruaidhri Higgins has admitted that the better team won after watching his team fall to their first defeat in 8 league games with the 2-1 loss at Shamrock Rovers on Friday.

City took an early lead through Danny Lafferty, but the champions hit back through goals from lee Grace and Danny Mandriou to claim the three points.

“The best team won,” he said. “We got ourselves in front with a really good goal early on, but Rovers got a foothold in the game. We were probably a minute away from getting in at half time and regrouping but they have punished us.

“Our players have been brilliant. They have had a lot of praise and pats on the back and rightly so but I think we didn’t reach the levels that we can get to. In key moments in the game we lacked a wee bit of belief and I think we showed naivety and we got punished for it.

“We lost our composure and our first pass when we won the ball back let us down. We’ve had a couple of half chances; Alan Mannus has made an unbelievable save from Ronan Boyce to stop us going 2-0 up, but I can’t have any complaints about the result.”