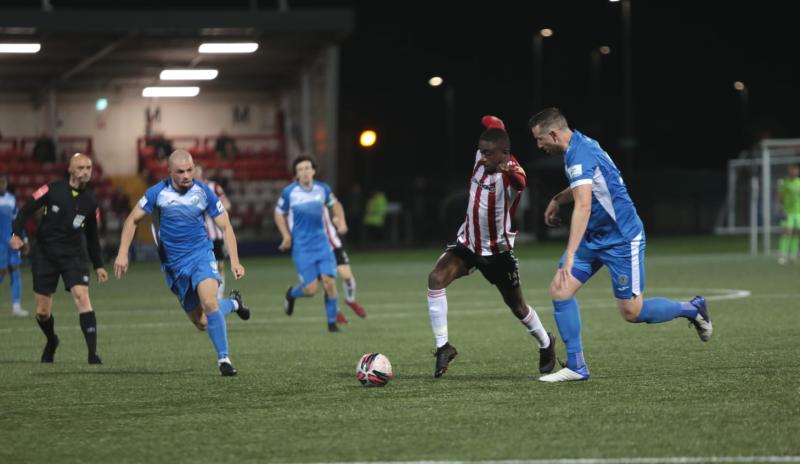 Joe Thomson rescued a point for Derry City and was then sent off at the end of a frantic Northwest derby game at the Brandywell.

It looked as if Harps were going to beat Derry again when they came from behind to take the lead thanks to goals from Jordan Mustoe and Ryan Rainey, after junior Ogedi-Uzokwe had given the hosts an earlier lead. But Thomson volleyed in a brilliant equaliser to deny Harps their seventh win in a row.

City took the lead on 19 minutes. From a Derry City point of view, it was perfection, as Joe Thomson’s drilled cross picked out Junior Ogedi-Uzokwe, who headed powerfully past McGinley to make it 1-0. From a Harps perspective however, it was a scandal as striker Babatunde Owolabi was down injured, but off the pitch when the goal was scored. Ollie Horgan and Ruaidhri Higgins became involved in a heated debate on the sidelines, but the goal stood.

That anger eventually subsided and turned into celebration as Harps equalised five minutes before half time. It was a superb equaliser as well, as Jordan Mustoe spotted Nathan Gartside off his line and curled the ball beautifully over the City goalkeeper’s head, with the ball going in off the upright to make it 1-1.

Harps were celebrating a second midway through the second half, and it was a superb goal again from Horgan’s team. A Harps corner was cleared but it was recycled by Shane McEleney into the path of Barry McNamee, who found Will Seymore on the right, and his low cross picked out Ryan Rainey who hooked it into the net from 10 yards to make it 2-1.

This brilliant match-up still had plenty more to offer and substitute Jamie McGonigle almost made an instant impact when he collected a pass from Lafferty, and immediately volleyed goalwards, but McGinley parried the ball behind. From the corner Joe Thomson then went close from a tight angle, but again the Harps goalkeeper just did enough.

The Harps goalkeeper was quickly turning into a hero for his team as he then denied McGonigle twice, standing strong when the striker was through on goal, and then saving brilliantly after McGonigle was put through by Junior.

Derry pushed and pushed and they finally got their reward on 90 minutes when the ball bounced around the area and finally fell for Thomson who smashed the ball into the net from close range. That sparked a melee between both sides and when it eventually died down both Thomson and goalkeeper Mark McGinley were red carded.

Derry pushed for a dramatic late winner, but harps held on for a point in a breathless finale.