Harps hoping for third win over Derry this season 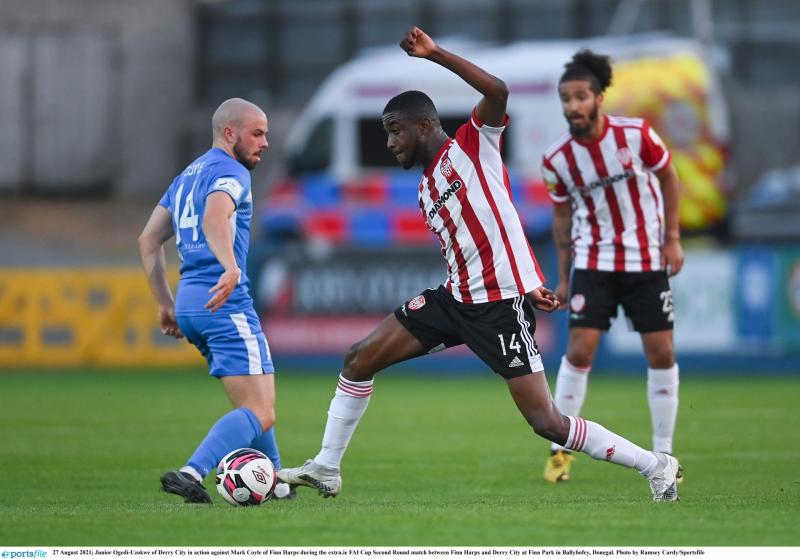 Derry City are hoping to avoid a third defeat to Finn Harps this season when they two teams meet at the Brandywell this evening.

Ollie Horgan’s team won at the Brandywell back in May in Ruaidhri Higgins’ first home game as manager, then knocked the Candystripes out of the FAI Cup to weeks ago thanks to a Babatunde Owolabi penalty.

No Derry City team has been beaten three times by Harps in the same season since 1997/8, and Higgins is expecting that his players will respond well after a disappointing display in their last game at Finn Park.

"I don't mull over it,” Higgins said. “It would annoy you maybe for one or two days afterwards, but then it's back to work and reminding the players about the previous good run of results we've had. Every good team has a bad day at the office and that's what it was for us, but we'll not dwell on it. We're out of the cup, but there's still a lot to play for and I expect us to be much more energetic on the night.”

Harps are currently in an incredible run of form and they arrive at the Brandywell hoping for a seventh successive victory in all competitions, having also beaten champions Shamrock Rovers recently. City are seeking their fifth successive league win themselves, making this derby game particularly fascinating.

“If you look at their last two league games, Harps have beaten the top two, and comfortably,” Higgins continued. “I was at both of the games and they deserved to win both games. The days of people talking about Harps being involved in relegation battles are gone, and if people are asking me about Derry and Europe, then they should be asking Ollie about Finn Harps getting into Europe, because they are right in the mix.

“We’re not doing too badly ourselves so we’ll give it a rattle. We are at home in front of our own fans, our home form has improved dramatically, which has gone hand in hand with crowds getting back in. I’m sure the atmosphere will be brilliant on Friday night and I hope it is, and I’m sure the players will respond to it.  I think there’s a real drive in the players to get back on the horse and kick on.”

Meanwhile, Higgins also revealed he has some sympathy with Drogheda United manager Tim Clancy, who last week vented his frustration at the performances and attitudes of match officials in the Premier Division this season. Clancy’s comments have led to a wider debate on the relationship between managers and officials since.

“I think you should be allowed to voice your opinion in a respectful manner,” he said. “I know Tim Clancy really well and he’s a brilliant fella and he obviously feels that he has been on the wrong end of a few decision and he has voiced his opinion.

“I can sympathise with managers. I can see where people are coming from, but thankfully I haven’t been involved in too much on the sidelines and hopefully it stays that way, but I think it has to be a two-way street. Officials are probably going to have to realise that it’s an emotional game and people are going to be frustrated at times, and as long as it’s not foul and abusive language then I think you should be allowed to show your emotions.”