'It’s a cup game and everyone wants to go as far as they can.' 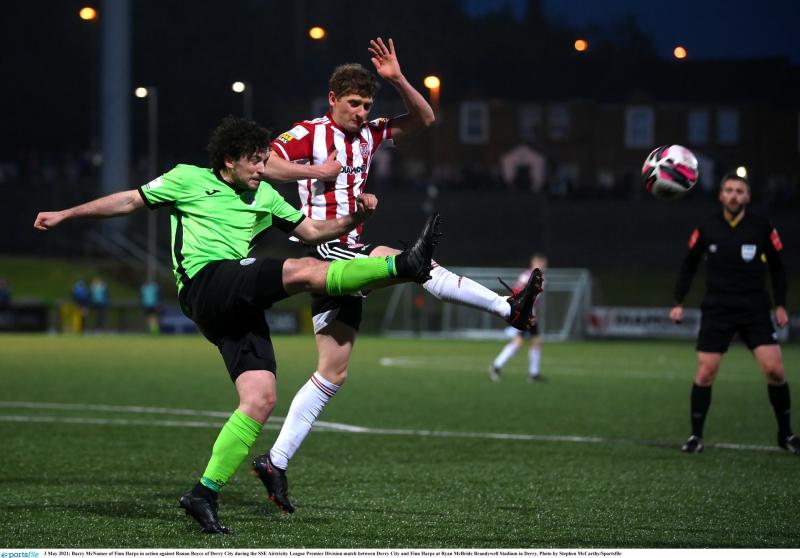 Nathan Gartside has warned that Finn Harps will be ‘no pushovers’ ahead of the most highly-anticipated Northwest derby game of recent years at Finn Park.

Derry City go into the FAI Second Round tie in tremendous form, having won their last five games in all competitions, but they meet a Harps side in great form also, with Ollie Horgan’s men winning their last four games.

Both teams also have one victory apiece over each other in the league this year, meaning there is very little to separate them as they head into tonight’s game.

“Finn Harps will be tricky for everyone,” he said. “They are no pushovers, they are always tough games regardless of where they are in the table. It’s a cup game and everyone wants to go as far as they can.

“The two teams are in good form heading into the cup game, and Northwest derbies are always tough as it is. We’re in form and they’re in form and it’s going to be an exciting game.”

City progressed to the second round with a penalty shoot-out victory at Drogheda United in the last round, and Gartside admitted that the players have been practising from 12 yards again, just in case.

“Coming into the week of cup games we always have plenty of practice with penalties and when you score it gives you confidence and it can lead to a good penalty shoot-out,” he said. “That is the last resort because you want to get it done in 90 minutes, and if you can’t get it done then you want to do it in 120 minutes. No matter what way we win we’re looking to get through to the next round.

After a difficult start to the season, there was speculation that a new goalkeeper would be arriving at the club, with then Cliftonville goalkeeper Aaron McCarey strongly linked to the club. That did not come to pass however, and since then Gartside has enjoyed his best spell at the club, with three clean sheets in his last four games, plus two penalty saves in the shoot-out at Drogheda to help set up the game at Harps.

“I don’t listen to any outside stuff that comes in,” Gartside explained.

“If the club decides to bring someone in, that’s not my decision to make. Every time I pull the shirt on I’ll give 100%. I don’t tend to think about what’s going on in the background, I just want to keep performing and keep playing.

“Clean sheets are always nice to get. Obviously, it’s not just a goalkeeper thing, it’s a collective, it’s the whole team. The three in a row was nice and it meant not having that much work but then, ultimately when I was called upon I was able to do it and made sure nothing went past and gave the platform for the boys to go and score.”

All eyes on Harps

For now, it is all eyes on Finn Harps tonight, with both Cameron McJannett and James Akintunde expected to return after missing the victory over Sligo Rovers due to Covid-19 protocols. Gartside is expecting a tough, and potentially long night.

“They play good football,” he said. “They are tough opponents on any given day and when you go to Finn Park you know you’re going to be in for stages of the game when it’s going to be against you and rough going.

“Ultimately you want to be in the European spots but we are looking at it one game at a time. We have 11 league games left and that’s 11 finals and hopefully we can get as many points on the board and when it comes to the cup, just get as far as you can in the cup.”