Derry City hoping to overcome Harps on their own patch 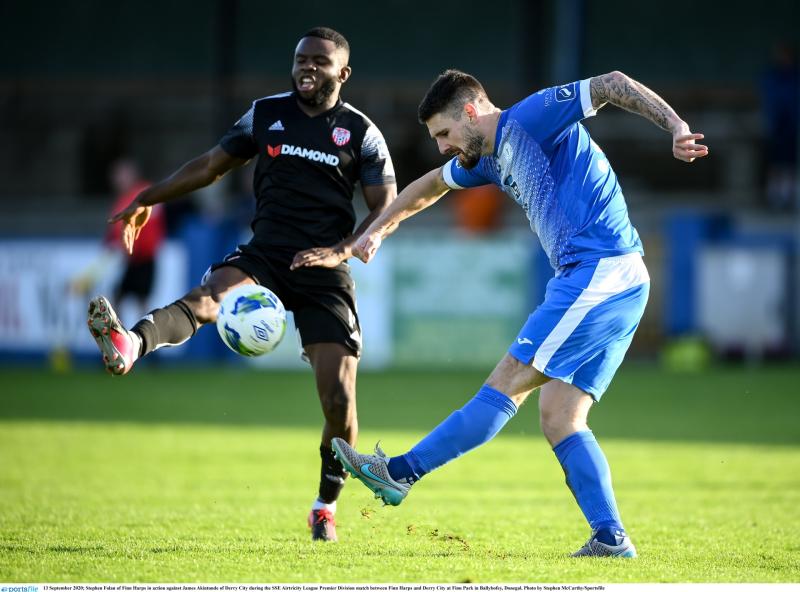 Ruaidhri Higgins believes that the current Finn Harps team is the best he has seen in his time in the League of Ireland.

Harps have made some big strides this season in particular, having briefly sat top of the league after a great start, before they made history with their first ever league win at the Brandywell last month. They have since won just one league game from six, but picked up an encouraging point at champions Shamrock Rovers last week. Derry City now travel to Finn Park tonight having beaten their great rivals just once in the last five meetings.

Games between Derry and Harps are among the most anticipated each year, and Higgins, who is unbeaten in the six games since that loss, believes his team will have to be at their best to get three points against a much-improved team.

“This is the best Finn Harps team since I came back into the League of Ireland in 2005, there’s no doubt about that,” he said.

While Harps were picking up a good point at Rovers last week, Marc Walsh’s last-gasp equaliser earned Derry a point against Bohemians. Higgins has since praised the players for their character in fighting back, but he is still hoping for an improved performance against Harps tomorrow night.

“On reflection and having watched it back, I think we edged the first half and they edged the second half,” he added.

“I do believe that we weren’t as good with the ball as we have been in previous weeks, which was the slightly disappointing factor, but having said that I was delighted with the commitment and the drive of the players to go and get a result that they deserved from the game. I do hope that we are a bit better in possession this week.”

Higgins is also hoping that some big decisions start to go his team’s way, having lost out on what he feels were a number of blatant penalties in recent games. City have been awarded just two spot kicks this season, a number which should be much higher according to the manager.

“We’ve had two penalty decisions at crucial periods in the game last week,” he explained.  “Decisions in particularly in the last month have gone against us. Against Longford, Akintunde goes down at 0-0, the two against Bohemians at 0-0 and the throw in at Shamrock Rovers when we were 1-0 up. It’s all happening very close together. We’re finding it difficult to get decisions at the minute which should have gone our way.”

The manager is remaining positive ahead of a big game in Derry City’s season, and although the Harps defeat is the only blotch on his record so far, he is looking forward to another memorable encounter between the sides.

“It was difficult to deal with on the night and maybe the next day but in this game you have to move on very quickly and we did that and we recovered from it,” he said. “It’s long gone in our memory, this is just another game and another three points, and hopefully we can go there and win the game.”

Defender Cameron McJannett is available to play after picking up a knock against Bohs last week, with Higgins reporting a full bill of health for his squad. Darren Cole is also available after suspension.