Walsh saves a point late on for Candystripes 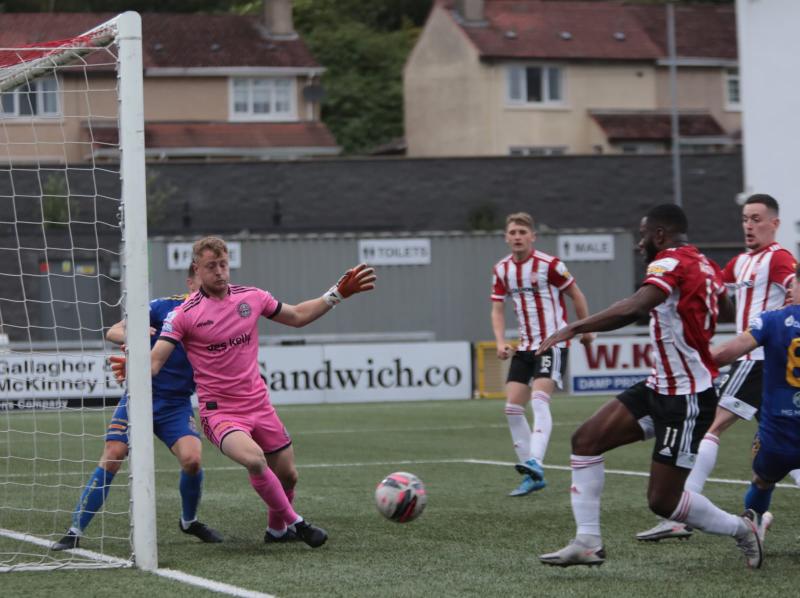 A last gasp goal from Marc Walsh saved Derry City a point against Bohemians in a dramatic finish at the Brandywell.

In the first game back for a small section of City supporters, Walsh struck with 94 minutes on the clock to spark huge celebrations, just when it had seemed that Ali Coote’s late goal had ensured defeat for the home side.

It was a fitting end to an intense game between two well-matched teams.

An intense first half sparked into life when Anto Breslin produced a crunching tackle on Ronan Boyce in the penalty area, but despite huge cries for a penalty from the home side, referee Rob Harvey said no and actually cautioned City boss Ruaidhri Higgins for protesting the decision.

An entertaining first half ended with the home side coming so close to taking the lead. Will Patching’s free kick was headed towards the top corner until Talbot threw himself at the ball, colliding with the post in the process, but with the goalkeeper than grounded, Akintunde could only send the rebound wide with virtually the last kick of the half.

Luck was very much on Derry’s side in the opening minute of the second half as Bohs burst out of the blocks. Ross Tierney went through on goal but attempted to square the ball to Liam Burt, who, under pressure, sent the ball bobbling off the post, before Ciaran Coll hacked the ball off the line with Georgie Kelly closing in for a tap in.

The Bohs goal came just seconds later when Ali Coote found space 20 yards from goal and his low effort flew past Nathan Gartside into the corner to make it 1-0 with just seven minutes remaining.

City had a great chance to level on 90 minutes when Lafferty’s cross picked out Malone in the area, but the midfielder’s header was straight at James Talbot who saved all too comfortably.

Yet there was still time for one more chance, and when the ball broke kindly for Walsh at the back post, he made no mistake to score his first Derry City goal at the perfect time.