Red and white army begin return after 468 days away 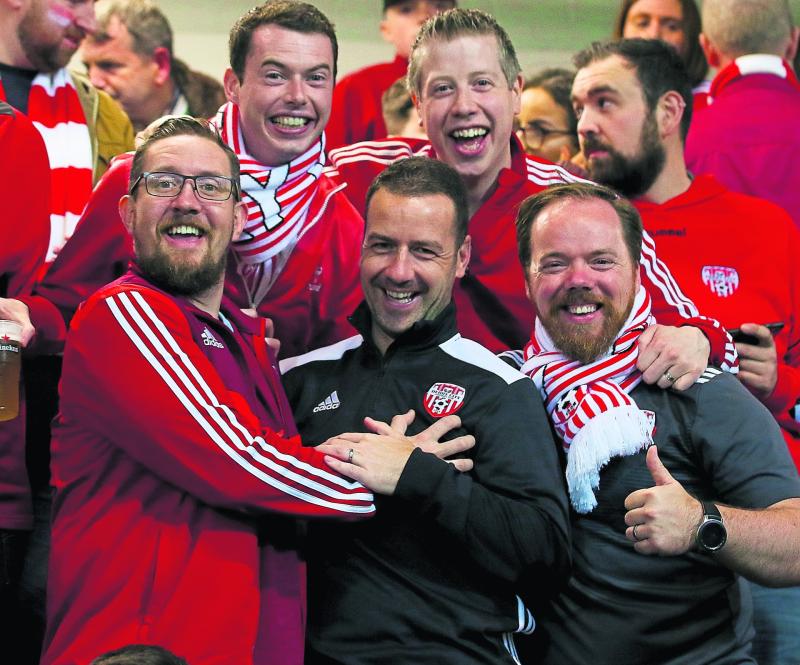 Derry City fans will begin their return to the Brandywell tonight against Bohemians.

It is a moment 468 days in the making as Derry City fans finally return to the Brandywell tonight.

A chosen few have been selected for what will be a ‘test’ event as Derry City FC, in conjunction with Derry City & Strabane District Council and the Public Health Agency, phase the return of supporters in at long last.

The majority of Candystripe supporters will have to be patient over the coming weeks and months, with hopes high that the number of fans returning can increase in due course. In the meantime, the minority attending this evening will be representing those watching at home, as 16 months of frustration finally ends.

City supporter Daniel Friel is one of the lucky ones, and is well aware of just how privileged he is to have one of the golden tickets for tonight’s return.

“I was definitely hoping to get a ticket,” he said.

“I’m happy to get one. As a member I do have access to the new League of Ireland streaming, but there’s nothing that beats going to the matches. I definitely want to be there. Obviously it won’t be the same without the entire crowd and the usual faces around you, but it’s been a very long wait, and probably the only thing I missed during lockdown was going to the matches on a Friday night, so I’m definitely buzzing to be going.

“It will be absolutely surreal but it will be a privilege as well to be in there because I know the demand for these tickets are crazy. I’ve seen Facebook lighting up with people upset that they didn’t get one, but I might get this ticket and not get another one for the rest of the season because of the way the draw is going to work. I’m just so happy to be getting in to watch the team live rather than having to sit watching TV.”

The 2020 season was a miserable one on and off the field, as football without fans became difficult to watch. Friel believes the return of fans will positively affect the players who are finally hoping to claim their first home win of the season.

“It’s not the same as the real thing and it compounded it that the performances on the pitch haven’t been brilliant up until recently,” he explained.

“Last season it was very easy to switch off almost from the live streaming. The players maybe don’t realise how important it is to the town and how much the football team actually matters, so I’m hoping that they get some impression of just how much Derry fans feel about the team and how important it is.

“Where I sit in Block J, is probably the noisiest part of the whole ground and I think the fans definitely feel an affinity with the players; no matter who the players are they are always welcomed and given a chance, and I think that can definitely add another 10%.”

Daniel will be there, bedecked in red and white for the game, although he knows he is still some way off getting back to his Friday night routine. Just being at the Brandywell however, will be something to cherish.

“The colours will be worn, the Candystripes will be on and I will bring a scarf as well,” he added. “Normally the routine would be to go down and have a few pints in Mailey’s beforehand and meet your friends who you sit with, but I think only one or two of them were lucky enough to get a ticket, along with myself.

“I’m sure the Derry fans will be vocal behind the team; I certainly will be and I’m just really looking forward to getting in. Hopefully it’s the first win, but Bohs are a tough team. Bohs have always been an okay team for us of late and I hope it continues.”