'I wish I had used the younger players last season' 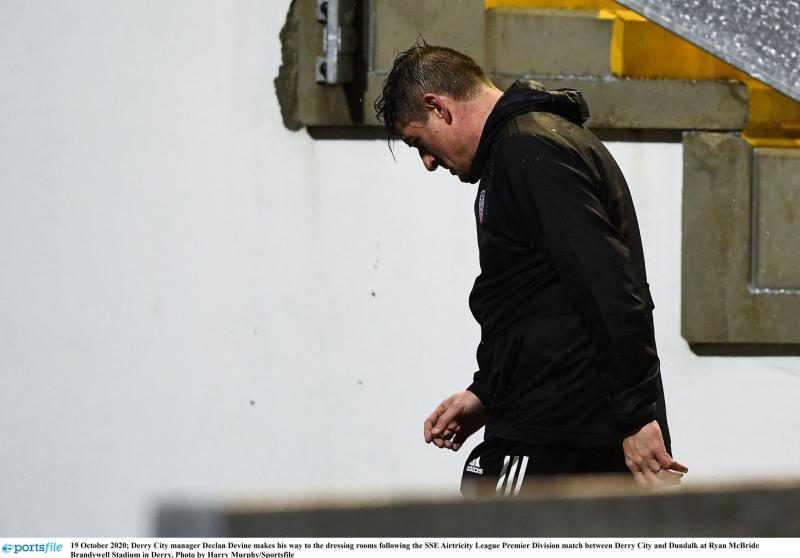 "I wish I had played the young players last year...."

Declan Devine's last words as Derry City manager were ones of regret, after admitting that he should have put his trust in the younger players at the club last season.

Speaking after the 1-1 draw with Dundalk on Tuesday night, Devine reflected on the difference in atmosphere at the club as they headed to Sligo compared to travelling to the Showgrounds for the FAI Cup Quarterfinal last season.

Devine has brought youngsters such as Ronan Boyce, Brendan Barr, Caolan McLaughlin, Caoimhin Porter and Patrick Ferry into the team already this season, and has not been let down despite their inexperience.

In a dismal 2020 season in which the Candystripes finished in eighth place amidst the coronavirus pandemic, Devine signed a number of players from England and Scotland, something he now admits was a mistake.

“That’s the third game in seven days and when you look at the opponents we had, they were tough games, Shamrock Rovers and Dundalk out of the three. You play Dundalk and Shamrock Rovers in the space of seven days with another game thrown in, then it’s going to be a tough week.

“I love coming into my work on a daily basis determined to make these young players better, and if we keep getting the fight and the spirit that we have then I have no doubt that it will go alright.”

The Candystripes travel to Sligo Rovers without a win in six games this season, but on the back of a tremendous performance against Dundalk on Tuesday, when they fought back to claim a point. Mark McChrystal is expected to take the team until a new manager is appointed.

Devine admitted that the Guy King documentary on BBC, which recalled City’s entry into the League of Ireland in 1985, was the driving force behind City’s comeback and overall performance against Dundalk.

“The documentary meant a lot to the players,” he acknowledged. “There’s no doubt that it helped us because we wanted to put a performance in that was full of character and drive and fight, and we won our fair share of fights against some really strong, physical opposition.

“I’ve been talking for two and a half years what this club means to the people of Derry. The players understand it and we talk about this every week. They were all delighted to watch the programme; every single player watched it, their families throughout Derry, Ireland and the UK all watched it. It was just amazing.

“I’m emotional thinking about it. It epitomises what the football club is. Can we get the people back again when this pandemic is over? You seen in the documentary that it doesn’t matter who the manager is, who is team is or how the team is doing, when you get people behind the football club, it has a massive future, and that’s what we’ve got to be aiming to do.”