MAC'S VIEW: 1993 Ulster Final - a wet day in Clones when two Derry fans took their emotions a little too far

After winning Sam in 1992, the next campaign promised much, but ultimately ended in disappointment 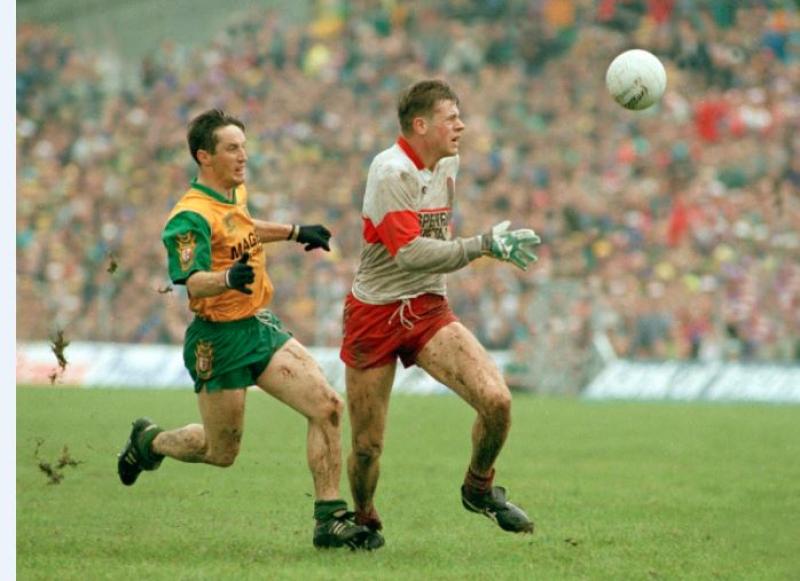 Derry's Anthony Tohill in action against Donegal's Joyce McMullan in the rain in Clones in the Ulster Final of 1993 (Pic: Ray McManus/Sportsfile)

Brian McEniff recalls Donegal's campaign in 1993.  After reaching the league final, their hopes of retaining Sam ended in the rain in Clones.

Our first game after our All-Ireland win in 1992 was against Kildare in the league in Ballybofey.
The GAA was changing the structures of the league, so that season, there were four groups of eight teams and we were in Group B.
Ourselves and Kildare would end up first and second in the group which put us through to the league quarter-finals.
I’d been on holidays in Majorca and arriving back into Donegal that day, it was straight to Ballybofey.
Kildare were a good side that season and I remember going out onto the pitch before the match and who was out there ahead of me but (Kildare manager) Mick O’Dwyer.
I knew Mick well, and the way he looked at me when we shook hands, I just got the feeling he was out to beat us that day.
I went back to the dressing room and reappraised things with the lads. I told them there was no way Kildare were going to beat us on our own patch.
We were down a few men because of injury, but we beat them.
We won all seven games in a group that also saw us play teams like Leitrim, Carlow, Tipperary and Longford.
We met Derry in the league quarter-final that April in Breffni Park. They hit us with two early goals and at one stage, led us by 2-3 to 0-1. But once we got going, we played well and Derry didn’t score again. We beat them by a point, 0-10 to 2-3.
I think Tommy Ryan got his jaw broke in that game.
We played Clare in the semi final in Croke Park. They were Munster champions and going well but we came through to qualify for a league final meeting with Dublin.
We played reasonably well against the Dubs, although not as good as we would have liked. They had a man sent off, I think it was Charlie Redmond.

We were level going into the final few seconds and right at the end, Barry Cunningham was making his way towards goal when the Wexford referee, Brian White blew for full-time.
It was back to Dublin again the following Sunday for the replay. We played poorly. Even though they had Tommy Carr sent off, they beat us by four points, 0-10 to 0-6.

Ulster Championship
In the first round in Ulster, we beat Antrim in Ballybofey. They were hungry and full of running but Martin McHugh was brilliant for us and we beat them by three points.
That put us into the Ulster semi-final against Armagh. It was back to Breffni Park again. Armagh were a good side and it was a really close game. I put Michael Gallagher and John Duffy in towards the end and they helped us battle for a draw.
The following week, we were back for a replay. Kieran McGeeney had made life difficult for Martin McHugh in the first match, so I decided to play Martin at full-forward in the replay. McGeeney followed him in, but he wasn’t suited in there and we got in for a couple of goals. Duffy had a fine game and we won comfortably, 2-16 to 1-7.
The Ulster final that year will be remembered for the state of the pitch after endless showers in Clones.
Even the week beforehand, there were concerns about the state of the pitch in Clones.
But that day, the rain was awful. We were late for the match because of traffic delays. And in the minor match beforehand, one of the Tyrone players suffered a broken leg.
I seem to remember us considering not fielding at all. It didn’t seem right to be playing a game in such conditions but the Ulster Council were having none of it. They insisted the game would go ahead.
We were down a lot of men that day because of injury. I had no Rambo Gavigan and Donal Reid was also missing out of the half-back line.
Anthony Molloy wasn’t fit to start because of injury and we were without Tony Boyle too.
I started John Duffy and he’d a good game. But in hindsight, I probably should have gone with Tommy Ryan that day. Remember he’d suffered a broken jaw, but he would have been well suited for that game. 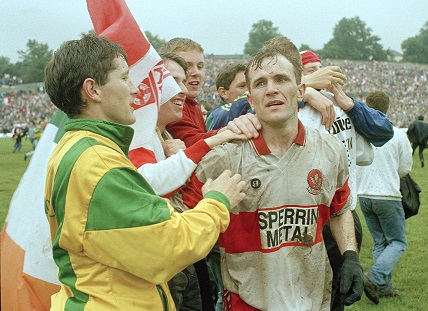 We led 0-5 to 0-4 at half-time, but the second half belonged to Derry and in particular, Anthony Tohill. He was simply outstanding.
I brought Molloy on late in the game, but by that stage, Derry had done enough. They beat us by two points, 0-8 to 0-6. We only got one point in that second half.
After the game, there were big celebrations among the Derry fans. I got struck twice after the final whistle by Derry supporters. I remember Jackie Reilly, Eugene McHale and my nephew Terry coming over to me, ‘cause they saw I was surrounded by Derry supporters.
It was one of those things. In fairness, one of those supporters who struck me came and apologised to me some time afterwards.
I didn’t say much about it at the time. It was just one of those things that happened.
I actually met up with Eamonn Coleman ahead of their All-Ireland semi-final in which they would play Dublin and we talked tactics. We would both give our all on the sidelines in games, but with Eamonn, once the whistle blew at the end of a match, all was forgotten.
Derry went on to win their first All-Ireland at the end of that season, and I was delighted for them.
That day as we left Clones, we were deeply disappointed. Remember, these lads had given plenty of years to the county jersey at that stage. I was thinking that perhaps the time was up for myself as manager.
But on the bus home, Anthony Molloy came up to the front where I was sitting and asked me to give it another year.
I wasn’t really sure what to do, but when Anthony asks you to stay, it’s hard to say no.

Brian McEniff was in conversation with Diarmaid Doherty.