'Toal or Harkin should be Derry City captain' 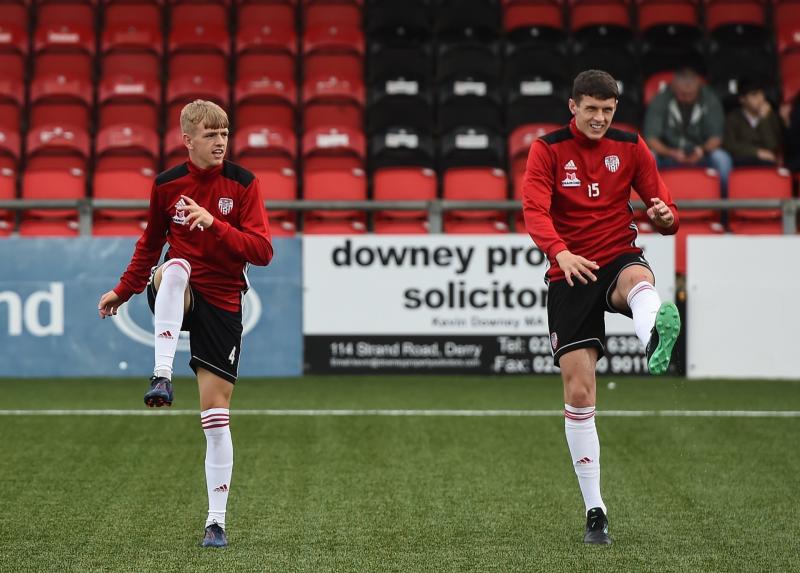 Ciaron Harkin and Eoin Toal have been backed as potential captains.

Eoin Toal and Ciaron Harkin have been backed as potential captains of Derry City after Conor McCormack's move to Galway United left the armband vacant ahead of the 2021 season.
McCormack has left the Brandywell a year into a two-year deal due to personal reasons and has reunited with John Caulfield, who he enjoyed success with at Cork City back in 2017.
His departure leaves Declan Devine looking for his third captain in three seasons, with Barry McNamee and now McCormack no longer at the club.
Club legend and former captain Eddie McCallion, who, with 537 games, is second only to Peter Hutton in all-time appearances for Derry City, believes the armband should be given to a younger player who knows what it means to represent the club. He believes that both Toal and Harkin have the attributes to succeed with that responsibility.
“It wouldn't be bad to give it to a young player that's there,” he explained.  “Danny Lafferty is back but he doesn't need to be a captain. He'll be leading anyway so he doesn't need that. There are players who, if you make them captain, you'll get the extra 10% out of them, but Danny will continue to be the player he always is. He'll not need that responsibility to be a captain. So you are looking at the other players.
“Eoin has done well for Derry so he could be one of the choices. He is highly regarded and he's definitely coming on all the time. He is a young player but he has done well.
“He has been there a few years now so it wouldn't be a bad shout. He has done well last year and he's developing. Derry won't want to lose him so it would definitely help making him captain.
“Jackie didn't play much last year and he was in and out. This could be a big year for him. He has been there for two seasons now so.
“It will be a big year for him and the opportunity is there for both of them  because it is a small squad and they all need to be buying into what is going on and working hard.
“They are going to get their ups and downs and it will be  a big learning curve for them but the opportunity is there for them to go and play and to express themselves.
"Some players thrive on responsibility. It's sink or swim. Some embrace it and others don't and I don't think it would be a problem with either of the two boys.”
Toal is now entering his fifth season at the club having been brought to Derry by Kenny Shields in 2017. Since then he has made 96 appearances and scored 4 goals. Harkin in contrast, returned to the club in 2019, and has made 62 appearances overall, scoring 5 goals.
Both players know the club and the league, and would thrive in the role according to McCallion.
“When Stephen Kenny came he he would always have a captain and then two or three vice-captains,” he continued.
“Peter Hutton was the captain then you would have had myself, Clive Delaney and Gary Beckett, so that whenever Pizza wasn't playing, there was one of us there. It's more responsibility for those there. You do like to see a local player being captain because they know what it's about and what it means  to captain your team.”

McCallion believes that regardless of who leads the team, the upcoming campaign is an opportunity for the younger players at the club to really make their mark.
“They are not going to have a big squad this year, but that's giving the younger players there an opportunity to go in which mightn't have happened before, which could be a win for Derry.
“It happened at Bohs. If the money is not there, it's about developing the young boys there who are coming through. That's the future. That's the important thing."