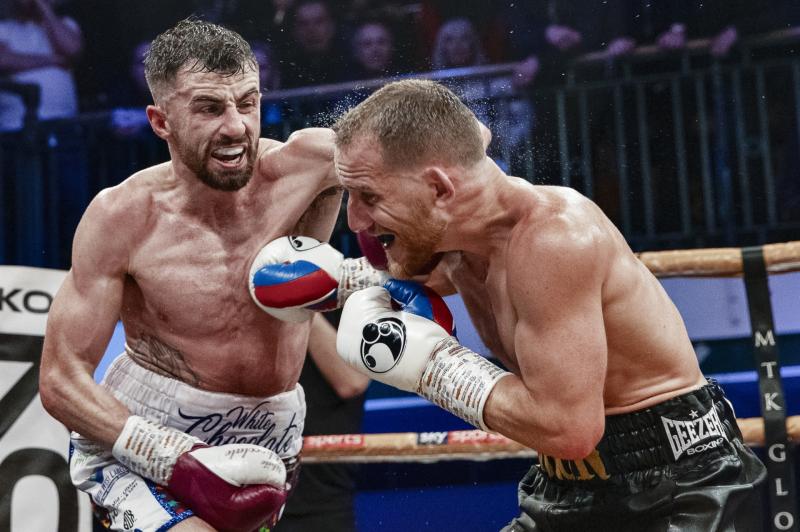 Tyrone McCullagh is raising money for charity this Christmas

You've heard of 'Run Rudolph Run', but this Christmas it will be Tyrone McCullagh doing all the running as he attempts to complete 20k a day for 20 days straight to raise money for Foyle Food Bank.
The Derry featherweight is already eight days into the challenge, graciously put to him by long-time friend and fellow boxer Tyrone McKenna. The two are widely known in boxing circles for their dares, double dares and doing anything to one up the other, and this challenge is the latest between the pair.
With McKenna opting to run for a charity himself, he selflessly nominated his friend in Derry for the same, which was news to McCullagh, who woke up with a barrage of texts informing he he had to run 20k for 20 days straight. The 30-year just took it all in his stride, as he always does.
“I just woke up one morning  and he had it all sorted in one of our group chats,” he laughed.
“He seen that I had been doing long distances anyway and he knows that I'm a good runner so I woke up to the messages one morning.
“He had decided to run 20k a day for charity for 20 days and obviously because it's for a charity and it's around Christmas time, and because it's a good way to stay fit and keep the weight off over Christmas, I thought it was a good idea. I'd happily do whatever I can for charity.”
Tyrone wasted no time in getting started, and will attempt to run the 20k every day until Christmas Eve. Come rain or shine, (mostly rain), he will be out there every day until the end, all with the aim of raising money for the Food Bank.
“I've done six so far,” he said.
“It's tough, I'll not lie. I love running but it's starting to get tough. To be honest, the first day was the worst. It was last Friday that I started and that was really, really stormy. It was easily the worst run I've done, hands down in my life. It was just a horrible, horrible morning. It was freezing and there was hail and everything, it was brutal.
“Since then the runs have been more enjoyable. I'm just starting to pick up wee niggles here and there. My knees are getting very sore and my foot is playing up a bit but I suppose that's to be expected with the distances I've been running.
“It's going to be very tough but I want to give it my all. Even if I have to walk 20k some days I'll do it. Barring an injury which would put me completely out of action, I'll get it done one way or another.”

'Bit of craic'
There are a number of positives in this challenge, despite its difficulties, and Tyrone acknowledges that taking it on at this time of year is probably good timing.
“It's just a bit of craic really,” he continued. “I'm more than happy to do it because there's a lot of eating and drinking done over Christmas so it's a good way to stay fit over that. I have to think of how I can get him back now for the next challenge.
“I'm doing it for Foyle Food Bank and I was speaking to James at the Foyle Food Bank and he was saying that they greatly appreciate it at this time of year. I know it's probably a bad time to ask people to donate because it's coming up to Christmas and it's been such a rough year for everyone, but hopefully I can raise a decent bit of money and help Foyle Food Bank out.”
Tyrone, like most if us, is already looking forward to 2021 and the prospedct of getting back into the ring. His last contest  was 10 months ago when he suffered his first professional defeat at the hands of British featherweight champion Ryan Walsh in the featherweight semi-finals of the Golden Contract. He is eager to get back in there as soon as possible.
“Obviously with this virus, there's nothing in the pipeline at the minute, but I do plan on getting out again as soon as possible,” he explained.
“It's going be a year now come February since I've thought and  it's too long really. I'm itching to get back at it. I will be out again at some stage but when I don't know. Hopefully it's as soon as possible. I'll speak to my manager Jamie Conlon, he's on the ball, so hopefully there will be some fight news very soon.
“I'm bound to be a bit rusty and it will take me a while to get going again, but once I get back down to Dublin I'm sure I'll be as fit as ever in no time.”