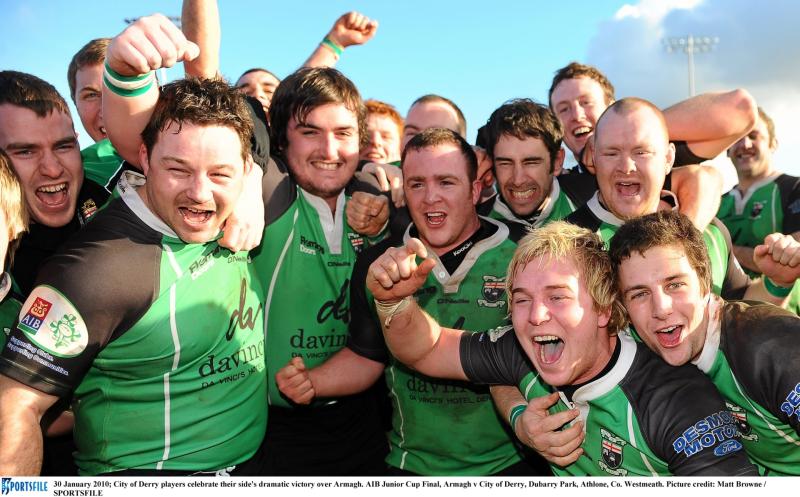 The City of Derry players celebrate after their last gasp AIB Junior Cup win over Armagh back in 2010.

It has been a decade since City of Derry snatched victory from the jaws of defeat in the AIB Junior Final, but the memories remain as sweet as ever for those involved.
An example of just how incredible sport can be, winger Mark O’ Connor struck a kick which went down in City of Derry’s history as his late, late conversion landed the AIB Junior Cup for the Judges Road side for the first time.
In the most dramatic of circumstances, Derry trailed by five points deep in injury time and the trophy seemed destined for Armagh.
Armagh seemed poised for victory at Dubarry Park in Athlone when winger Matthew Irwin crossed for a try after 57 minutes and as the game slipped into stoppage-time they held on to a 17-12 lead.
But City of Derry staged one final rally and replacement hooker Jason Mitchell whipped a pass wide for O'Connor to burst through and go over the try line at the right corner.
That tied the match and extra-time seemed inevitable but O'Connor, who had only landed two from four kicks prior to that, kept his nerve to steer the ball between the posts from the touchline to seal a first-ever crown.
The amazing finale sent the Derry players, staff and supporters into raptures and broke Armagh hearts.
“I actually thought the game was over at that stage,” current Derry coach Richard McCarter recalls. “I hadn't started taking off my tape. It was only when Mark kicked it that I realised we needed the conversion to win. It would have been extra time otherwise. It was a mad ending and we heard afterwards that the cup had the Armagh ribbons on it at that stage, and that made it even sweeter.
“Mark hadn't kicked very well that day and it was actually in my mind to take over the kicking duties at that point. Thank God I didn't because I had absolutely no energy left. Mark mustered some from somewhere and it was an amazing kick; it's the hardest kick in the book, never mind winning the cup as well.”

Intensity
With both sides chasing their first All-Ireland cup crown in their first final appearance, the intensity certainly was not lacking in this clash in a sunny Athlone.
“It was pretty big at the time,” McCarter explained. “The club has just been relegated out of senior rugby. At that stage we were having a pretty successful season in the Ulster Junior League and it looked as if we were going to be there or thereabouts to have an opportunity to get back into Senior Rugby, but to have an All-Ireland final as well, even at that level, was a big thing at the time.”
The Judges Road side made the early running in the first half, and were rewarded when scrum half Andrew Semple claimed the game's opening try after ten minutes.
Derry moved the ball quickly from a tap penalty and with the Armagh defence caught napping, Semple scored in the right corner, with O'Connor missing the conversion.
But Armagh were in front by the 27th minute when two well-struck penalty kicks from Gowing settled his side, who were rewarded for some strong, direct running.
Although Armagh were getting the upper hand in the possession stakes, they were rocked back on their heels after the half hour when an attempted clearance by Gowing was blocked on the halfway line.
His opposite number, former AIB Club international McCarter, made a superb block, collected the ball and raced off for a superb long range try.
O'Connor made amends for an early conversion miss to ensure a double scores lead at 12-6 with nine minutes to go until the break.
But a third Gowing penalty cut the gap to three points in the 33rd minute, and despite City Of Derry exerting most of the pressure in the latter stages of the half - with some excellent runs by the likes of Rudi Moore and David Funston - the scoreboard remained at 12-9 for the interval.
“I still remember it quite clearly,” McCarter said. “I know we started pretty well and Andy Semple got a good try early doors. But then we just stopped playing.
“We played some brilliant rugby that year, but when we and Armagh played each other it was almost like a fear of losing, and neither played to their potential.
“It just became a really cagey match. It ebbed and flowed but they looked as if they were going to sneak it until the end.”

Setback
Derry suffered another setback when lock David Houston was sin-binned for a late tackle and Armagh capitalised immediately as winger Matthew Irwin snuck in for an unconverted try from close range to edge the Ulster Qualifying League leaders back in front at 14-12.
Some more hard work from the forwards was polished off by Gowing as he put five points between the sides, but Armagh's grip on the cup was loosened at the death despite the best efforts of AIB man-of-the-match Tim Clarke who put in a tireless display.
The pressure was solely on O’ Connor, but he kept his nerve to convert his own try to spark jubilant scenes amongst the City of Derry players, management and supporters.
“It was a bit of a scrappy try in fairness,” McCarter adds. “I think Daisy Mitchell threw a four man mis-pass in the midfield and it bounced up into Mark O'Connor's hands. There's probably still a bit of debate if he actually got it down in the corner but the referee and the touch judge gave it so we didn't care.
“We enjoyed the celebrations but at the same time there were so many fixtures that year. I know it was only Junior rugby but we had a hectic fixture schedule back then so we couldn't rest on our laurels.
“Our main aim was to get back to All-Ireland League rugby so as much as that was a sweet victory in the cup, the bigger prize was still there to be played for which thankfully went our way as well.
“We were lucky back then. That was a real part of our success in the years after that in that we had a real mix of youth and experience.
“The likes of Bob and Igor, you just had a mix of young quick backs with some real grunt up front, which made us quite hard to beat.”