'Stute players determined to make Championship stay a brief one 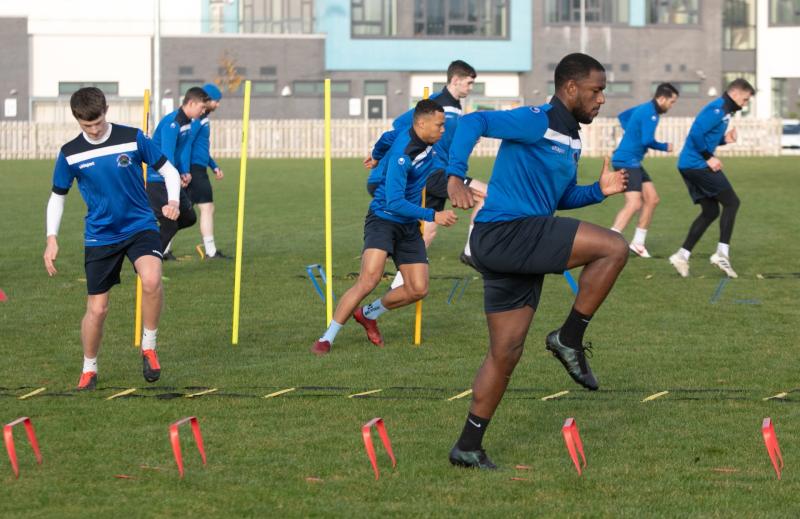 Ahu Obhakhan insists that anything other than promotion hasn't even been considered by the Institute players as their first game in the Championship approaches in two weeks' time.
The 'Stute striker is one of several new faces hoping to make their mark this season by taking the team back to the Premier Division, where the club still feels it belongs.
Obhakhan, formerly of Shelbourne and Drogheda United, joined 'Stute in January and played only a handful of games before the season came to a premature close. Then followed relegation and the fall-out from having the club's Premiership status wiped out from under their feet. It has certainly been a memorable few months for Obhakan in particular.
“It has definitely been difficult, especially in the beginning because there was a lot of uncertainty about what was going to happen,” he admitted.
"You're literally sitting at home wondering when the league is going to start and you're trying to keep fit. We were then told that the season was done, which was definitely disappointing because I came here in January and didn't get cleared until the end of the month. I felt I was only starting to get a run at things around here and then it just ended.”
Manager Sean Connor has made 10 new additions to the squad for the upcoming season and Obhakhan is excited at the potential in the squad, which retains a mix of experienced players also from last year.
“When I came in everyone was kind of on edge but now it's a fresh group and there's a lot of positivity,” he continued.
“We have big ambitions and you can definitely feel that. You can see that the guys from last year are playing with an energy to prove a point and the new guys are feeding off that and it's pushing everyone to be better each session, so it's very good now.
“Personally I don't think I got enough time to put my stamp on the team and I feel that there is a lot more that I can showcase and do for the club and that has played a big part in me coming back this season.
“I just want to get better each day and that's another reason why I've stuck with 'Stute because the coaching staff are very brilliant and they have been teaching me a lot about how I can improve my game. Once you're getting better each day that's when the opportunities come and that's how you progress to the next level. As long as I'm getting better each day then that's an accomplishment for me.”

Pushing on
'Stute begin their Championship season away at newly-promoted Annagh United on November 28, and while it is a fresh start for everyone, Obhakhan believes that the frustration from the club's enforced relegation is motivating a lot of players.
“You don't want to focus on it too much but I feel that it's in the back of everyone's head that we were done an injustice,” he admitted.
“I feel that a lot of the players who have stayed from last year have a point to prove. We have been dealt this hand so it's up to us to go out there and prove why we should be in the Premier League.
“Reduced games means that we can't really afford too many lapses in focus and dips in performances. The stronger we start will play a big role mentally and will even make other teams scared to come and play us.
“I don't think anyone has even considered anything other than promotion. That's the overall goal, and once you believe something, it's achievable.”