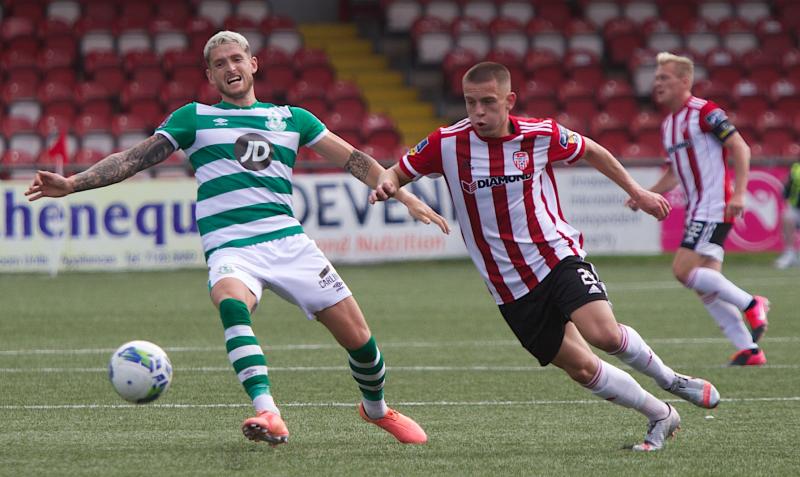 Derry City midfielder chases down Lee Grace at the Brandywell

Republic of Ireland manager Stephen Kenny was in attendance to see Shamrock Rovers come from behind to beat Derry City late on at the Brandywell.

The league leaders were in danger of dropping their first points of the season after Walter Figuira's first half goal had given the Candystripes the lead, but an own goal from Colm Horgan and a follow up from Roberto Lopes maintained the 100% record this season.

Derry kept their shape throughout an uneventful first half, with Rovers bossing possession, but without ever really causing a threat, a half chance for Danny Lafferty, on his return to the Brandywell, the only effort Rovers had in the first half hour.

The first half was drifting uneventfully towards half time when the first goal arrived out of absolutely nowhere. Eoin Toal collected the ball on half way and decided to join the attack, bursting between two Rovers players before finding Walter Figueira on the left wing. Toal continued into the penalty area in anticipation of a cross, which was duly delivered, but incredibly, the ball eluded both Roberto Lopes and Alan Mannus with the ball sneaking into the net past the bemused Rovers players.

Stephen Bradley was far from happy with his team's inability to test Peter Cherrie and midway through the second half he had used all of his substitutes to completely change the look of his attack.

Those substitutions had the desired effect as Rovers finally levelled on 78 minutes, but there was still an element of luck about the goal. Gaffney did well to pick out a cross from the right and a glancing header by Williams went over Cherrie but onto the post before it bounced off the unfortunate Colm Horgan and into the net.

Rovers were relentless after that, and, buoyed by the goal, they went in search of a winner, and they thought they had it when Farrugia went in from the left and picked out Williams, but he was denied from close range by a superb save by Peter Cherrie.

But the goal was coming and City were unable to defend the resulting short corner, Burke receiving the ball in the area before sending it into the mix where Lopes was on hand to fire it past Cherrie to turn the game completely on its head with just eight minutes remaining.

There was a chance late on for a City equaliser when Ciaron Harkin and Colm Horgan combined to set up Figueira, but his effort was too close to Mannus who gathered comfortably.

City continued to push in five minutes of added time and they came so close to levelling when Adam Hamill's cross was met brilliantly by Harkin who headed onto the crossbar before Mannus somehow kept out Toal's follow-up.