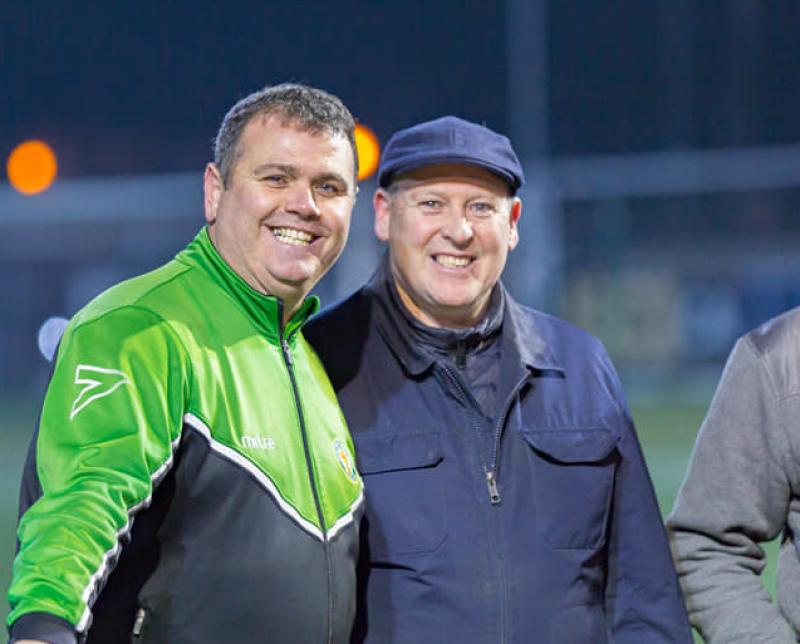 Eamon McLaughlin (left) has been involved with Top of the Hill Celtic for 27 years.

Eamon McLaughlin's phone will hardly have buzzed as much as it did earlier this week when the Top of the Hill coach announced his retirement from the club after 27 years.

One of the most familiar faces in youth football in Derry, McLaughlin has seen it all and done it all since taking the reins at the club in the early 1990s, and in his time there has, with the help of others, elevated Celtic's standing in the town to considerable heights.

Yet with his partner Aisling, children Niamh (16), Cara (15), Caolan (5), Aaron (3) and Riona (8 months) to look out for, a degree in Community Youth Work and a job with Hillcrest Trust, Eamon's plate is more than full.

The recent 40th anniversary celebrations of the club, plus the Covid-19 lockdown, gave the 46-year old plenty of time to reflect on both his past, and his future.

So it was that McLaughlin took to Facebook earlier this week to announce his retirement, prompting hundreds of messages of support and congratulations.

“It was a really difficult decision,” he admitted.

“The timing however has been right for me and my family and the club.

“I have been involved for 27 years and we have never been in a healthier position. We have more coaches than we have ever had, I think around 24 or 25 and in the last months, we have put a new committee in place, so we are in a really strong position. With that I felt the time was right for me.”

It's all a far cry from the day when he was thrust into the top position at the club, just 19 years of age and with little experience of coaching.

“We were in the middle of a season and we had three or four matches in the league and we still had a cup run,” he recalled.

“I was 19 years of age and I was helping Mousey Gallagher out and when he stepped away I was thrown into the deep end because there was no-one else there.

“We kept it going and the likes of Oxy and Damien Doherty gave me a hand to fulfil the fixtures. We actually reached a cup final that season, but we were beaten 1-0 by Ashfield in the Brandywell.

There are so many sides to running a successful football club – but at its heart is the development of youngsters, on and off the pitch, and it is here especially where Top of the Hill has excelled according to McLaughlin.

“The talent in Derry is unbelievable and that's one of the reasons I have always stuck by it,” he continued.

“It's been great to see. Top of the Hill came in 40 years ago, but clubs like Oxford, Trojans and Don Boscos were already established. The talent is out there. For me, hand on heart, I got as much enjoyment from seeing a young fella who never got a kick as I do as someone lifting a cup. It's about development.

“We're slightly different to most clubs - because we're living on the Interface, it's more than about football. I'm a youth worker as well so I've always tried to tie the two in together. At this time of year we would have had trips and interventions to keep young people off the streets and away from rioting.

“I got a text the other day from a young fella in Claudy saying that, more than football, he missed the trips we would do through The Whistle and Hillcrest. It's brilliant to hear that it's not just about football because there are only so many young fellas who will make it as footballers. It's the community spirit and it's the family atmosphere and I hope that continues on. That's a big thing for me.”

Celtic have had their share of big names come through their ranks in McLaughlin's time – Rory Holden (pictured below with Eamon and his brother Niall), Josh Daniels, Michael McCrudden and Darren McCauley some of those to build careers in the game. 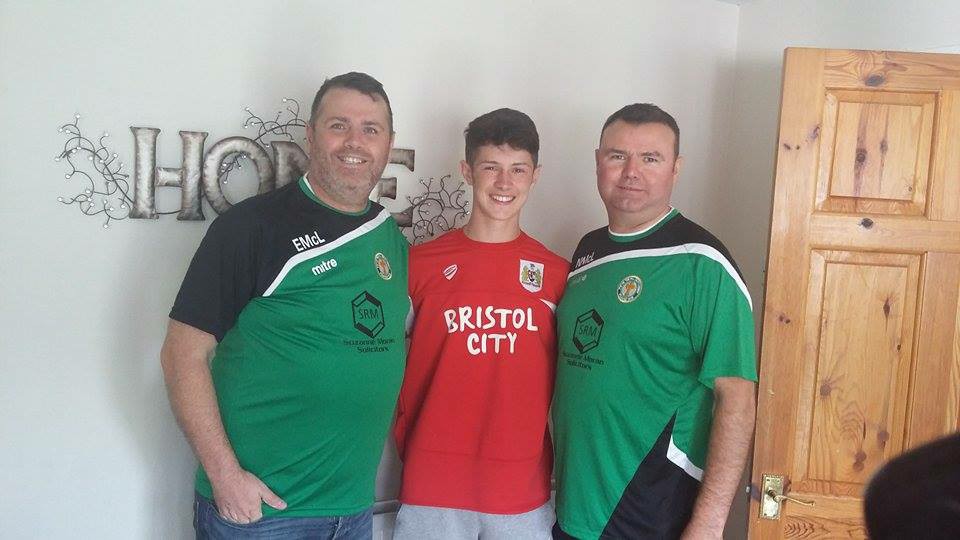 Current Derry City midfielder Jack Malone also has his roots in Top of the Hill and McLaughlin admits that seeing a player reach his potential is the best kind of reward.

It was in fact, McCrudden's transfer to Newcastle United 15 years ago, coinciding with the tragic death of friend and fellow coach Keith Roddy, which lit a fire in McLaughlin.

“Michael, at 15 or 16, was the first ever Top of the Hill Celtic player to go across the water,” he explained.

“At the same time, in 2005, Mickey's mentor, Keith 'Oxy' Roddy (pictured below with Eamon) had died, and at that point I made the conscious decision that 'I'm grabbing this by the horns' and take the club where it needs to be, with the help of the likes of Paddy Logue, Higgs, Gerard Dunlop and boys like that. 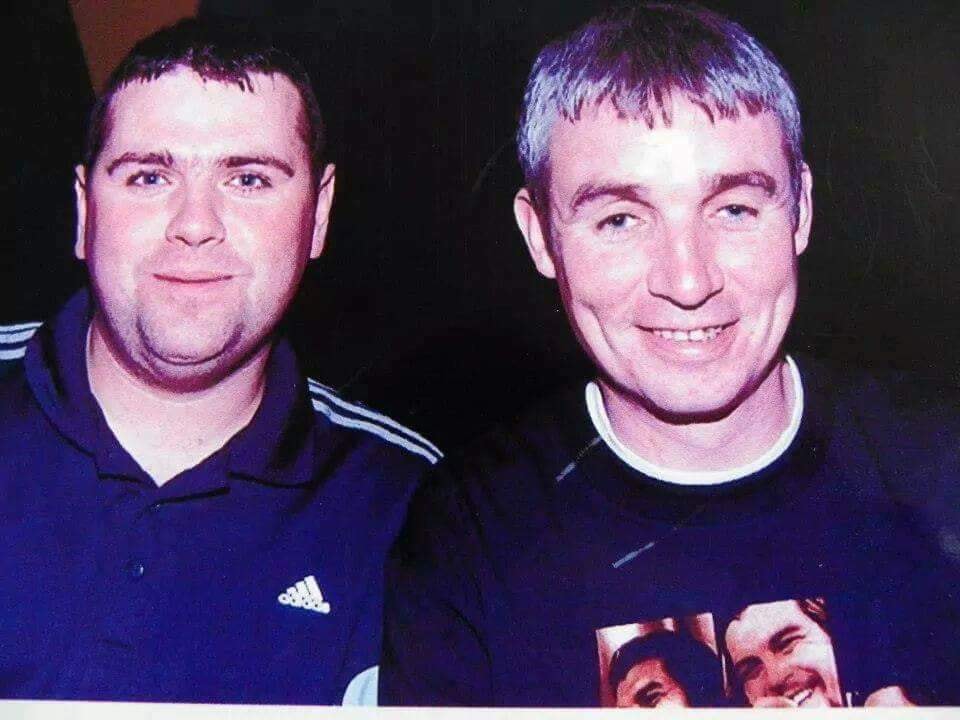 “When I was starting out, boys like Jon Clifford and Noel Crampsey, that's the boys you spoke to and asked advice of. Even though they were your competitors on the pitch, they wrere all in it for the same reasons, and they guided me, but no-one more so than Mickey Hutton in the D&D. Any problems that I had ever with football, he was at the end of the phone, and the support that the D&D have given us as a club hasn't gone unnoticed over here.”

2020 is the first year that the Foyle Cup has not run in the city since its inception in 1992, and while it is a loss for every club throughout the city, McLaughlin cannot wait for its return – with the tournament holding a special place in the Top of the Hill calendar.

“We try to get at least one team in every age group if possible,” he said. “Some teams aren't great, some are better than others, but they still get the opportunity to play in the Foyle Cup, and that, for me, is amazing. If you're winning 10-0 or getting beat 10-0, your family are there supporting you during the Foiyle Cup, savouring the atmosphere and meeting new people. The buzz about the whole city throughout the week is phenomenal.”

His time with Top of the Hill, for now, has reached an end, but the green and white will remain in his blood, and when football returns, he will likely be the first on the sidelines cheering on his team.

“Top of the Hill has been my life for 27 years, without a shadow of a doubt,” he stated. 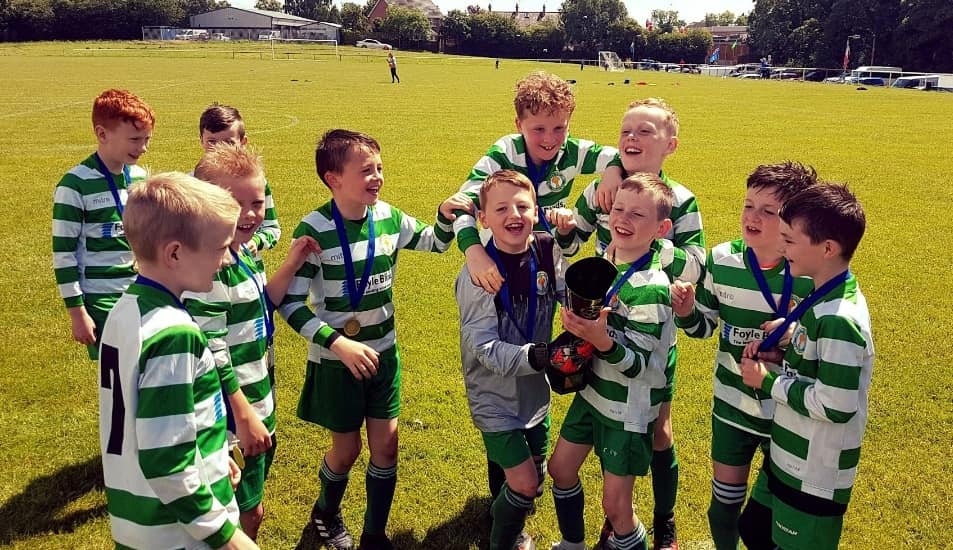 “It's meant absolutely everything and will continue to mean everything to me.

“It has given me some amazing memories and it will always be one of the proudest things that I've done in my life.

“Without the help and support of so many people – even the likes of my mother and sister, it all runs in their veins. Seeing the club celebrate it's 40th anniversary last year probably sparked off my thinking that maybe it was time to move this on. The Covid thing gave me time to reflect and think – we are in a healthy spot at the minute and we need to have every faith in the boys who are going to take up the baton and run with it.

“The amount of coaches we have now is credit to where people see us. You mightn't be as big a club as Tristar or Oxford, but we're well up there.

"The respect that Top of the Hill Celtic has throughout the city is phenomenal.”