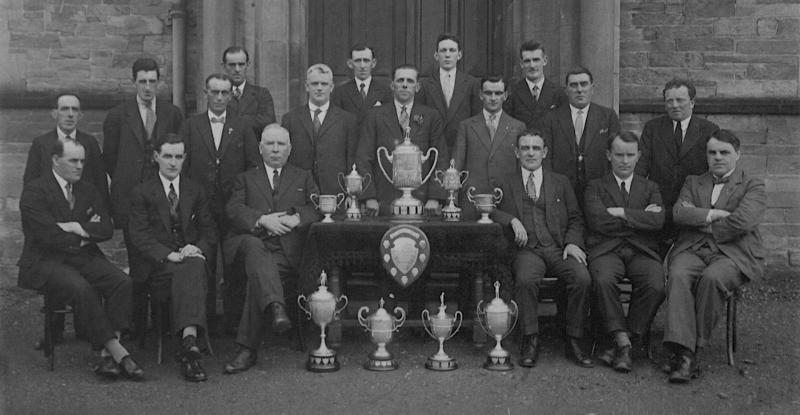 The Derry and District League, a permanent fixture of local football in the city since 1921, is set to fold just two years shy of its 100th birthday, despite the best efforts of its committee to reach the century.
The D&D, traditionally a Sunday morning league, has struggled for a number of years now but recently moved to a summer midweek league in an attempt to resurrect the interest in the competition. But that roll of the dice has unfortunately failed, and the committee has admitted they now may have no choice but to finish up just a number of months before its century.
Thousands upon thousands of players have come through the D&D over the years and whether naturally blessed with a football or whether it was just to blow off steam on a Sunday morning, memories of the association remain strong, even for players who have ling since hung up their boots. 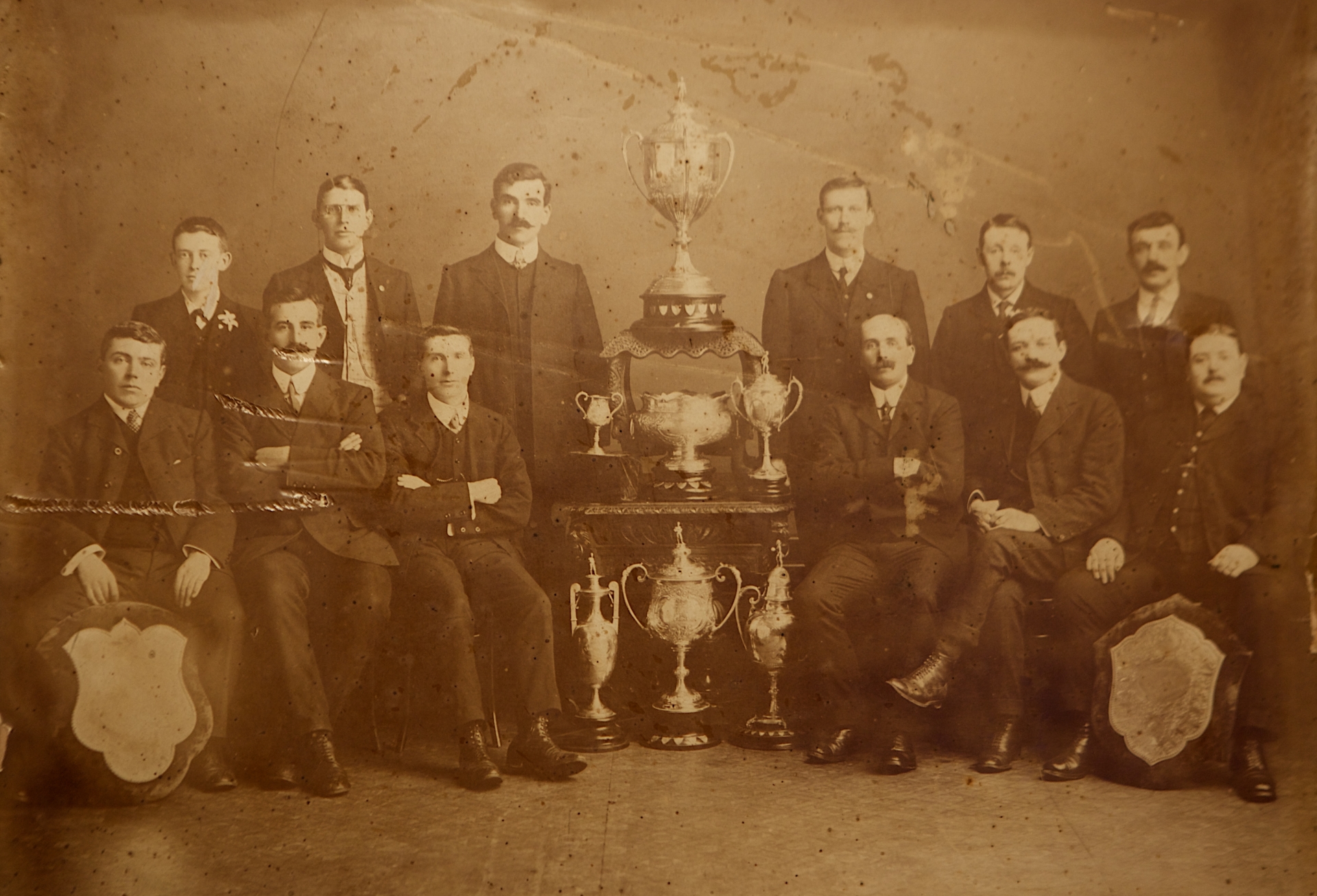 PICTURED: What is believed to be a photograph taken at the launch of the D&D 99 years ago which includes back row far right James "the Brad" O'Doherty, grandfather of former professional footballer and Derry City manager Tony O'Doherty. Unfortunatly we don't have all the names of the committee. If readers can identify any of those included in the photograph that would be great. Back row ?? O'Donnell, 3rd over ??? Boyle, ?? Andrews, ?? Mullholland, J. Doherty. Front row, ?? Hollins, P. Deeney, J. Bonner, ???, Wilton, ???.  (Photo - nwpresspics collection)

The longest running independent football league in Ireland, the D&D is now clinging on by its fingertips, and unless the committee can register enough teams to form a league by February 29, the association will cease to exist.
It is an unfortunate and sad reality according Chairman Jimbo Crossan.
“Over the years the D&D has provided players for the likes of Coleraine, Derry City, Institute and Finn Harps,” he said.
“Most of the young guys got their schooling in the D&D and I think it's an absolute shame that the footballing fraternity in Derry don't appreciate what the D&D has done for football over the years. It's 98 years now. We would love it if we had another two years at least, just to complete the 100 years. Unfortunately it doesn't seem to be in the future. There appears to be a lacklustre approach to junior football overall, which is a shame.”
There is no hiding the fact that the interest in playing D&D football has waned dramatically over the years, something Crossan acknowledges but does not understand.
“The D&D was started so that anybody and everybody could play football,” he explained. “There was no ban on anybody whether you were a senior or a junior or a believer or non believer. It was set up just to allow people to play football. I don't know where junior football is going at the minute but it's on a downward trend.
“The D&D is a summer league now and everything is in the players' favour because they have good weather and good pitches, but unfortunately the powers that be that run the teams see differently. I would be sad if the D&D had to pack up. If you look through the names of players who have gone on, it's an amazing achievement. To think that we have 98 years and that people couldn't make the effort for another two years, it's a shame.”

'Culture change'
For Secretary Willie Barrett, the writing has been on the wall over the past ten years.
“I think it changed maybe 10 or 12 years ago when shift work came about and the boys who were already playing on a Saturday no longer wanted to play on the Sunday because they didn't want to play the two days. There was a wee drop then,” he said.
“It doesn't seem to be worthwhile because if they don't want to play there's no point making fixtures or no point in putting in ther work. The move to the summer league didn't work out because then the players were saying that they couldn't play at night. It was lovely weather at times, and they thought it was great at the start. We started out with 13 or 14 teams, then the next year we had 8 or 9 then last year it got worse. It was soul destroying to try and organise it because nobody seemed interested.”
Whilst the committee hasn't fully given up hope of attracting teams for another season, Barrett believes that it is now just down to teams locally to support the association, if only for two more years.
He explained: “This will be the 99th season, so if we don't get the numbers this year, then maybe next year we could put on a summer cup to mark the 100th year, but the way it has been even if we did get the numbers for this year and we started out with eight teams, we would only end up with three or four come the end of the season because teams keep pulling out. It's terrible really. When you think of the reasons why it started, and the fact that we had to form our own organisation to run a competition, it's sad.”
One of the main driving forces behind the league, especially in recent years, is Match Secretary Liam Smyth, who many would say is the heartbeat of the D&D. For Smyth, the current situation is heartbreaking.
“I would be really, really sad to see it go because I have given it everything,” he said.
“It's been coming the last couple of years. We were struggling and we moved to summer football and everybody said it would be a great success. All the teams said it would suit them better because they could play midweek and that would avoid them playing on a Sunday morning after a Saturday night. It has turned out to be a complete disaster.
“For some it was great coming out on a summer's night and watching football, and there were some great matches, but there was a lot going on in the background that nobody knew about in terms of chopping and changing fixtures and working around others' schedules.
“It would be nice to get to the 100 years, but even if we did, I don't think there would be any way we could carry on afterwards because the interest is just not there. It's a different culture these days and the young people just don't want to know. I would personally like to go back to Sunday football with a 2:30pm kick off but I don't know how many teams would even be up for that. They can't play in midweek, they can't play on Sundays, so when can you play?”
Everyone has their own memories of the D&D, but for Smyth the legacy will last in the friendships he has made over the years.
“I have made some great friends in it and I have seen some fantastic matches over the years in the D&D, but that's the time they wanted to play,” he stated.
“I have seen some fantastic players. Whenever I took over James Coyle in 1992, we had 55 teams and I had less bother with 55 teams than I had with the six last year. I have put everything into the D&D and it's soul destroying to be honest and it will be a real shame to see it go.” 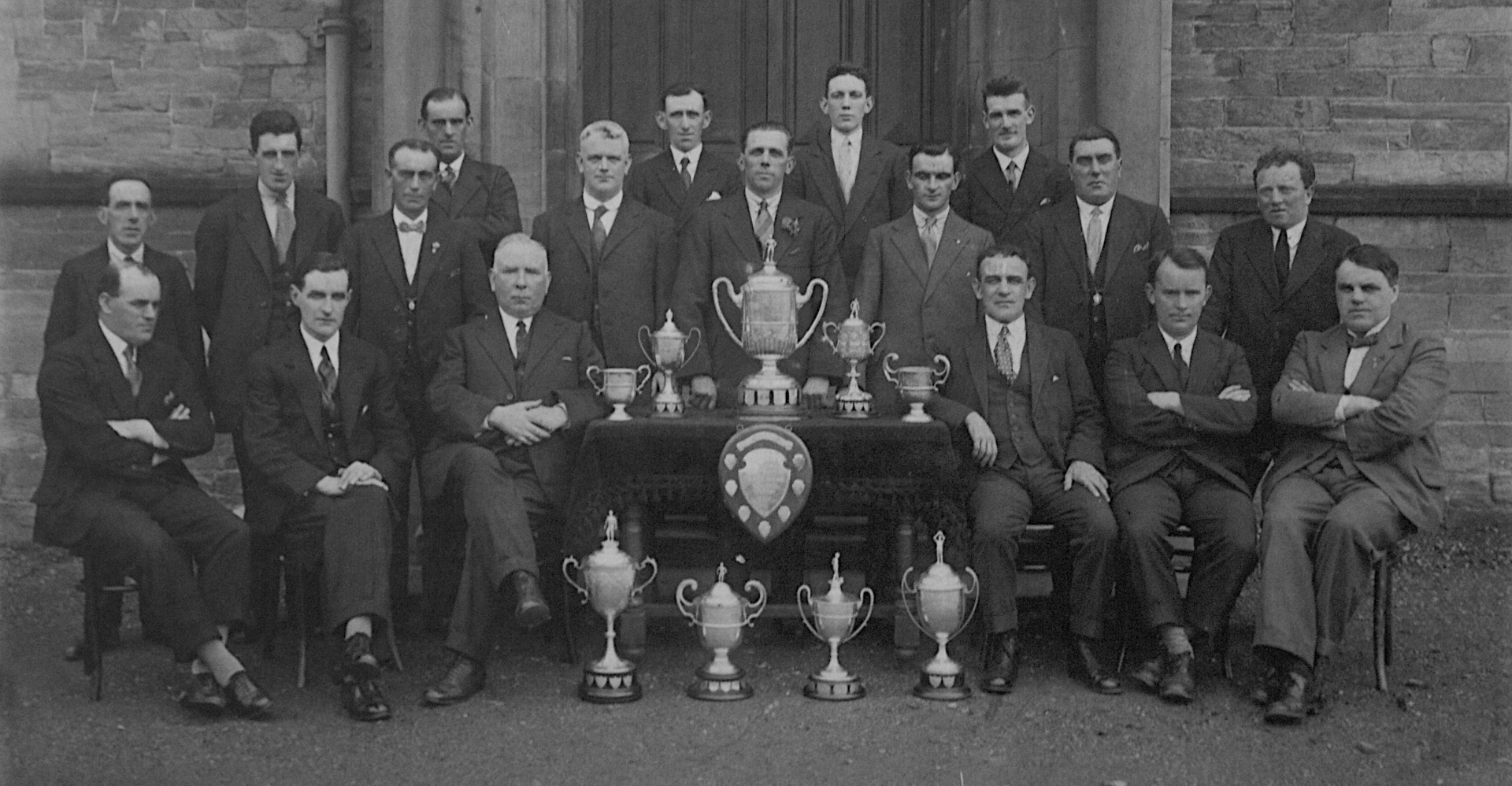