Coyle back in action in April as he eyes huge summer 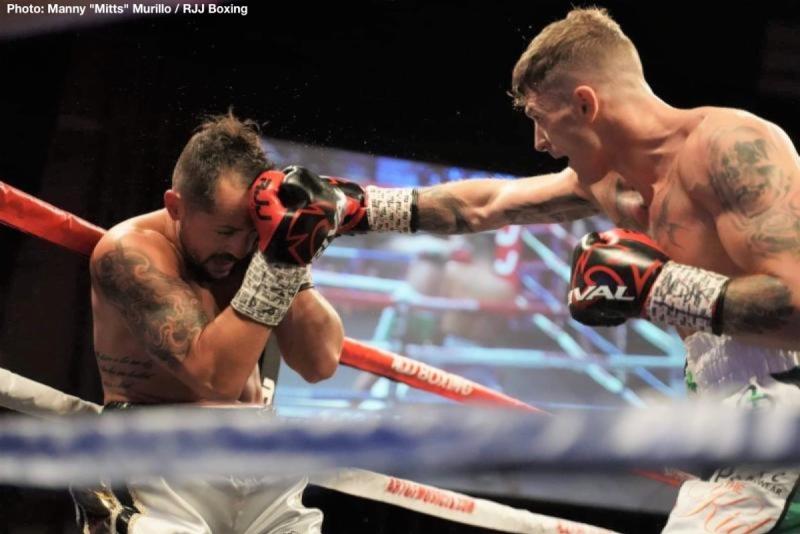 Connor Coyle will be back in action in less than two months' time.

Connor Coyle is eyeing a return to the ring as early as April after breezing through his latest professional fight against Miguel Dumas unscathed.
The Derry middleweight took his professional record to 12-0 with a first round stoppage last Thursday night on the Roy Jones Promotions, UFC Fight Pass card in Washington.
Coyle battered Dumas from the opening bell, landing hard-hitting shots with a combination to the head towards the end of the round. After the bell had sounded, and after consulting with the ringside physician, referee Joel Scobie stopped the bout. It was a quicker than expected victory for Coyle who wanted the contest to go beyond one round.
“I'm always glad to have another stoppage but I wish it had gone on longer,” he admitted. “He didn't come out for round two. He had to retire on the stool after the first round. My first round was just feeling him out, and working the jab and if anything follows up then just finish it, but I never got the opportunity for that. I never got the opportunity to show how well prepared I was. I came home unscathed and fresh with no injuries. I didn't even get hit once in the whole round so we're ready to go again.”
Dumas came into the fight with a decent reputation and even boasted twice as many knock outs as his opponent. But whilst his reputation preceded him, the reality turned out to be much different.
“To be honest I expected him to come straight at me after the first bell went but he went onto the back foot,” Coyle continued.
“My plan was to put him on the back foot and for him to come at me which would have suited me because he would have walked on to my shots.
“He took me by surprise by going on the back foot. Maybe he thought I was a lot bigger than he expected or maybe, when I threw the jab, he thought he had to do something different. He didn't hit me so I never felt any power. Anything he did throw my footwork was too fast and he didn't land a glove. As soon as he threw, I wasn't there. I was just in and out, in and out. He couldn't hit me.”

Another step
It may have been over much too soon for Coyle's liking, but regardless, it is another step in the right direction for the 29-year old, who is expecting big things in 2020.
“It's just part of the game,” he stated.
“It's another knock out on my record which is good for me. I put in over 100 rounds of sparring in the build up as well so it's not to say that I'm not getting the rounds. I put the hard graft in the gym so I have those rounds under my belt anyway. I'll take the TKO but I wanted to showcase everything I have been working on over the last three months.”
Coyle has no objections to getting back into the ring again so soon, and having stopped his last two opponents in double quick time, he is eager to get as much in-ring experience as possible.
“That's the next step. I would like to be back quickly. I want to get the rounds in. I've only had three rounds in nine months. In that case I would like to get a fight just for the rounds. It wasn't in the plans but if we get the go ahead we'll take it.
“The fight in the summer is going to be a massive step because I want to break into the top ten or top five in the world.”