No middle of the road for Derry

The destiny of City of Derry's season may well lie in the result of this weekend's game at Midleton. 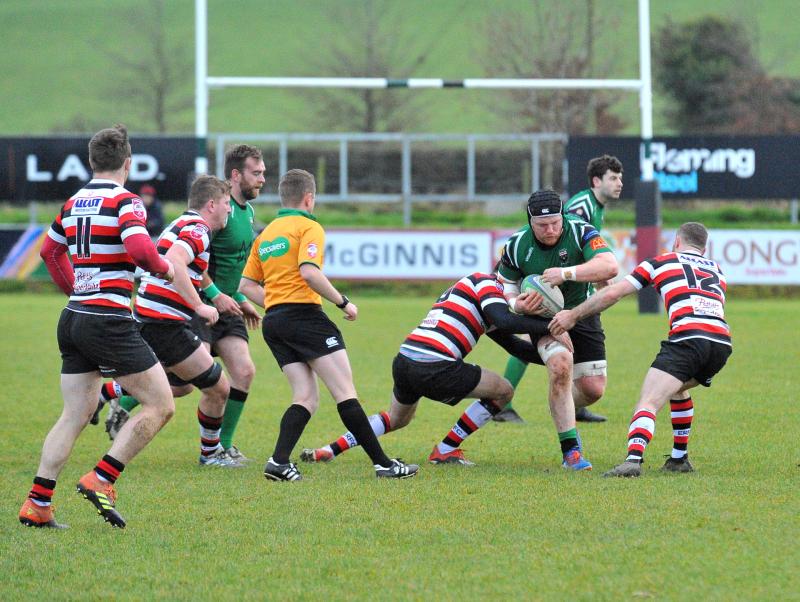 City of Derry are hoping for some breathing space over Christmas with a win at Midleton this weekend.

The destiny of City of Derry's season may well lie in the result of this weekend's game at Midleton.
Paul O'Kane's side find themselves in a precarious position ahead of the game following the home defeat to Enniscorthy last Saturday, a day when very little went right for the hosts.
As a result of that defeat, the AIL Division 2C league table does not make good reading for City of Derry, who are in ninth position. But with play-off hopes still very much an ambition this season, there is a positive ion the fact that the league positions are so condensed this year. Despite that defeat, there are still only four places between ninth place and third place, which is currently occupied by Omagh and victory over Midleton this week could leave Derry in a much healthier position leading into the Christmas break.
That much is certain, but what isn't certain is what kind of performance City of Derry will produce, with the nature of the defeat to Enniscorthy surprising after their morale-boosting win at Bangor a week earlier.
Decision making and ball possession were key issues where Derry let themselves down and coach Richard McCarter is hoping that lessons can be learned from the most recent defeat.
“For a large part of the game we weren't at the races and then two intercepts at the end made it look worse,” he admitted.
“It's all really congested this year. It's tight so we just have to play well in these games and if you play well you have a good chance. It depends how clinical you are as well and against Enniscorthy we didn't do either so that's what happens.”
McCarter and O'Kane had targeted three wins ahead of the Christmas break and whilst they got off to the perfect start at Bangor, those plans were ended by last Saturday's display which saw Derry fall behind early on and never recover.
“We thought we could win that game and we thought we could win all three, especially because it was at home,” he continued.
“Even at the end we thought we could have gotten something out of the game and that's why we were chasing, but we'll move onto the next game. It puts a bit of pressure on us now because it is a must win but again it's one if we play well, then we will win but if we don't, we won't.”
This week's opponents Midleton sit bottom of the league table and a win for them would take them right back into the mix with seven other teams in the division. That is the incentive for the hosts this weekend, but McCarter is determined that City of Derry ficus on their own jobs and finish a mixed year on a high to give the,m plenty of reason to be optimistic heading into 2020.
“We want to be in the top half of the picture,” he stated.
“It just sets the tone over Christmas because if you win it it just leaves everybody feeling really positive looking into the New Year and if we don't then it will have the opposite effect obviously. We haven't turned into a bad team overnight and we'll certainly be going down there this weekend hoping to show that.