"The boys just don't give up" - McNamee

Barry McNamee admits it would be a ‘huge achievement’ if Derry City were to bring European football back to the Brandywell next season. 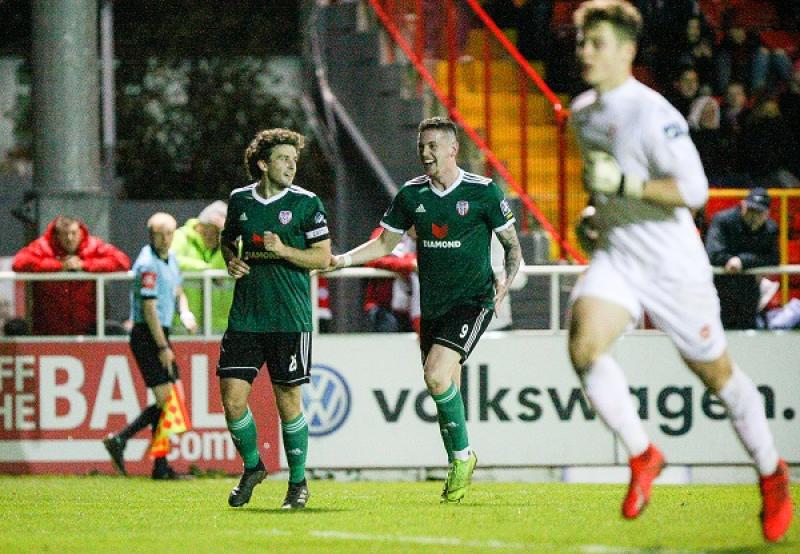 THANKS VERY MUCH... David Parkhouse rushes to congratulate Barry McNamee after his instinctive finish put Derry City into the lead against Sligo Rovers.

Barry McNamee admits it would be a ‘huge achievement’ if Derry City were to bring European football back to the Brandywell next season.
The Derry City captain scored the winning goal against Sligo Rovers on Saturday night to pout his team on the verge of a remarkable turnaround in fortunes for a team which finished in eighth place in the Premier Division last year.
A solitary point against St. Patrick’s Athletic at the Brandywell tomorrow night would seal the deal for Derry City and McNamee admitted that all focus is now on getting the job done.
“We were watching the results on Friday night and saw that Pat’s slipped up a wee bit so and we spoke about that before the game because it was a good chance to put a gap between us,” he stated.
“We need just one point now from the last two games so we’ll just focus on ourselves because we have a big game on Tuesday night again so it’s about getting ourselves right in the next two days. It’s a quick turnaround but we’ll be ready for it.”
McNamee scored only his second goal of the season at Sligo to win Saturday night’s game after goalkeeper Ed McGinty hit it straight at the City captain as he attempted to clear it.
For McNamee, it was just about being in the right place at the right time.
“The ball was played back to the keeper and I went to put a wee bit of pressure on him but you don’t really expect anything to happen but he more or less kicked it straight at me and I just put the foot out and guided it in,” he explained.
“People think I didn’t mean it but I don’t care. The team is going to come before how many goals I get.
“This was a big goal which puts us a wee bit closer but whether it’s me or not it doesn’t really “
We had a very sloppy start and again another slack goal was given away but credit to the boys again, all season there have been obstacles thrown at us and we’ve always answered. It was a big win and as Decky says, you don’t win too many games down here.”
The Candy Stripes can still secure third place with home victories over St. Pat’s and Finn Harps this week with Declan Devine emphatic that his players give everything in these last two games, there should be plenty of entertainment at the Brandywell over the next few days.
“Our aim is to win the last two games,” McNamee continued.
“If Bohs win their last game it will go down to goal difference but we’re aiming for third place.
“At the end of the day fourth place gets Europe so we have got to nail that down on Tuesday night and if we win that and beat Harps hopefully we’ll get third place as well. Obviously our objective is to finish third but next season if we’re playing in Europe no-one will care if you finish third or fourth.
“The boys in there just don’t give up. You saw tonight again when we went behind we came back. Over the years at Derry whenever you went behind it wasn’t too often you came back again.
“There’s a great character in the group and a never say die attitude and that’s all you can ask for.”