Third place the target for Devine

Declan Devine will not accept that the job is done for his team, who need just one point from their final two home games to secure Europa League football next season. 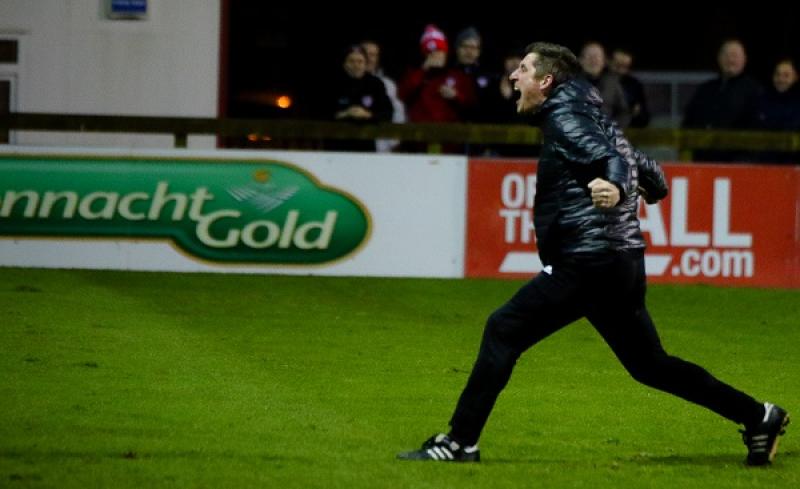 Declan Devine will not accept that the job is done for his team, who need just one point from their final two home games to secure Europa League football next season.
Whilst the fans left Sligo singing after a comeback victory, Devine was already focusing on tomorrow night’s game against St. Patrick’s Athletic which could see the Candy Stripes seal the deal mathematically.
Devine wants more than one point and European football however.
“We want to win two games and finish third. That has to be the target,” he insisted.
“There are six points up for grabs; Bohemians are three ahead of us but I think we are two goals ahead of them now. We want to try and make six points up if we can but we know that’s extremely difficult but we’re at home and our home form has been good.
“We are playing a team that is competing for Europe on Tuesday night and we need the fans, we need everyone in Derry to muster the effort and energy to come and support us because it would be brilliant and it could be a really good occasion. This is going to go to the last game no matter what and if we want to finish third or if we want to qualify for Europe then we have two games to win.

City’s winning goal was unusual to say the least but for Devine it was a case of his team making their own luck.
“I think it started with our aggressive press,” he said. “It started with David Parkhouse pushing really hard to get down the line. Obviously it was a bit of fortune for us but Barry had to be in there, he had to be chasing the ball down.
“It was a bit of fortune but over the course of the year we haven’t carried a lot of luck. We have been on the receiving end of some bad luck so we’ll take a win by any means tonight. It’s the first time as manager that I’ve won in Sligo so it’s a big win for me.”
Devine and his players celebrated enthusiastically in front of the City fans at the final whistle and the manager admitted that the bond between both parties has been a key element of success this year.
“It’s all about the fans,” he said.
“You see the players’ response to the players and the players’ response to the fans. There’s a real feel about the club at the minute. People are spending money on a Saturday to come down here and we’re very grateful for that.
“We’re very grateful of the crowds we’ve had in the Brandywell this year, we’re very grateful that when we’re 1-0 down after 12 minutes the fans aren’t turning on us and they keep encouraging us and keep singing.
“It’s all about the fans, it’s all about getting this club back to where I believe it can go.
“There will be nobody happier to see us land in Europe this year but there’s still a lot of work to be done.”