Harps prove too strong for Strangford 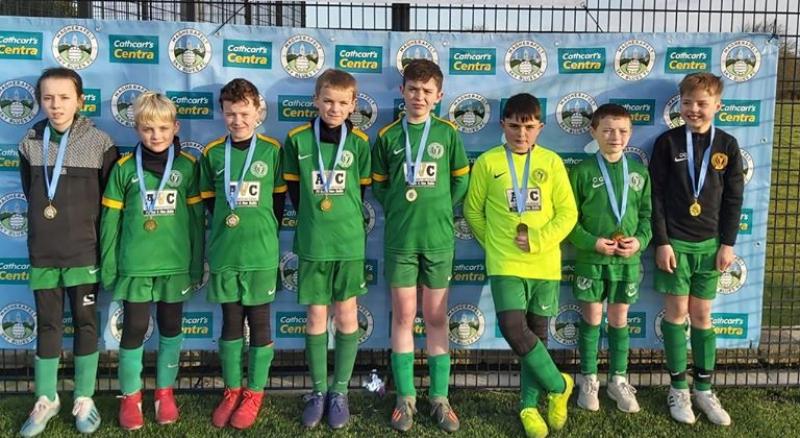 Foyle Harps 2010s who took part in a tournament hosted by Magherafelt Sky Blues at the weekend.

A double from the impressive Caolan O’Donnell was enough to see Foyle Harps safely through to the Quarter Finals of the NIBFA Plate at Limavady on Saturday.
It was a comfortable win for Eamon Donnelly’s boys and in truth they could have won by a bigger margin if not for the heroics of young Ciaran Sharvin in the Strangford goal.
Harps started the game brightly with the wind at their backs pressing for the opening goal. The elements had a big impact on this game and Jack Mc Laughlin would have scored directly from a corner but for a fine headed clearance by Strangford’s Cole Mc Gouron.
Harps continued on the front foot and Glenn Mc Court split the Strangford defence with a clever pass that found Oran Carlin cutting in from the right but the lively Kiefer Mc Cusker just failed to get a touch to Carlin’s brilliant cross as it flashed across the Strangford goal.
Harps continued to press and the opening goal came after some good work by Oisin O’Donnell who played a sublime pass into the path of the onrushing Caolan O’Donnell. O’Donnell did well to hold off his marker and arrow his shot into the bottom right hand corner of the goal to put Harps 1-0 up.

Powerful
Mc Cusker almost added a second minutes later but his powerful strike from the edge of the box was deflected over by Strangford defender, Odhran McKenna.
Harps kept this lead until the interval and came out in the second half to try and put the game beyond Strangford’s reach. Luke and Glenn Mc Court were beginning to take control of the midfield and it was Luke’s chipped pass that sent Jack Fleming in on goal. His first time shot could only be parried by Sharvin but that man Caolan O’ Donnell was on hand once again to sweep the ball into the Strangford net to put Harps two in front. Minutes later Fleming thought he had added a third when he slid home Noah Leonard’s cross only for the referee to chalk it off for offside.
Strangford continued to work hard and seek a way back into the tie but thanks to the outstanding defending of Ollie Deery and Shay Campbell they rarely threatened John Campbell in the Harp’s goal.
The closest they came was when the impressive Cillian Swail fired just over the bar. The boys in green finished well on top and and broke through the Strangford rearguard time after time. Leonard and Luke Mc Court both seeing fine strikes brilliantly saved by Sharvin.
In the end Harps were happy to settle for the two goal victory to seal their place in the Quarter Finals.