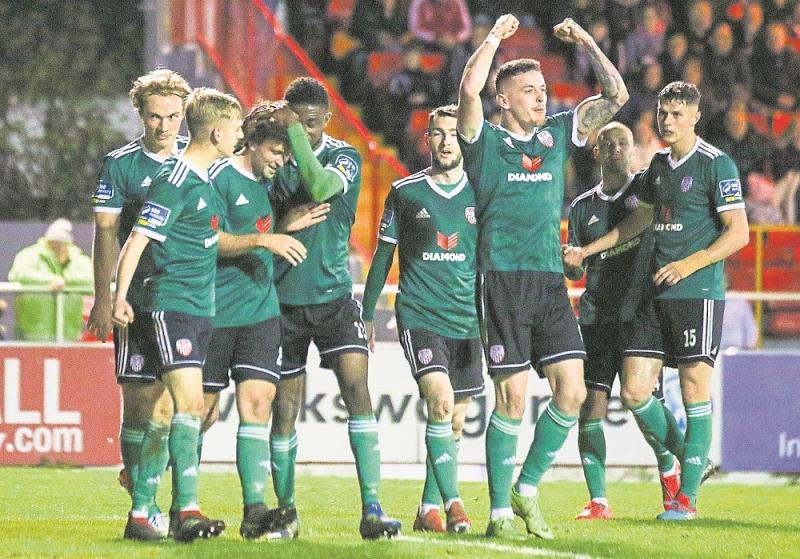 AWAY DAY JOY... Derry City have won 20 games on the road under Declan Devine.

A Derry City's away record under Declan Devine stands at 20 wins in 49 games, with 73 goals scored.

B Several teams have drawn a blank against Derry City when Devine has been in charge, with the Candy Stripes notching up 44 clean sheets in all competitions.

D There have been 15 red cards produced to Derry City in Devine's time as manager. Only three of those came last season.

E Devine has led Derry City to European qualification in his three seasons in change at the Brandywell.

F Who could ever forget the FAI cup final of 2012, when Devine led his team to a dramatic and emotional victory over St. Patrick's Athletic, winning 3-2 after extra time?

G Devine's first role at the club was as a goalkeeper, but since then he has appeared in several roles, including Ladies team manager, senior team assistant manager and now manager.

I When not training at the new Brandywell, Derry City have an indoor training facility on the Buncrana Road.

J Junior Ogedi-Uzokwe was arguably Devine's best ever signing, coming on loan from Colchester United and ending up with the Golden Boot award as the League of Ireland's top scorer in 2019.

K Devine has learned a lot from Stephen Kenny over the years, as his assistant manager at Derry City and Dunfermline.

L Devine's first game in charge as manager came in the Setanta Cup against Lisburn Distillery back in 2012. City won that first leg 4-0 with Rory Patterson grabbing a hat trick on his debut.

M Devine's biggest win as City boss is a 7-1 victory over Mervue United in the FAI Cup in 2012, the night when Mark Farren broke Liam Coyle's goal-scoring record.

N Tim Nilsen is the first Norwegian to play for Derry City.

O Devine is the last Derry City manager to win at Oriel Park, back in April 2013.

Q This season, Derry City will return to the Europa League Qualifying Rounds after finishing fourth in Devine's first season since 2013.

R No Derry City player has scored more goals for Declan Devine than Rory Patterson with 38 in all competitions.

S Devine was the only City manager to reach the Setanta Cup final, back in May 2012. Derry City lost on penalties after a 2-2 draw.

T Devine's led Derry into Europe in 2013 and came up against Turkish giants Trabzonspor. City memorably came back from 2-0 doawn in Turkey to go level at 2-2, before going on to lose 4-2 in the first leg and 7-2 overall.

U Massive non-league underdogs Bluebell Celtic caused an FAI Cup shock when they held Devine's Derry City to a 0-0 draw at the Brandywell in August 2013.

V There's nothing quite like an emphatic derby day victory and Devine has enjoyed more than most, defeating Finn Harps 4-0 on four separate occasions.

W Devine has won 60 of 131 games in charge of Derry City in all competitions.

X Declan Devine has been marked absent once for a game as manager – the FAI Cup tie at Blarney in June 2013.

Z Zayed, Speak, Farren, Patterson and Junior. In City's time in the League of Ireland, 5 players have finished as the league's top scorer. Devine has more Golden Boot winners as manager than any other Derry City boss.