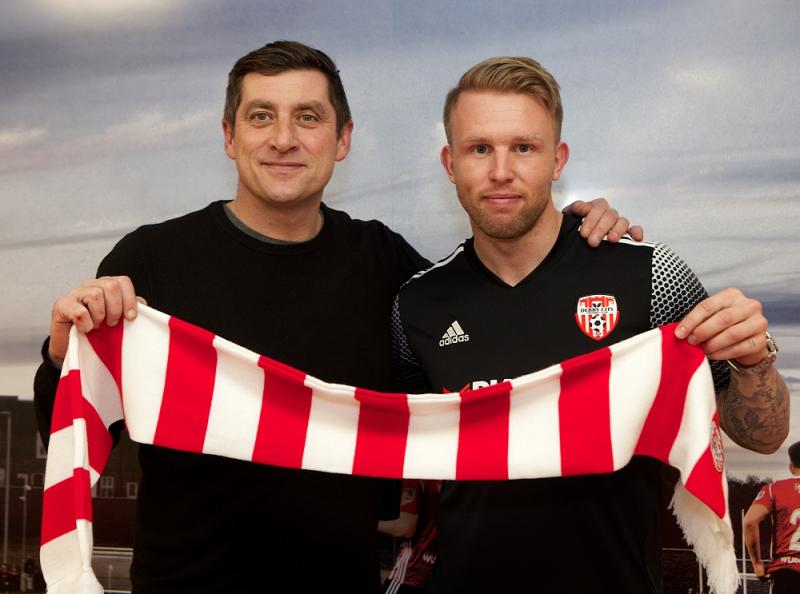 Norwegian striker Tim Nilsen is set to lead the line for Derry City this season, and he is hoping that he can make his mark in a new country and new league.
The former Fredrikstad striker is something of an enigma for City fans, but two goals against Finn Harps in pre-season opened people's eyes, whereas Declan Devine believes he has struck gold with the 27-year old.
“It's important that we replace the goals that we lost last year with Ogedi and Parkhouse,” he said. “We have to make sure we are competitive in the middle of the park and we have made changes in that area of the pitch. There is a lot of good happening at the minute and we want to make sure that we're ready for Friday night against Dundalk.
"Tim is a proven player, a proven number nine, that has played at a very high level and from our point of view as staff we think he'll only enhance the group moving forward. Centre-forwards are like hen's teeth at the minute, they are very difficult to get no matter what level you are at.
“There are absolutely none in Ireland that are at Tim's level.
"For us we had to make sure that we brought a number nine to the club that was a top level player and we are delighted today because we feel that we have done that by bringing in a top, top level player and I think moving forward Tim will be a fantastic signing for us.”

Eager
The player himself is eager to get going, beginning with Oriel Park tomorrow night.
“This is a big step for me and hopefully I can restart my career here and of course bring Derry City
as high as possible with some goals,” he said. “I am all about the box kind of player. Of course I am an all around player but I love to be in the 18-yard box and that's where the goals are scored so I am going to be there all the time and hopefully I can score a lot of goals.
“Of course every footballer wants to play as high as possible. The first step now will be to take Derry City as high as possible. I have met everyone now and I am looking forward to the first game. It starts at the top against Dundalk and if we are going to end up top three then we have to win those games.”