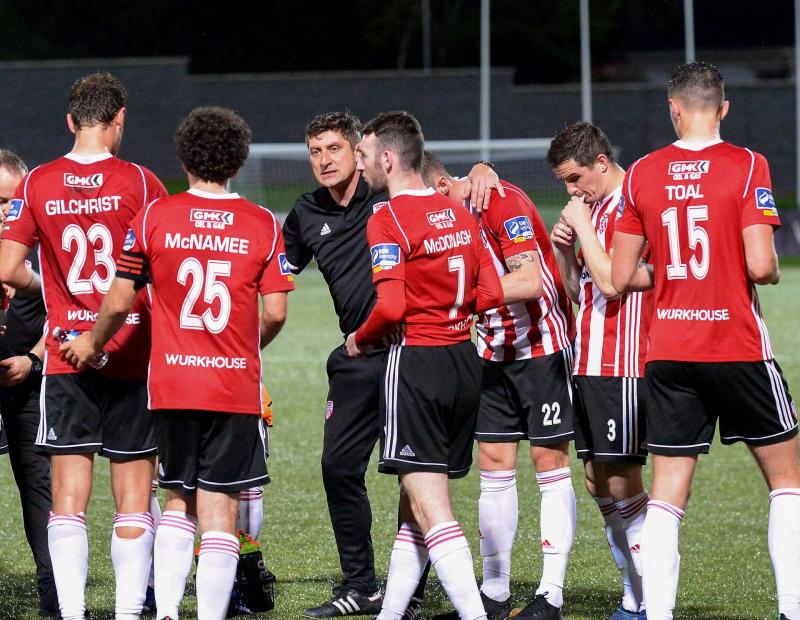 Declan Devine will lead his new look team into Oriel Park tomorrow night for his 100th league game in charge of Derry City, but there is only one number that really matters for the manager.
Numbers will be flying about ahead of kick-off tomorrow night:

The fact that City failed to defeat Dundalk last year still clearly weighs on Devine. No team matched the champions like Derry did last year, but for the agony of the defeats in the FAI Cup and EA Sports League Cup final, and the pulsating league games home and away, victory eluded the Candy Stripes.
There is no such thing as a moral victory for Devine.
That is just one factor driving him on as another new season arrives. The City boss was furious with his team's performance against Institute in the recent Billy Kee Memorial Cup game. His standards are high. No one should doubt it. And Dundalk cannot come quickly enough.
“I can't wait,” he said. “It's been five tough weeks for the players and also the staff because we've been in and we've done a lot of hours and we've clocked up a lot of minutes in terms of the effort and getting people fit and getting them ready for the games.
“The excitement has been building. We're just back from Dublin where we had a fantastic few days in preparing for the start of the season so it can't come quickly enough to be honest.
“We have a completely new squad again, nine new players in at this moment in time and to be fair the group has really evolved over the last couple of weeks.
“They are forming friendships and togetherness that hopefully will stand us in good stead over the course of the season.”

New faces
As usual with Derry City, there have been significant changes over the past few months – key players such as Greg Sloggett, David Parkhouse and Junior Ogedi-Uzokwe all leaving, a total of nine new players coming in.
“It's a mixed bag because we have people in who are going to give us a lot more experience, and we have people coming in who are going to experience Premier League football for the first time,” Devine acknowledged. “We have the likes of Mallon and Moussa who are coming in and who are completely new to the League of Ireland, Tim is also new so it's important that we hit the ground running and we'll be showing the guys lots of stuff this week in terms of what the league is about and how we should go about our jobs.
“Ultimately it's a new group and we have got to make sure first and foremost that we're extremely hard to beat and then leave everything on the pitch like we did last year and make sure that when we come off the pitch after 90 minutes that we don't have one regret in our heads.”

Two captains
With Barry McNamee leaving the club to join Finn Harps, Devine has had to think about his new captain. He has not been rushed and only last week announced that there will be two captains at the club this season – one off the pitch and one on it.
“We have a club captain in Mark McChrystal,” he explained.
“Mark is a player I've known for a long time and he's going to oversee the whole club as captain of the club. He is working with the Ulster Senior League team as a coach and working with the U13s in the Academy as a coach and I think he's a brilliant influence to have around the changing room so Mark is the Derry City club captain this year, but the main man on the pitch this year will be Conor McCormack.
“He is a guy who has unbelievable experience, he has won league and cup doubles, he's a brilliant leader on the pitch and his application since the day and hour he came into this club has been second to none. His statistics in his running and in his drive and determination to bring people with him has been fantastic over pre-season.
“When we went to speak to Conor McCormack he had financially better offers to go elsewhere in the Irish League and the League of Ireland but he really wanted to come and play for Derry City and that on its own is something that really appeals to me.
“If the general public seen what myself and the coaching staff have seen from Conor McCormack since the day he came in, it was a no brainer. Then we have Ciaron Harkin as vice-captain again this year. We have terrific leadership, we're delighted with Conor and we think that he will be a brilliant addition this year.”
One key factor in the success of last season was consistently seeing the Brandywell filled, as City fans rediscovered their passion for the club – the efforts on the pitch motivating the fans to an extent that there were several memorable nights at the famous ground throughout 2019. That was huge for Devine and his players.
“The best thing that is going on here is the relationship between the playing and coaching staff and our supporters,” he agreed.
“I look around at our supporters and I'm seeing that season tickets are going great, people are in the street wearing Derry City merchandise again. I'm seeing so many young people wanting to come to the Brandywell and that's our future.
“Our young people are our future and if we can continue to build on the product on the pitch and on the relationship between the players and the staff and the fans, where we are all working and pulling in the one direction, irrelevant of what the result is, if we can continue to build this football club then we'll leave a brilliant platform for the next people that come in.
“This is about the club, it's all about making sure that Brandywell remains full for the foreseeable future and the next generation of people coming around have heroes like Conor McCormack, like Ciaron Harkin, like Ciaran Coll, like Tim Nilsen, like Walter Figueira. We have got to leave these memories with these young people so that Derry City becomes a huge influence in their life.”

Targets
Devine has achieved a lot in his two spells as City boss, never failing to qualify for Europe and reaching three cup finals so far. He is hoping to improve those numbers this year, and significantly so.
“My target this year is to finish higher in the league and it's always been to win two cups, it's always been top qualify for Europe and it's always been to keep the Brandywell full,” he said. “Whether we achieve all those targets remains to be seen, but when you set out at the start of the year you want to improve, you want to get better, you want to win a cup competition and you want to qualify for Europe.
“I also want to get through a round in Europe, but that depends on the luck of the draw. The last two times I've been here n- the first time they got Trabzonspor and it was always going to be very, very difficult to beat them.
“The second time when I left we got Aberystwyth and that worked out relatively comfortably for the club. It all depends on the luck of the draw. That's what I want as a manager; this is not the common goal of the whole staff or the whole playing staff but I want these goals and if we did that then we can look back on it as a great season.”