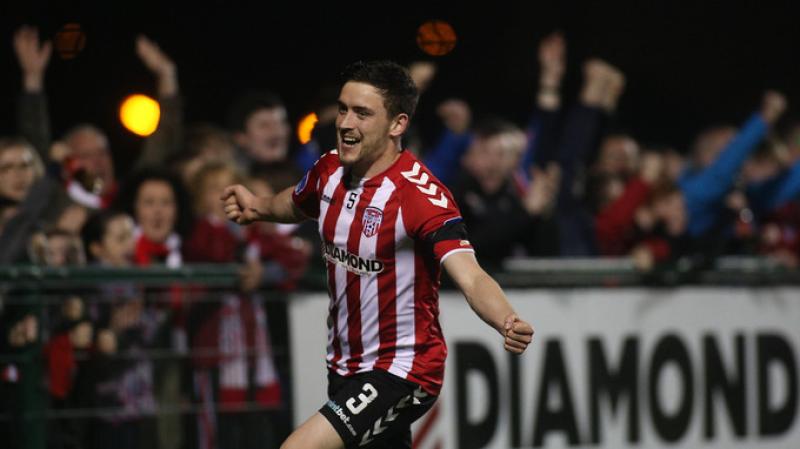 Dean Jarvis is considering a return to Derry City

Dean Jarvis has met with Derry City to discuss a potential return to the Brandywell but the defender has admitted that his home town team is just one of a number of options available to him.
Jarvis ended a two-year spell at Dundalk at the weekend, a successful spell which saw him win two league titles, one FAI Cup, an EA Sports Cup, the President’s Cup and the inaugural Unite the Union Champions Cup.
Jarvis is now on the look out for another club, with Larne rumoured to be interested in bringing the full back to the Irish League.
Jarvis, who has publicly thanked the Dundalk fans for their support during his two years at Oriel Park, admitted that his desire to be closer to his family is one of the main factors in deciding his next move.
“I have been chatting to a few teams,” he admitted. “I'm 27 with a young family so I want to move closer to home.
“Living away from my family and travelling up and down to Dundalk was hard. I have to take all that into consideration.
“I've chatted to Paddy McCourt but nothing has been finalised. I have had deeper discussions with other teams and Derry are still in the pack.
“ I remember at the start of last year Decky (Devine) got in contact with me. I was in his plans then. Tiernan (Lynch) at Larne was the same last year as well, and even before I signed with Dundalk, but it all still has to be decided.”
Still only 27, Jarvis has won more than many players manage in a career, but he is still hungry for more success, and his continued ambition is something which must be matched by his next club.
“One of the main reasons I left Derry was because I thought I had a better chance of winning stuff,” he admitted.
“I went down there and I couldn't ask for any more because I've won everything available in the past two years so it was a good decision from that point of view.
“The whole standard of the group and individually was high.
“Everyone was always trying to push on knowing that we were trying to win the league at the start of each year. We wanted to win everything.
“Last year we started out looking to win the treble and we were a penalty shoot-out away from that.
“Wherever I go next I'll be looking for the same standard. It might not be the heights of Dundalk because the last two years it has been unbelievable but wherever I go I'll be pushing to do the same and hopefully using my experience to help the group.”
First team football
Jarvis admits he is in no hurry to make his mind up, but first team football, something he constantly battled for at Dundalk, is another key factor whichever team he chooses.
“The end of last season didn't go as planned,” he stated.
“At the start of the season I was in the team and playing well and hoping to kick on - wherever I go I want to be playing every week, and do my best to start every week and that's not going to change.”