Missed opportunity for 'Stute as they draw yet again 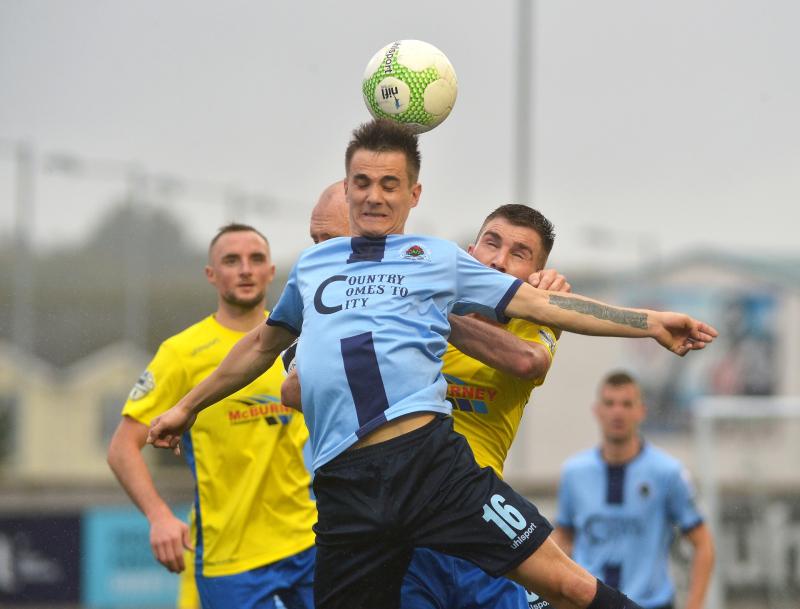 Institute drew with Ballymena United at the weekend and they are in action again this evening as they travel to face Glenavon.

Institute will hope to be more clinical when they face Glenavon this evening after missing out on all three points at Ballymena United at the weekend.
Sean Connor's side are still waiting to add to their solitary win at Warrenpoint this season, and they could well have had it at the Showgrounds as they bossed the first half, but only had one goal to show for it – yet another Joe McCready goal from the penalty spot. Their inability to add to that total, despite having several chances to do so, ultimately cost them as Ballymena hit back early in the second half and that was how it stayed until the end.
Whilst the home fans certainly didn't appreciate the result or performance, there was much more positivity for the visitors and it just seems a matter of time before they finally pick up that second win.
'Stute made two changes to their team which loss to champions Linfield last week, with Shane McNamee and Evan Tweed replacing Jack Bradley, who dropped to the bench and the
suspended Ryan Morrow, who was red-carded against the Blues.
The game was slow to get going with chances at a minimum early on, although United skipper Jim Ervin tried his luck on 14 minutes, but his long range strike was well gathered by 'Stute keeper Brown.
Institute went close themselves minutes later as Joe McCready's 25 yard free-kick was turned around the post by a diving Ross Glendinning, who would prove to be a thorn in the side of the visitors throughout the afternoon.
From Tweed's resulting right wing corner there was a goalmouth scramble and 'Stute thought they had scored but centre-back Conor Tourish saw his header cleared off the line by Andrew Burns.
Encouraged by that, 'Stute continued to attack and they were awarded a penalty on 29 minutes when Ervin fouled Gareth Brown inside the box. Referee Evan Boyce had no hesitation pointing to the spot and McCready, not for the first time this season, slotted home the resulting spot-kick, rolling the ball into Glendinning's bottom right hand corner.
From there, 'Stute took control and Glendinning had to make a top draw save five minutes before the break, as Colm McLaughlin's well hit drive was superbly pushed away for a corner by the United keeper.
Crucially though, 'Stute could not add to the goal and they went into the break only one goal ahead.

Half time 0-1
The lead was short-lived in the second half as United were gifted a way back into the game on 50 minutes after a goalkeeping error by Brown.
Graham Crown miss controlled inside the box and the loose ball was fumbled by the 'Stute net-minder into Lecky's path inside the six yard box and just as the striker was about to put the ball into the empty net, he was upended by Brown.
Referee Boyce rightfully pointed to the spot and Andrew McGrory made no mistake from 12 yards, drilling the ball straight down the middle of the goal.
'Stute had a strong claim for a penalty themselves moments later as Brown broke the offside trap, before he looked to have been brought down inside the box by Jonathan Addis, but the referee waved play-on, much to 'Stute's disbelief.
Just before the hour mark Rory Brown made up for his error, when a full stretch he did well to kept out Lecky's powerful header.
The game was there for the taking and it was almost 'Stute who struck a late winner when a fantastic passing move by the visitors on 81 minutes ended with McCready's clever pass releasing Tourish, but the defender's angled drive from the right hand edge of the box flashed just over the bar.
Moments later McCready was inches away from scoring a stunning second goal, as his 20 yard strike was tipped over by a fully stretched Glendinning.
'Stute were looking the more likely but it was Ballymena who came so close to snatching it as the woodwork saved 'Stute on 88 minutes when Ross Lavery's left wing cross found McGinty and his fantastic left foot volley from 12 yards rattled the crossbar.
The result leaves 'Stute three points ahead of Warrenpoint having played a game less.