All eyes on Midleton for defeated City of Derry

Christmas is traditionally a time of giving, but City of Derry were perhaps too generous as they fell to league leaders Enniscorthy 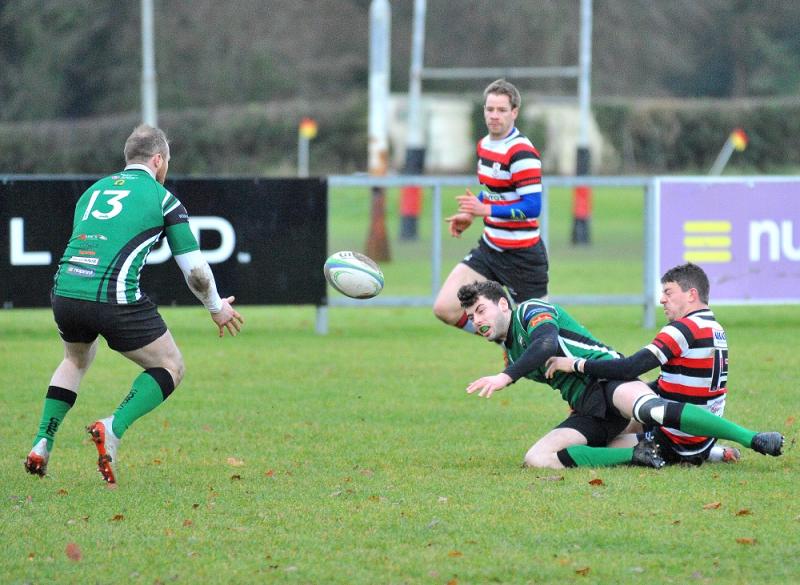 Christmas is traditionally a time of giving, but City of Derry were perhaps too generous as they fell to a heavy defeat to league leaders Enniscorthy that left the final scoreline looking very harsh on the home side.
Two misplaced passes in added time at the end of the game gave Enniscorthy 12 of the easiest points they will score this season, a disappointing end to a game that was indicative of the frustration City of Derry felt time and time again throughout the 80 minutes.
That the Enniscorthy victory was deserved was not in doubt, but there was just a glimmer of hope for Derry towards the end as they chased a losing bonus point, which could in a way excuse the two hurried passes which led to those late scores for Ben Kidd and Arthur Dunne.
The defeat leaves Derry second bottom in ninth but with just four points separating third place and ninth, one positive result could change the picture yet again, and that will be the aim this week, with a trip to Midleton giving Paul O'Kane's side one more opportunity to set themselves up nicely for the New Year.

Gifted
After the satisfaction of the Bangor win last week, Derry came into this one with momentum but within three minutes they had gifted the league leaders the opening score. It came from a poor line-out which saw Derry lose possession and Enniscorthy broke quickly with second row Tomas Stamp scoring and Ivan Poole converting for the first of seven tries.
Enniscorthy, with just one defeat in seven games ahead of this one, had the lead they wanted and they picked their moments again and again to frustrate Derrry.
The home side looked short on ideas against a disciplined defence with brief forays by the energetic Simon Logue giving glimmers of hope, but the final pass did not live up to the build up.
Enniscorthy were devastatingly efficient and when prop Sam Duffy was yellow-carded on 21 minutes the visitors wasted no time in striking again, a line-out ending with quick passing which opened Derry up for Ivan Jacob to score right under the posts. An easy conversion for Poole made it 14-0.
A frustrating first half ended on a positive note for Derry with Alex McDonnell converting a penalty to get the hosts on the scoreboard, but a big effort was needed second half if this was going to go anywhere for O'Kane's side.

Half Time 3-14
The next score was crucial in this one and Derry began the second period positively, but within ten minutes the comeback looked beyond them as Enniscorthy, so clinical, hit two more scores. Davy Murphy hit the visitors' third try to put daylight between the teams and after another yellow card, this time to Derry's Dara Gill, Poole scored and converted to make the score a daunting 26-3 with just 55 minutes played.
This Derry team are not known for giving in however and to their credit they responded well to score their first try. David Ferguson was the driving force behind the period of pressure which eventually led to the score, with McDonell eventually picking his way through the Enniscorthy line to score a try which he also converted.
Any hope of a comeback was killed inside four minutes however when David O'Dwyer replied for Enniscorthy to make it 10-31.

Kept coming
At this stage the win was Enniscorthy's but Derry still kept coming. A yellow card for Enniscorthy's Paddy Waters offered a glimmer of a hope of a losing bonus point and when Callum O'Hagan scored to take the game to 31-17, it became a real possibility.
One more score would have given Derry that point but in the dying seconds of the game, two misplaced passes gave Kidd and Dunne simple scores, to put an emphatic score on the result that Derry did not deserve.
All eyes now turn to the game at Midleton this week, with Derry desperate to get another away win to take the pressure off.
This defeat sees Derry drop two places to ninth in Division 2C but four points on the road this week could change the picture dramatically and see Derry enter the play-off places.
With Midleton also desperate for points to avoid become marooned at the foot of the table, it will be all to play for in the last game before the Christmas break.