City of Derry win away at long last

City Derry have moved up to seventh place in All-Ireland League Division 2C after a narrow one point success at Bangor at the weekend. 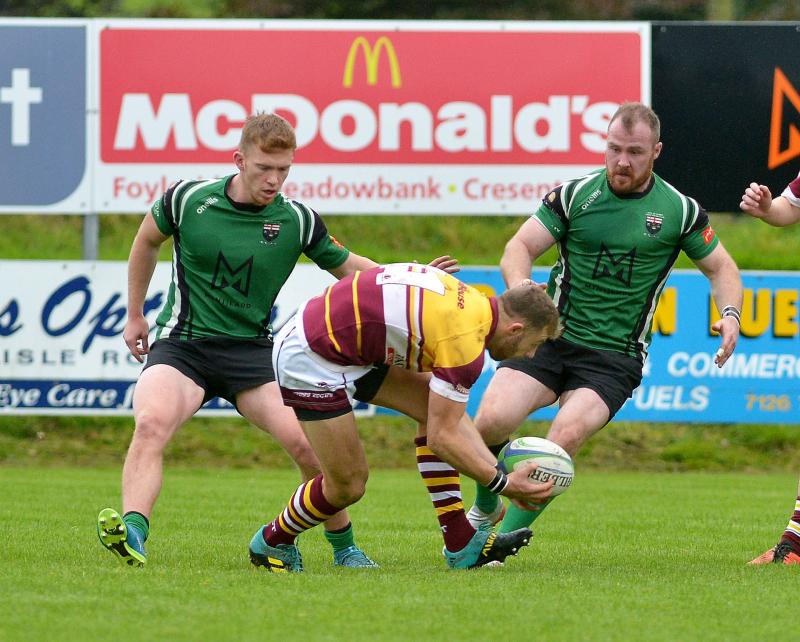 City of Derry go into this week's league game against league leaders Enniscorthy on a high after picking up their first away win of the season at Bangor.

City Derry have moved up to seventh place in All-Ireland League Division 2C after a narrow one point success at Bangor at the weekend.
Not only did the victory bring Paul O'Kane's team four valuable points, it also brought the club a very rare away win, their first of the season, which will be a huge boost heading into this week's league game against league leaders Enniscorthy at Judges Road.
It was far from an easy day at the office however as Derry made it hard for themselves throughout. Whilst they did come from behind to eventually win, they could well have made the game safe, even before half time, such was their dominance in possession, but their decision making when it mattered cost them several points and allowed Bangor to remain in the game right to the last. City of Derry were left grateful that Bangor missed what would have been a game winning penalty from 30m with just three minutes to go, but ultimately this was a deserved victory for the visitors who now have that poor away record off their backs.

Early score
Derry started well on Saturday and got their reward in the opening minutes as full-back David Graham touched down in the corner and with McDonnell converting, the visitors had a 7-0 lead.
Rather than build on that however, Derry found themselves on the back foot and they conceded within minutes as their lead quickly disappeared – second row Declan Horrix crashing over and with Rhys Larmour converting the game was tied at 7-7.
From a strong early lead, Derry then found themsleves chasing the game as Bangor built on that momentum to score a second try - Ally Lockhart feeding Jamie Clegg who released Mark Widdowson to score in the corner. Larmour again converted and Derry were chasing the game at 14-7.
The score stayed that way into half time, which was bizarre given the dominance of Derry for the majority of the half – the visitors dominated possession and territory but were guilty of too many unforced errors in the Bangor 22, with a missed penalty just before the break also not helping matters, the ball striking the post to keeping Bangor ahead.
Derry continued to apply pressure in the early stages of the second half and that eventually told as they finally got their second try – Stephen Corr scoring, but a missed conversion meant that they still trailed by two points.
A penalty by McDonnell minutes later put the visitors back into the lead however and with less than 20 minutes on the clock it was Derry's to lose. They continued to dominate but couldn't add to their tally and that could have cost them as they conceded a scorable penalty with three minutes left on the clock – Larmour stepped up to win the game but his effort was off target, much to the relief of the Derry players, who had done more than enough to win this game in the 77 minutes previous.