More away day disappointment for City of Derry

City of Derry continue to await their first away victory over the season as they were held at bay by Tullamore at the weekend. 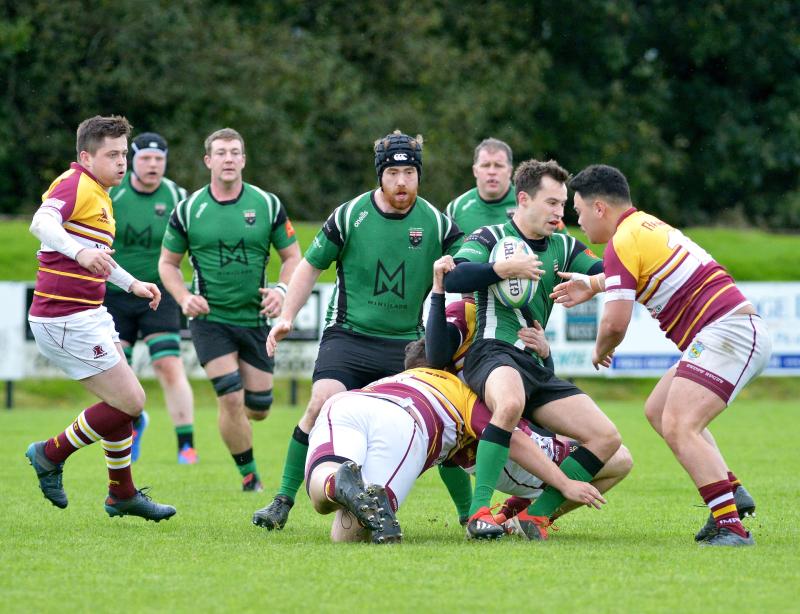 City of Derry fell to another defeat on the road.

City of Derry continue to await their first away victory over the season as they were held at bay by Tullamore at the weekend.
Derry travelled south confident following the impressive win against Clonmel the previous week, looking for that elusive away victory but they did so without a few key players such as Richie Baird, Stephen Corr, Denis Posternak and Simon Logue. And with Jack Sayers and Neil Burns also sidelined this was a real test of squad depth.
The game was played in very cold conditions, on a heavy surface free from wind and rain although the temperature was significant as a number of balls would be dropped throughout the day. The significance of this resulted in many scrums disrupting the flow of the game.
The game commenced with both sides happy to kick the ball away in an attempt to gain ground and isolate players. These early exchanges were testing and had both sides scrambling to get a foothold in the game.
The opening salvos of penalties being kicked were all from distance, leaving the score 6-3 and with McDonnell hitting the post after ten minutes.
The first try of the game came as a result of Derry attacking, misplacing the final pass which Tullamore gleefully turned into possession and territory. This passage of play got Tullamore into Derry’s 22 for the first time in the game. From a scrum right in the corner Tullamore quickly released number 12 Carillio who barged through and over the top of back row Tiernan Thornton. The conversion gave Tullamore a 13-3 lead much to the amazement of the home side.
Again as Derry pressed the penalty count was mounting and at the breakdown decisions were 50/50 as to which way they were going to go. Derry captain David Ferguson was clearly on the ball and in possession when he was pulled off his feet at which point the referee awarded Tullamore a penalty. The score was suddenly 16-3 and the game was starting to get away from Derry.
However Derr,y through the likes of Thomas Cole and Davy Graham, showed their electric pace that can make something out of nothing. Unfortunately the crowd were not privy often enough of Davy and Thomas in full flight.
It took a moment of brilliance from Rico Schneider to change the momentum. At the breakdown Rico sold a dummy and dipped under the advancing second row to sprint in from 20 metres. It was suddenly 16-10 deservedly so and Derry were back in the game with half an hour gone.
Derry then upped the tempo and with concerted pressure Rico was off and running again down the blind side to score in the corner. Conversion narrowly missed. As the half drew to a close Derry were up for the fight, and looking much more like themselves.

Half Time 16-15
Into the second half and Derry looked strong and began taking the game to Tullamore, however when Davy Graham on fifty minutes was given a yellow card it forced the coaches to make significant changes to the line up.
In came Mathew Orr at full back and Cole moved to the centre, while off came the unfortunate Cain McColgan as a result of the reshuffle.
Tullamore looking to exploit the numerical advantage returned to the kicking game and it was rewarded as Orr was isolated returning a kick resulting in yet another penalty. 19-15.
With yet another Penalty given away this time from David Lapsley for holding on, up stepped Tullamore outhalf Stronge once again to slot over a 45 metre pen extending the lead to 22-15.
With ten minutes to play Derry were awarded a penalty which Alex Mc Donnell slotted over to make it 22-18. Derry, now back to full strength, got set to go for the win. However as they exited from the restart they gave away another penalty for crossing right in front of the posts leaving it 25-18.
With only five minutes to play Tullamore got in behind Derry and initially Orr did well to thwart the attack but as the ball went loose Tullamore hacked it through and won the footrace to touch down in the corner, not converted with the score now 30-18.
With time nearly up a bonus point was still on the table however Tullamore, desperate to hold on to the win, were buzzing and continued with their impressive line speed in defence to snaffle out any chance of a Derry comeback. The game came to an end as a penalty then lineout to Derry just inside their own half was won, fed 9 but the extremely aggressive and hungry defence shut down all available space forcing the ball to be kicked away.
The result was disappointing and extremely frustrating, especially as City of Derry, with three Donegal eighteen year olds in the pack, Stephen Kelly, Cain Mc Colgan and debutant prop Adam Marley, had a near perfect scrum and lineout providing the backs the perfect platform. Despite that, time and time again, a mounting penalty count, a lack of concentration, poor execution and a rushing defence were catalysts to Tullamore winning.
Derry were never really threaten for sustained periods,and it was a culmination of uncharacteristic errors and that final elusive pass, which if gathered, would have easily won the game for the visitors. A week off and a few training sessions to address some areas and City of Derry will return to action with an Ulster Derby that will see 8th and 9th place separated by just two points do battle as they travel to Bangor.