Rainey come out on top on visit to The Dub

Rainey II travelled to The Dub in the knowledge their toughest test of the season so far was in store, and Queen’s II didn’t disappoint. 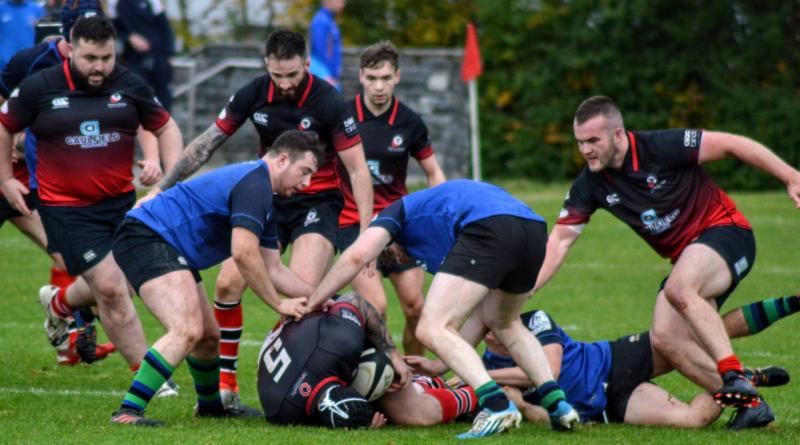 Rainey ‘2’ were 24-19 winners over Queens’ University at the weekends, thanks to tries from Harbinson, Hastings and Brown.

Rainey II travelled to The Dub in the knowledge their toughest test of the season so far was in store, and Queen’s II didn’t disappoint.  In a hectic, fast-flowing game, Rainey eventually came out on top, but as the match ended, both they and their travelling support were in no doubt about how close they had come to their first defeat of the season.

On a superb surface for running rugby, Rainey got off to a great start, with a try in the opening minutes.  A penalty kicked to the corner was secured, and flanker Harbinson powered over from short range. Out-half Kearns duly added the extras and the visitors seemed to be on their way.  The students had other ideas.

They camped in the Rainey 22’ sending attack after attack at the Rainey line, with only a combination of handling errors in the backs and stout Rainey defence holding them at bay.  Eventually the pressure took its toll and when fullback Evans was caught isolated 10m out, he was penalised pulling the ball back into the ruck. A quick tap by the Queen’s scrum-half caught the retreating Rainey payers unawares and the Queen’s centre had an easy unopposed run in for the score.  With the conversion missed, Rainey maintained their narrow lead, but it wasn’t to last.

From the restart, Queen’s piled on the pressure again, and although Rainey tried to push downfield, with Harbinson to the fore, they struggled to get out of their own half.  The Queen’s backs always looked dangerous, with the Rainey backs scrambling to maintain their defensive line. A decisive break by the students’ centre finally cut through the Rainey defence, and only a great tackle by flanker B.Hall saved Rainey’s blushes.

Kearns relieved the pressure with a long range kick, but the ball was swiftly carried back to the Rainey 22’ and this time the home side were not to be denied, their speedy winger going over the line.  The conversion only added to Rainey’s plight, and when they conceded another kickable penalty, they had a let-off when the ball rebounded from the upright.

As the half drew to a close, Rainey finally got some momentum back.  A good run by winger Moran took play into the Queen’s half. When they were penalised for off-side, Kearns sent the ball into the corner, and with Hastings claiming the lineout, Rainey’s big men headed for the line.  Harbinson rumbled forward, covered by a swarm of defenders, but was finally brought down a metre short. When they went again, the forwards were penalised and Queen’s cleared their lines.

An aggressive follow-up at the restart paid dividends for Rainey and when Queen’s were penalised, Kearns once more sent the ball towards the corner, but failed to find touch.  As the home side immediately began to run the ball back, a repeat of the first half seemed to be on the cards, but now Rainey had the measure of their opponents and the attack was snuffed out early.

Winning a penalty, Rainey once more went for the corner, and began a series of drives for the Queen’s line.  The defence were soon reduced to 14 men, as they repeatedly strayed off-side. Opting for the 5m scrum, the forwards were practically queueing up to drive ever closer. Brown got close, before lock Donaghy clearly grounded the ball.  Unfortunately the ref was unsighted and they had to start all over again. Harbinson crossed the line but was held up, but it was only a matter of time, and finally the defence crumbled to allow Hastings in for the score. The conversion took Rainey back into a two point lead.

Determined to get back into the game, Queens’s pressed Rainey back into their 22m.  Turning defence into attack, Rainey went through the phases, gradually moving upfield, until Hastings found himself with ball in-hand and acres of space in front.  He charged downfield, chipped ahead as the defence converged and then regathered in the Queen’s 22’. Quinn was there in support, but the speedy Queen’s defence seemed to have recovered sufficiently to avert the danger.  Rainey again commenced their short drive game, with first O’Neill, then McIntosh, Harbinson, Hastings and Hall all getting close, before Quinn released Brown to crash over beside the posts. Kearns was again on target and Rainey were on a high.  It was to be short-lived. Within five minutes, Queen’s were again snapping at Rainey’s heels, when their big lock split the Rainey defence and created space for their lively fullback to cross the whitewash.

With 15 mins left to play, a tense finale was in prospect, and when Rainey lost Harbinson to a shoulder injury, the concerns of their supporters increased. A Kearns penalty settled their nerves, but Queen’s continued to press hard, with only a lack of patience letting handling errors creep into their game.  Awarded a penalty in the dying minutes, they tapped, going for the try, but were crucially dispossessed to end their hopes.