'Get That Boy Home'... four words that mean so much to Eamonn Lynch 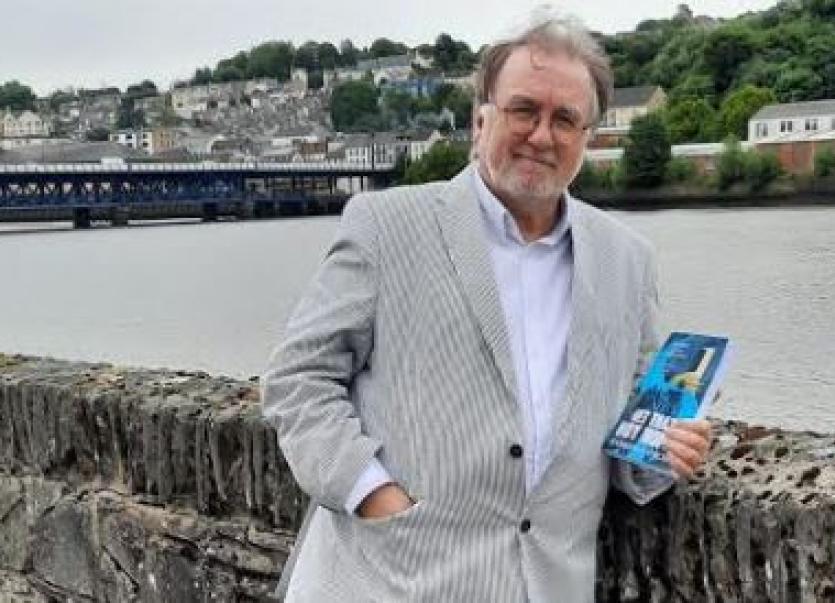 Eamonn Lynch, author of 'Get That Boy Home.'

Derry man Eamonn Lynch has just had his first book published. Get That Boy Home is a tale of fiction based on his time growing up above the family pub on Bishop Street leading up to and during 'The Troubles' as well as a period spent as an internee in Long Kesh. The main writer of the centenary pageant on the 1916 Easter Rising that was performed in the Guildhall Square to a large crowd in May 2016, Eamonn looks back at a time when a 'wee voice' in his head kept telling him to write a book and reveals his decision to dedicate it to his late brother.

Get That Boy Home is the title of a debut book by Derry man Eamonn Lynch. Falling into the genre of historical fiction it sets out to capture the mood and experiences of the times leading up to, during and beyond 'The Troubles,' told through the story of lead character, Dan Feeney.

From Derry's Bishop Street, Eamonn says while the book is fictional it is based on personal experiences.

He says: “I think it’s virtually impossible to write my first book taking in those times in Derry that I have lived through without resorting to personal experience.

“Get That Boy Home falls under the historical fiction label, therefore, I don’t present it as a true story.

“However, the chapters on family and school life are fairly typical of my life during those remarkable times. It was really lovely and indeed surreal to relive my childhood through the prism of Dan Feeney, with the vocabulary, cynicism and humour of an adult looking back into that period as a child and young boy in the 1950s and 1960s.

The hilarious story of Dan Feeney’s first date could only come from personal experience!

“As a teenager who became an active republican after the introduction of internment in August 1971, I felt well able to mesh and merge fact and fiction to mix authenticity, creativity and drama to 'The Troubles' elements of the book. The chapter that covers internment in Long Kesh certainly reflects much personal experience, as I was interned during 1974/75.

“However, this is not a book solely about 'The Troubles,' it’s more about how a fairly normal boy and teenager found himself immersed into those times of a harsh educational system and a bigoted and unequal political one.”

He adds: “My own life has, to some extent, mirrored many of these themes but again the freedom to use imagination allowed me to add humour, pathos, tension, contradiction and controversy that, hopefully, makes the book enjoyable and takes the reader to places of identification, judgement, empathy, hilarity and sadness by engendering those emotions and reflections when reading Get That Boy Home.”

He adds the book is based, 'but not entirely,' on real people.

He adds: “The school and college chapters, in particular, draw on my own memories of what to me seemed like the infliction of education and Catholicism on children by nuns, Christian Brothers, priests and lay teachers who, in hindsight, certainly had an abundance of knowledge to pass on, but were not equipped with the social skills to be around children and teenagers.

“I also used other characters that I knew or had heard about to fit into various roles throughout 'The Troubles' stories. I think this adds to the authenticity of the overall book.”

About 20 years ago I started writing poems on many themes and I still do. That was probably the lead-in to gaining the confidence to take on a book.”

He adds: “I’m one of those people who had a voice in my head saying ‘there’s a book in you’ but a louder voice told me ‘the cheek of you to think you could write a book’. Eventually, the voices quietened after I had a ‘feck it’ moment and I just started writing. Now, I have published this book and have two more germinating.”

He says three words describe his feelings at the book being published: “Relief, satisfaction and joy. Having the printed book in my hand instilled a quiet pride in the achievement of actually writing and publishing a book. Even yet I find it hard to refer to myself as a writer or an author. And those two labels will never eclipse being a dad, a grandfather, a brother, a friend and a Derryman. Writing is my hobby, all those other things are my life.”

Eamonn has dedicated the book to his brother, Hugh, who died in December 2017 after a short illness.

Eamonn says: “He is still very much alive in mine and all our family’s hearts and minds. So, a dedication to Hugh for that reason alone is entirely justified.

“However, Hugh was also instrumental in the title of my book, Get That Boy Home, which comes from a very short telephone call from my daddy in Derry to Hugh in London in 1969 when I was in danger of becoming another young Derryman lost to England. Hugh got me home. What an act of love that collusion with my dad turned out to be. He would have been so proud to see Get That Boy Home in print.”

A proud father of Emma and doting grandfather of David (15) and Penny (2), Eamonn describes himself as a 'Derryman through and through.'

He adds: “My parents Michael and Margaret (a blow-in from Donegal) are both deceased. Our family of six brothers (one now deceased) and two sisters lived in lower Bishop Street at my father’s bar (Mickey Lynch's). I am the second youngest.

“As I said, I come from a large family, so my parents had their work cut out, particularly with the boys. We lived over a small family pub, so our house was always a busy place and often an exciting one, especially when customers scattered to various rooms and the backyard if the RUC raided the bar for after-hours drinkers.

“As as boy, I loved sitting out in the bar listening to my dad holding court, telling stories and yarns to his customers.

“Getting out to play with my pals on the bankin', down 'The Line' near the river and on the streets of Bishop Street and Brook Street Avenue were my childhood highlights, and I was a nightmare to bring home for the nightly Rosary that my mum always made us say.

“My favourite quiet moments were sitting in the darkened cinemas of Derry as a young boy and youth, engrossed in the films of my boyhood heroes on the big screen. Any day I had the required sixpence I was there.

“Overall, my family memories are happy ones, and living in a locality with great neighbours and camaraderie was, and remains, very special to me.”

The schools Eamonn went to were all 'a stone's throw' from his Bishop Street home, attending the 'Wee Nuns' in the grounds of the St Columba's Church, Long Tower. After making his First Communion he transferred the Brow of the Hill, Christian Brothers School just off the Lecky Road before moving to to St Columb’s College in Bishop Street.

He adds: “I left college at 16 after basically downing tools and flunking my O-Levels. I cover much about the harsh education system of those times in Get That Boy Home.

“I drifted through a couple of junior office jobs from 1969 to 1972. However, those were times of protest initially, followed quickly by the beginning of 'The Troubles' and my attention was fully focused on what was developing in Derry in relation to that, rather than office pursuits.”

Bring That Boy Home is available on Amazon, both in paperback and Kindle format. However, he is in the process of obtaining a stock of the paperback edition and that will enable him to offer it within his DerryYarns website for immediate delivery, postage or collection, depending on the location of the reader. He will also offer the book to local book outlets and to the library.

As well as working on two further books, Eamonn has also written a play which he hopes to put on when Covid subsides.

In the meantime, poems and short stories written by Eamonn are available for free on his Derry Yarns website.

He explains the thinking about starting up his own site: “Derry Yarns emanated from having written Get That Boy Home and operating on a shoestring budget to market it. Like most self -published authors, I had tried and failed to get local, national and international publishers interested in my book.

“However, books that relate to 'The Troubles' are no longer as attractive as they once were. Rejection from publishers is the norm, although I must say that those who didn’t have the respect and good manners to even reply to say 'no,' annoyed me especially as one was a very well known local publisher!

“So, the derryyarns.com website has become a shop window for the book and has a link through to Amazon for those interested in buying it. But I didn’t want it to be just that. I have been writing poems for years and more recently short stories. So, I decided to have the ‘A Derryman Writes’ link to showcase these writings and provide them free to anyone browsing. Initially, I have put up three short stories and three poems and I can update with new material over time.”