The vandalism has been condemned by Chair Cathal Mallaghan. 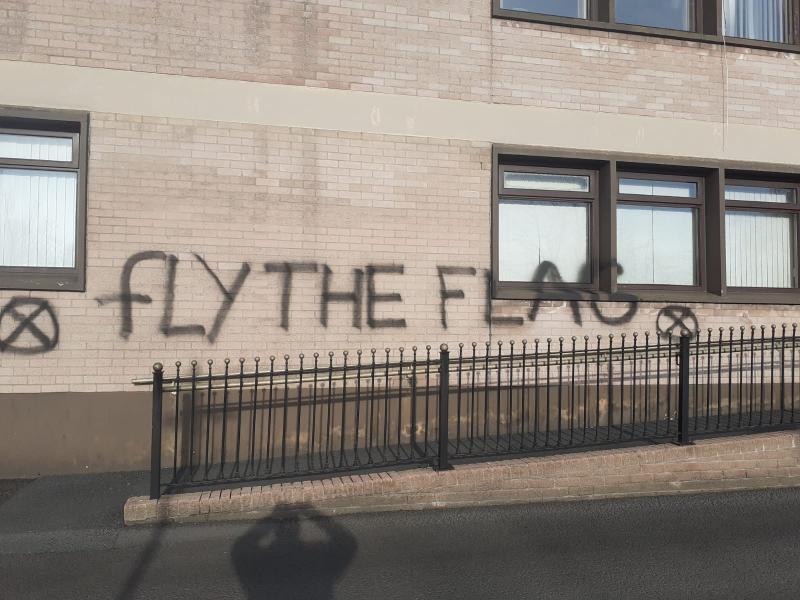 The Chair of a local council has condemned grafitti daubed on the walls of its buildings last night.

Offices of Mid Ulster District Council in Cookstown were vandalised in the attack, with the words 'Fly the Flag' spray painted on the wall.

The grafitti is thought to be in reference to an earlier decision by the council to reject a motion calling for the Union flag to be flown at half-mast to mark the passing of the Duke of Edinburgh.

DUP leader on the council, Paul McLean had called on council Chair Cathal Mallaghan to explain to Mid Ulster's constituents why the flag would not be flown.

"We requested that the Union Flag be flown at half-mast to mark the passing of the Duke of Edinburgh but the Council Chairman has declined that request," he said.

"We disagree with the decision and have requisitioned a meeting for the Chairman to explain to those in Mid Ulster who want to show their respect for the Duke of Edinburgh why this position has been taken.

"The chairman has seven days to grant the meeting.  Unionists may only make up 15 of the 40 members but we have a right to be heard and to receive an explanation.

"These are civic offices where we our residents come to register births, deaths, marriages," he said.

"It's where we provide crucial public services, from building control to economic development and from where we also operate our local bin collection services.

“To see the offices defaced in this way is completely unacceptable. This should be a safe, shared space for our residents and for our staff and such vandalism is an attack on local public services, as well as local democracy.

“I condemn it and I call on all elected representatives to do likewise”.

"MUDC has since the very start held a no flags policy to stop them becoming an issue," he said.

"All our staff have the right to come to work free from harassment and will continue to make that the case.

"Sadly we have sad individulas who are out their trying to whip up sectarian hatred through defacing public buildings, violence on our streets and wrecking their own towns and trying to drag a new generation down with them.

"John Hume always said "You cant eat a flag" and unionism should take heed and tackle the real issues in our society instead of talking flags."