Local MLAs have condemned the scenes. 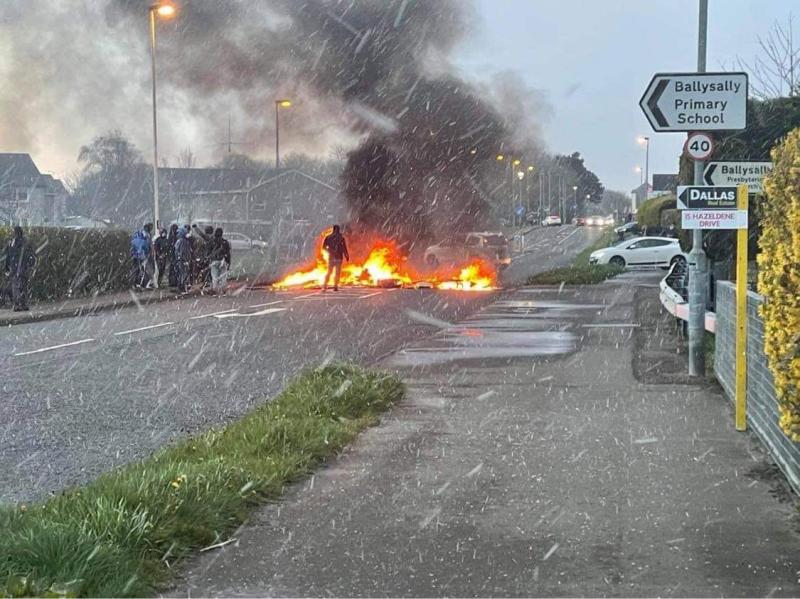 Local MLAs have appealed for calm after a number of burning objects were placed across a road in Coleraine.

The incident, on Atlantic Road in the Ballysally area of the town, began around 8.00pm on Friday evening.

A child’s trampoline was dismantled and thrown at police during the disorder, with a discarded toilet seat also among the items used as missiles.

”The last thing people in this community want is further disruption,” she said.

”I understand that tensions are running high but resorting to this kind of behaviour only damages local people and services.

“The crowd burning refuse, blocking roads and intimidating people in this community needs to stop. They need to go home and let people get on with their lives.

“This is a time for calm. Things don’t need to escalate. Young people don’t need to end up with criminal convictions. I’m appealing for everyone to exercise their influence to reduce tensions in our community.”

"Shameful scenes in Ballysally this eve & nothing more than anti social behaviour & attention seeking - which is sad in itself," she tweeted.

"Clearly, bad behaviour of a few & not representative of Coleraine.

"Go home before you get a record ruining your own life & those around you."

Local DUP MLA Maurice Bradley said the events were taking away from the good work being done in Ballysally.

”These scenes I witnessed when I visited the area on Friday evening with well-known and respected community activists are not the answer,” he said.

”The important thing is to make sure young people do not end up on the wrong side of the law with a record that could hamper future employment prospects.

”The residents don’t need the name of their estate plastered over the newspapers for the wrong reasons.

“There is so much good community work taking place in Ballysally, so much good work ongoing within the estate, a small number of youths are taking the spotlight away from that good work by protesting this evening.

”My advice, if anyone wishes to take it on board, is for young people to pick up the baton and get involved in politics.”

A number of police landrovers remain at the scene. Police are yet to comment officially on the incident.