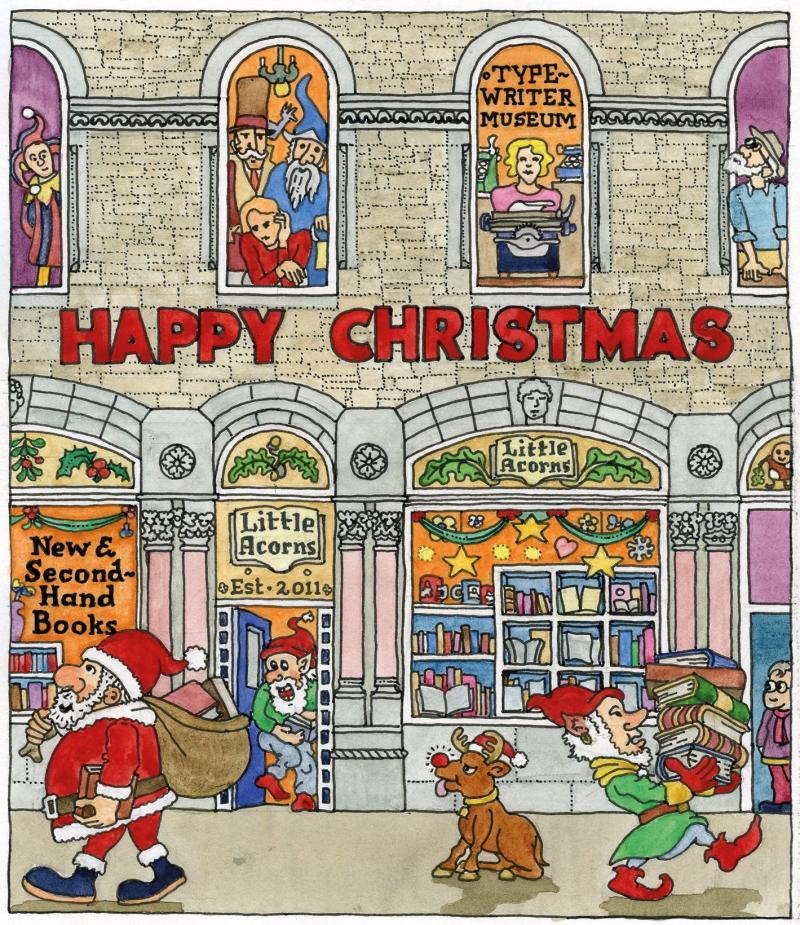 The Christmas artwork created by Tim Webster in honour of the Little Acorns bookshop.

“When civilisation seems to be collapsing all around us, she relocates and expands her bookshop. That's heroism. Or maybe just plain thran. What's not to celebrate?,” declares Tim Webster.

The local artist, who arrived in Derry by way of England and Egypt, has used his talent to pay a Christmas-themed tribute to an independent bookshop owner in the city.

The woman he’s speaking of in such glowing terms is Jenni Doherty who owns Little Acorns on Foyle Street.

The Christmas card illustration of the shop depicts the detail of the listed building on Foyle Street and Jenni’s future plans for a ‘wee typewriter museum’ amongst ‘other clever humorous touches’, as the Derry woman put it herself.

Widespread praise has followed with locals hailing the artwork as ‘class’ and requesting a print for their homes. Born in Egypt, Tim had an interesting, if not unusual, introduction to life.

He explained: “My Dad was in the army at the time, so I was born in Moascar Garrison beside the Suez Canal.

“Because of growing unrest in Egypt, families were evacuated soon after my arrival, and I grew up in Strawberry Hill, south-west London.

“I passed the 11+ without realising I'd sat an important exam, and embarked on a pretty dismal academic career at Hampton Grammar School.

“The cool set, which included Brian May, were several years ahead of me, and I was at the further end of the uncool spectrum, so I  was  largely ignored except by a small coterie of other misfits who listened to The Doors and the Kinks, smoked behind the glider shed and admired Aubrey Beardsley and Oscar Wilde.”

He continued: “Dad introduced me to the works of George Orwell and William Blake, and these six influences have framed my world view ever since.

“As I was not academic, legal, military or medical material, I attended art college in Cheltenham and after an interesting four years came to Derry in 1972 to work as a landscape architect.

“Life and work here were both pretty chaotic until I met my future wife Bernie in 1977.”

Tim helped to administer the 'Spruce Up' scheme in the city which involved tidying up bomb sites and painting murals on walls and hoardings.

He then segued from landscape architecture into graphic design, and in 1984 got the opportunity to design murals for the new Richmond Centre.

“As Derry did not have a museum at the time, and fired up by the inscription ‘If Stones could speak...’ I drew pictures of forty buildings, each of which told a story about this wonderful city.

“Each drawing also features scenes from the life of St Columb and portraits of local people- no politicians or international celebrities, just folk I happened to meet, who all had their own story as well (everybody does). The whole mural was held together with the notes of the ‘Londonderry Air’ - I believed then, as I do now, that musicians are key workers and should be respected as such.”

Tim’s works cover different subject areas, some have a satirical slant on politics, and they often evoke an element of humour.

Having lived in Derry for almost 50 years, famous sites around the city regularly feature.

The 69-year-old says that ‘making marks on paper always preoccupied me, though controlling them is still problematic.’

His 'political' cartoons started with Brexit - he views the European project as deeply flawed but ‘the lies, corruption and proto-fascist populism’ which informed the referendum campaign ‘exasperated and alarmed’ him beyond measure.

For the most recent work he felt compelled to commend the courage shown by Jenni in such uncertain times.

It is a resolve he admires in other local shopkeepers and he’s of the view that we should do our best to back local businesses – a sentiment that resonates now more than ever.

Tim said: “The pandemic has accelerated a lot of, to me, disturbing trends. We have seen the shabby behaviour of Easons and Sir Philip Green, and the remarkable way in which McDonalds and KFC benefited from government policy while the self-employed got a kicking.

“So what does Jenni do? When civilisation seems to be collapsing all around us, she relocates and expands her bookshop. That's heroism. Or maybe just plain thran. What's not to celebrate?”

He added: “Our local shops and shopkeepers are some of our greatest treasures, and Jeff Bezoz really doesn't need another trillion pounds.

“I want to pay tribute to her, to Angry Cherry, Cool Discs, the Yellow Yard, Foyle Books, Thomas The Goldsmith, McLaughlins Hardware, Cedar Restaurant, Pyke & Pommes and all the other local enterprises that make this town a delight to live in. Apologies to those not on this attenuated list.

“The pandemic has made me want to celebrate everything within walking distance of my home. More drawings and cartoons will, I hope, follow.

A limited supply of the artwork is available to buy at Little Acorns.