Causeway Coast and Glens Borough Council has approved the plans.

An accessible play park is to be built in Limavady after a four-year campaign by a local pressure group paid off with the local council approving plans for the site.

The site at Roe Mill Playing Fields was agreed at a meeting of Causeway Coast and Glens Borough Council's Leisure and Development Committee last week.

Local woman Gemma Lynch set up the 'Accessible Play Park for Limavady' Facebook page in 2016 after looking enviously at the opening of Flowerfields Park in Portstewart.

The Portstewart facility includes play equipment for users with disabilities and sensory needs, and was the council's flagship project four years ago.

“It's put my faith back in politicians and council members,” said the mother-of-two.

“I grew up with a brother who has autism. A lot of his issues are sensory, and to have a park in Limavady that matches that need for the whole community was the driving force for it.

“I noticed as well that the park needs in Limavady were badly neglected, and also I have friends who have children in specialist wheelchairs who couldn't use the facilities.

“For all the needs that Limavady has, we needed a better park, and there was an opportunity to go for an accessible park like the one in Portstewart.

“I thought the quickest and cheapest way to get attention to it was to start the Facebook page and demonstrate the need.”

Interest in the park sprung up immediately, and Gemma was invited to take part in initial talks around the project, but she was worried the issue would become politicised.

“I was worried the park would become a sounding board for local politicians to gain votes, I was very cynical, it felt like everything west of the Bann was being neglected on the council,” she said.

“Over the last couple of years, though, it seems to have brought together a lot of the councillors who tend to differ from different parties and they all decided Limavady was in bad need of it.

“When push came to shove, they got the park and that's all I care about.” 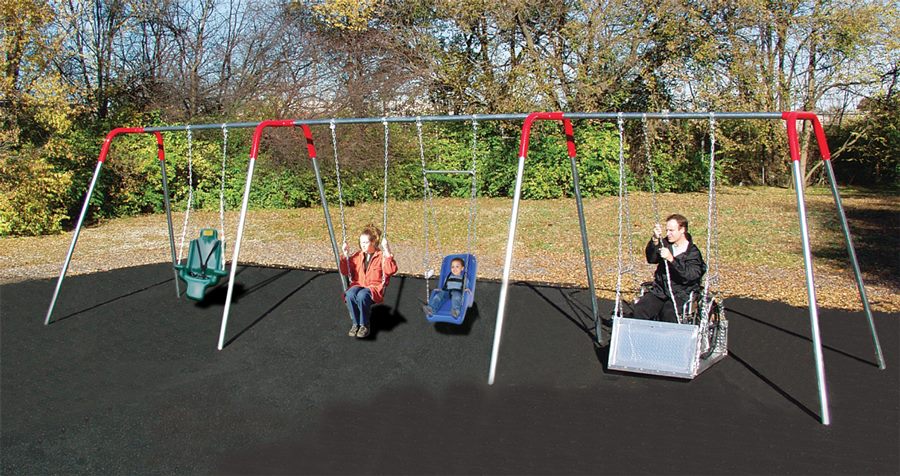 Accessible swings will be included in the new facility.

With the project nearing a conclusion, the onset of Covid-19 left the mental health nurse worried about its future under the new restrictions.

Now though, she sees new opportunities, not just for the park, but for Limavady as a whole.

“We were sitting in 2020 with Covid restrictions, parks being closed and I thought we were never getting this,” she said.

“But with the fact we can't go on holidays anywhere, those local days out are going to make a real difference.

“People are going to come to Limavady if there's a big expansive outdoor area for children and adults to relax in. They'll stay in Limavady and shop local. Go to local cafes. They'll make a day of it.

“If there's one positive thing that's come from Covid, it's looking at our local resources and using them to our advantage, and that's what's come from this park.”

Limavady councillor, James McCorkell, was involved in the initial talks, and is delighted to see the plans coming to fruition.

“After far too many disappointments and let downs, Limavady's new Accessible Playpark is underway,” he said.

“The Outline Business Case was agreed by all parties at last week's Leisure & Development Committee meeting, and that's good news for Limavady.

“Work will commence shortly on bringing the site up to spec to leave it safe and suitable for the play park which, as per the Outline Business Case will be in place for August next year.

Alderman McCorkell paid tribute to the community for pulling together to make the project possible.

“This is your play park. You fought hard to secure it and I want to thank everyone and all parties from across the community for throwing their support behind it,” he added.

“My party has been working with Causeway Coast and Glens council for a number of years regarding the play park,” she said.

“I am delighted that it received approval at Tuesday night’s Leisure and Development Committee to be built on the site of Roe Mill Road playing fields.

“This play park is a much-needed facility that the people of Limavady and I will continue to work with the Council to ensure its delivery for the target year of 2021.”

For all those who gave their time to what was a lengthy process, there is now a feeling of pride at having made it happen, and Gemma is keen to see the community play a role in its opening.

“If anyone is to open it, I would love to see the Head Boy and Head Girl from Rossmar. This time is going to pass, but these things last and it's those people who will be around to use the parks,” she said.

“The happiest I'll be is sitting in the park, with my kids thinking, 'I did something. I listened to my gut and I was right'.

“That's the biggest satisfaction I can get.”