Calls for new pathway along Gulladuff to Maghera road

A local councillor has called for the footway to be included in plans. 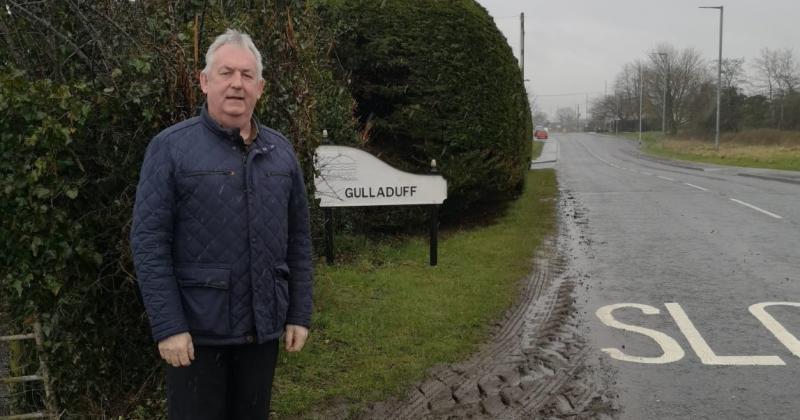 Sean McPeake on the Gulladuff Road.

A Mid Ulster District councillor has called for the construction of a footway on the Gulladuff road, leading to Maghera.

Councillor Sean McPeake made the suggestion following a commitment from the Department of Infrastructure (DfI) to developing footway provision across the country.

“It is more important than ever that adequate footway provision is available to keep communities connected and ensure that our roads are as safe as possible for vehicular traffic, pedestrians and cyclists alike,” he said.

“I have requested DFI Roads Service to consider developing an 800m footpath link on along the busy A42 road from the edge of Gulladuff village and towards the town of Maghera.

“The existing footpath within the village of Gulladuff stops a short distance from the centre of the village on the road towards Maghera.”

Support for the proposed footpath extension has also come from local GAA club Erin's Own, as well as Termoneeny Running and Cycling clubs, whose members regularly use the road.

Should the missing section of footway be developed, Cllr McPeake said it would leave a continuous 25-mile stretch of footway between Gulladuff, Coleraine and the north coast.

The Carntogher councillor also feels the development would service the increased numbers of people exercising outdoors.

“The present Covid 19 pandemic has seen unprecedented numbers of people out exercising, walking, running and cycling,” he said.

“The DFI Minister has recently stated that she plans to bring a renewed focus to developing footway links that will encourage outdoor participation in walking activities, which is entirely commendable.

“I have, for sometime now, been liaising with DFI requesting to have this footway scheme developed.

“I have recently received assurances that this scheme is being actively considered for future development and that a design plan for the scheme is currently being drawn up.

“I wish to commend DFI for their stated indication to develop this scheme when the necessary budget becomes available,” added Cllr McPeake.