Haircuts back on the menu come July 6 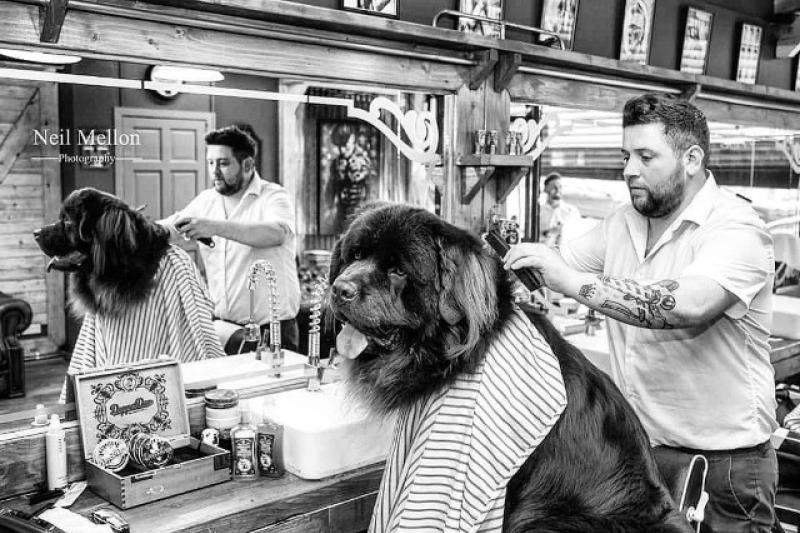 Denis McDermott tending to one of his canine customers

A Derry barber has hit out at the Northern Ireland Executive for not providing clear guidelines on how his business will operate when it reopens on July 6.

Denis McDermott, owner of Muckers & Co barbers on Carlisle Road, said people in his industry have been left in the dark about what the 'new normal' will look like for them.

With a lack of government guidance, Mr McDermott says he has been forced to look to the Hair Council, a professional body for registered hairdressers in the UK, for advice.

"It's great to get reopened again but we haven't been given any clear guidelines," he said.

"My friend is a barber in Spain and he said for the first two weeks they all had to wear masks and gloves and he spent a lot of money getting the stuff and now the whole thing has just been forgotten about and no one is using them.

"But in Germany everyone is wearing masks by law and they have gone completely cashless.

"As barbers and hairdressers we need to know what will be expected of us."

Like most barber shops, Muckers & Co operated on a walk-in basis, but following a recommendation by the Hair Council they have implemented an online booking system.

"I don't really know how well it will work," said Mr McDermott.

"We need to be busy all day to build our money back up again."

Mr McDermott believes the hair and beauty industry may have changed for good.

"A lot of barbers who were self-employed and working in shops aren't going to go back again. They will just work from home.

"And a lot of people have bought their own clippers too and they might never be back. There is still a lot of fear out there and it might take people a while to adjust.

"We're excited to get back to business and we have been getting the shop done up to get ready but there aren't that many people up the town, even with the shops open again.

"We have our regulars but it's going to take us a while to get our business up and running again.

"Some businesses were doing cuts on the sly but none of my staff have been cutting and we've lost a lot of money."

Mr McDermott believes the timing of the reopening may see local barbers and hairdressers losing out.

"Caravan parks are reopening on June 26 and half of Derry has a caravan so lots of our customers might be on holiday," he said.

"And if barbers in the South open first we might lose a lot of business to them too."