New Bishop of Derry and Raphoe ordained at Armagh Cathedral

The new Bishop of Derry and Raphoe, Rt Rev Andrew Forster, was ordained by the Archbishop of Armagh last Sunday afternoon 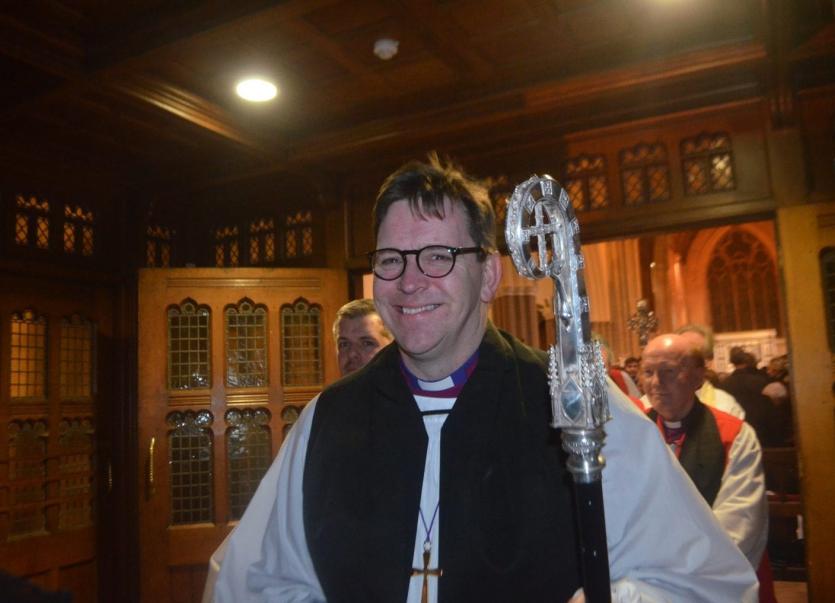 Bishop Forster was ordained at a service at St Patrick's Cathedral, Armagh on Sunday, December 8

The new Bishop of Derry and Raphoe, Rt Rev Andrew Forster, was ordained by the Archbishop of Armagh at a Service of Consecration in St Patrick’s Cathedral in Armagh last Sunday afternoon, in front of leaders of the other main churches in Ireland. He succeeds Rt Rev Ken Good who retired from episcopal ministry in May.
The stormy December weather did not deter scores of people from the Diocese of Derry and Raphoe, or from the parish where Bishop Forster had been Rector, from travelling to Armagh for the ordination, and the church was filled for the occasion.
The congregation heard the preacher, Revd Canon Maurice Elliott – who has known the new bishop since their first day at Theological College – describe Rt Rev Forster as a larger than life personality with an infectious sense of humour. “He will bring an immense range of gifts and abilities to this new role,” Canon Elliott said. “He is a man of deep conviction, yet he tempers this with an instinctive capacity to care.”
Canon Elliott said from the moment, just over 30 years ago, that he and Bishop Forster arrived “literally together” into Braemor Park, to begin theological training, they had struck up what had become a lifelong friendship. It was a singular honour, he said, to have been invited by the Archbishop to preach on this momentous occasion of Bishop Forster’s consecration.
Their long friendship did not prevent the preacher from sharing one story – at the Bishop-elect’s expense – from the rugby pitch at Trinity College during their first year of training together in 1989. “In the rather vain pursuit of fitness,” he said, “the Bishop-elect and I decided we would attend Monday evening rugby training and we were perhaps only five minutes into a warm-up when the coach told us to get into pairs. So, the two of us joined forces. The instruction then followed that we were each to piggyback our partner the width of the pitch and back which I, having opted to be number one, duly did. Then, as the coach shouted for a swift role reversal, I can honestly say I’ve never seen anyone move so fast in the direction of the changing room as he shouted back over his shoulder in my general direction, ‘Come on, we’re going.’ And to be fair, we never went back.
“So,” Canon Elliott said, “maybe on that occasion, Andrew didn’t quite demonstrate himself willing to carry a heavy burden but, in so many other ways, the Bishop-elect has proved himself more than able to bear significant responsibility: first through the years of his curacy at Willowfield; then as a chaplain at Queen’s; as Incumbent of Drumcliffe; and most recently as a much, much loved Rector of Drumglass.”
The preacher said he had never heard anyone express anything other than deep appreciation of every facet of the Bishop-elect’s ministry. “As a teacher, as a pastor, as an evangelist, as a leader, as an Archdeacon, through his involvement in the structures of the General Synod and the Representative Body, Andrew has shown himself to be diligent, capable, faithful, popular and loving. And in all of this he has been wonderfully supported by Heather, by Hannah, Patrick, Megan, by his wider family, and, not least, also by his late parents Victor and Joan. And Andrew, we all recognise how deeply proud they would have been to have witnessed this moment.”
“Bishop-elect Andrew James Forster,” the preacher said, addressing his friend directly, “on this day our deepest prayer for you is that you will stay close to the Lord who was willing to suffer on your behalf. We ask that you may remain focused on the message of the Cross and the empty tomb and that as you are able to do that you will prove yourself not only faithful but resilient and strong. Thirty years ago, you didn’t feel minded to run across a rugby pitch with me on your back but, as you learn increasingly to lean on the Lord’s word for strength and on the Lord’s spirit for stamina, our confidence is that you will run well the marathon of episcopal ministry and that in due course you will finish that race. You cannot do it in your own strength, so even now choose again to undertake it only in the name, and for the sake of, the one who laid down his life for you, and who alone is able to sustain you.”
The Archbishop of Armagh, Most Revd Dr Richard Clarke, was assisted during the Consecration by the Bishop of Meath and Kildare, Most Revd Patricia Storey and the Bishop of Tuam, Killala and Achonry, Right Revd Patrick Rooke. The three were joined for the laying on of hands by the other Church of Ireland serving and retired bishops present, including Lord Eames – a former Bishop of Derry and Raphoe. Next, the newly ordained bishop was vested with his episcopal habit, before being presented to the congregation by the Archbishop, with the words, “Brothers and sisters in Christ, I present to you Andrew, Bishop in the Church of God.” Bishop Forster was then acclaimed with warm and loud applause.
Among the many dignitaries from other Churches at the Consecration were the President of the Methodist Church in Ireland, Rev Sam McGuffin; the President of the Irish Council of Churches, Rev Brian Anderson , the Roman Catholic Archbishop of Armagh, Archbishop Eamon Martin; and the Moderator of the Presbyterian Church in Ireland, Dr William Henry. North West Church leaders present included the Bishop of Derry, Dr Donal McKeown; the Bishop of Raphoe, Most Rev Alan McGuckian; and the Methodist Superintendent, Rev Richard Johnston.