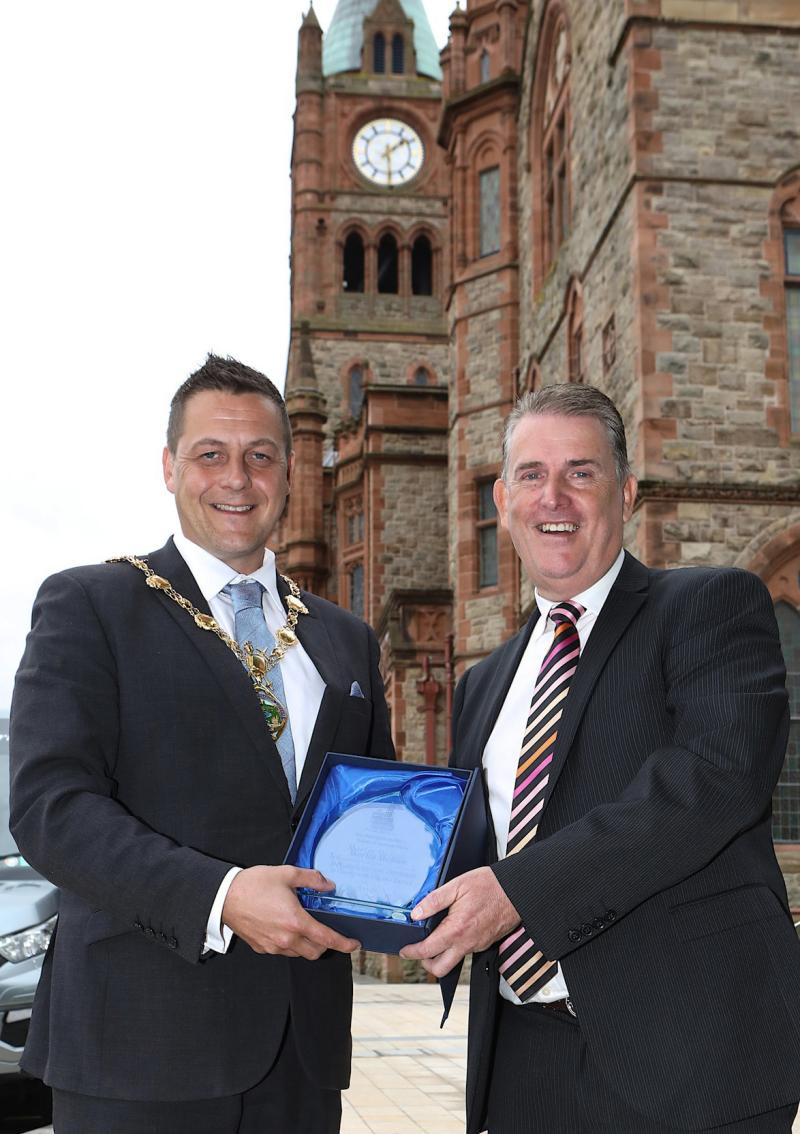 A Derry man who has raised over £1 million for charities has been honoured by the Mayor of Derry City and Strabane District Council.

Those who know Martin Mullan often refer to him as 'Mr Charity' and are well aware that he is passionate, persuasive  and hyperactive.

Martin has always been involved with fundraising, promoting the city as well as helping and promoting young people throughout Northern Ireland.

Events such as the Mayor's Parades, Hands Across the Bridge, Mayor for a Day, 101 Santas and the world record of 10,001 Santas (actual number on the day was over 13,000 people) and many more.

Some of the charitable organisations he has been involved with throughout the years range from the Junior Chamber of Commerce, Young Enterprise, Childline, Round Table, the Grove Theatre Group, Reach Across and others.

Speaking at a reception in the Guildhall honouring the work of the Grove Theatre Group, Mayor Alderman Graham Warke paid tribute to Martin.

He said: "Martin does so much behind the scenes that people aren't even aware of.  I, myself, have been involved with several of his projects including the world record Santa event - I was so proud that this event sent a great message around the world about our city whilst raising much needed funds for four very worthwhile charities.

“Throughout the years, he has passionately promoted our  city of Derry and it's people - I felt that it was important that the city and district of Derry recognised him and, therefore, I was delighted in my year as Mayor to present him with the award".

Martin said he was 'delighted' to receive the award but stressed 'the honour should not be for me but for the many wonderful people' in the city who helped throughout the last four decades.

He added: “I may be the one in the front but the real heroes are the many people who supported and helped make all the events so successful.

“I also want to take time to thank my wife, Pamela, who helps me with every project that I am involved with and, of course, all my family and friends - I love you all."

In attendance at the reception, were a small representation of volunteers from throughout the life of Grove Theatre Group., which has been running for 42 years.

Founded in 1980 by the late Tony O'Donnell and for the last 22 years led by Martin and Roderick Canning, the group coaches and develops aspiring actors and performers throughout the city to help them craft their skills on stages across the North West.

It has gone from strength to strength with over 250 members at any one time and thousands of local young people from cross- community who take part in the various activities carried out each year.

Martin said: “The group provides opportunities for young people and adults to participate in theatre activities and events not only developing their acting skills but also developing their confidence, life skills and much more. “

Several past local performers have gone on to worldwide fame - : Bronagh Gallagher (The Commitments), Damian McGinty (Celtic Thunder), Jamie-Lee O'Donnell  (Derry Girls), Laura Keogh, fomerly Doherty (Pop Idol) and many many more.
A proud Martin said: "All our members are stars in their own right.  It's not easy to stand on a stage in front of up to a thousand people and perform, yet our members never fail to deliver!".

Prior to the pandemic the group celebrated its most successful period in its long history - from 2017 to 2019 the group produced four musicals, three pantomimes, three Halloween street theatre events and ghost tours.

When lockdown hit in March 2020, the group were well into rehearsals for Disney's show 'High School Musical' which, unfortunately, had to be shelved at the time.

Martin said: “We were blessed with Stephen Carlin who turned to online methods and kept the cast enthused with dance routines, quizzes and many other activities.”

Roderick Canning, chairperson, said: "It was important that the group did not simply disappear as the group takes over a 100 local young people off the streets each week, giving them purpose and opportunity - there is so much more to the group than the final performances." 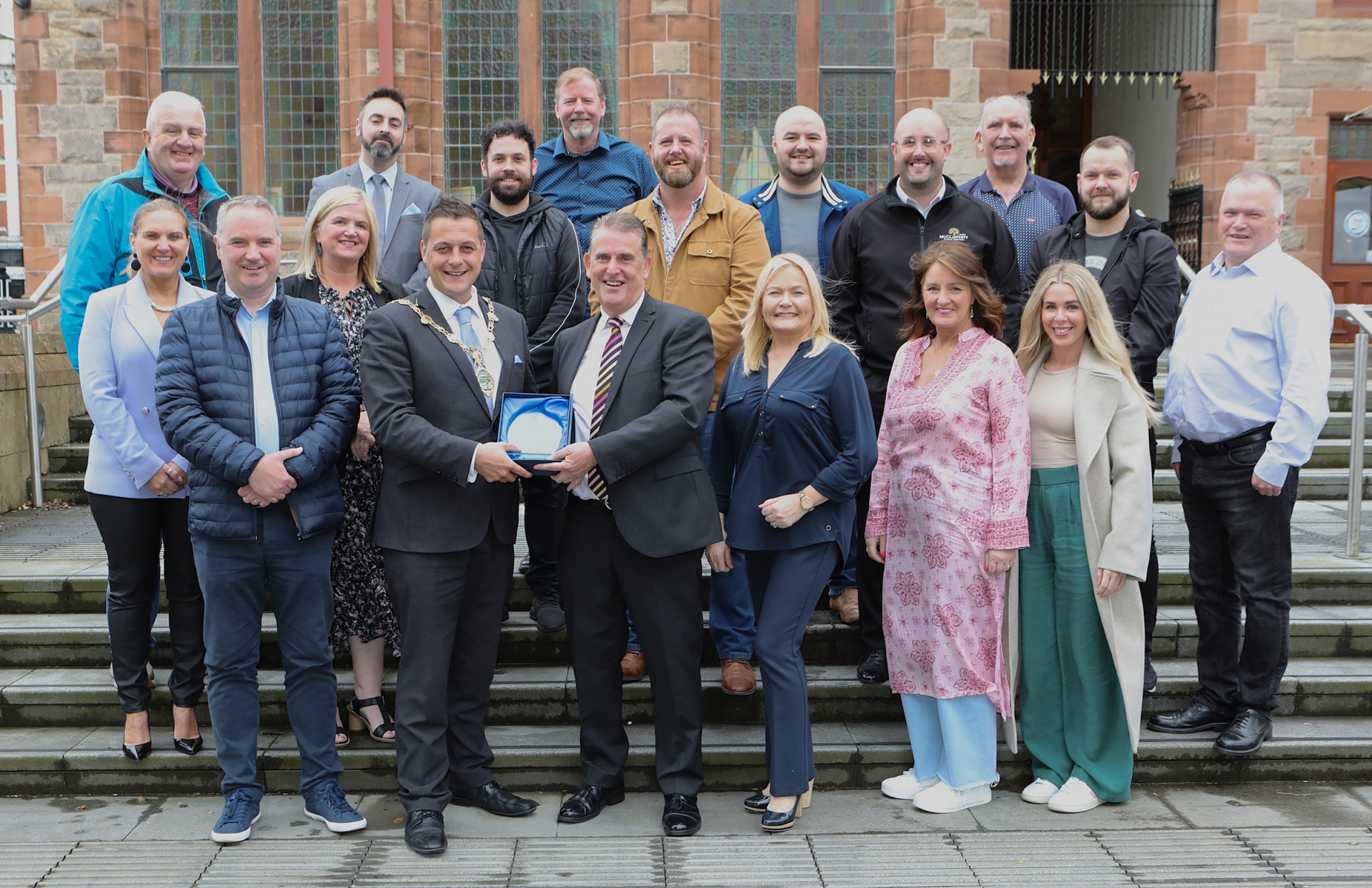 Mayor Alderman Graham Warke and Martin Mullan pictured with members of the Grove Theatre Group at the civic reception.

The group has now rescheduled  the production of 'High Street Musical' from June 29 to July 2 next.

Roderick added: “We are delighted to report that the tickets are selling fast.  This will, undoubtedly, be another resounding success following in the steps of the previous productions of 'Grease' in 2018 and the highly successful production of 'Hairspray' in 2019.

Roderick acknowledged the group could not run without the wonderful and talented production team consisting of Roderick, Stephen Carlin, chorographer, Lana Campbell, musical director, Paul Doherty and, of course, Martin.

He added: "This town has so much talent and through groups like the Grove Theatre Group this talent can be showcased. We are based in the Millennium Forum and I want to thank David McLaughlin and all his staff for all their assistance throughout the years."

Roderick also thanked everyone throughout the years who has helped the group in any way - such as actors, back stage personnel, lighting, sound, music, chaperones, 'tea people' and, of course, the parents and families who have supported the group.

They have many other big productions in the pipeline and would welcome any new members who wish to come along and participate.

They would also welcome any offers of support behind the scenes.  Martin can be contacted on 07801011813.

Martin and everyone present thanked the Mayor for the 'wonderful' civic reception and congratulated  Alderman Graham Warke on his very successful year.