James McKeown was killed in May 1922. 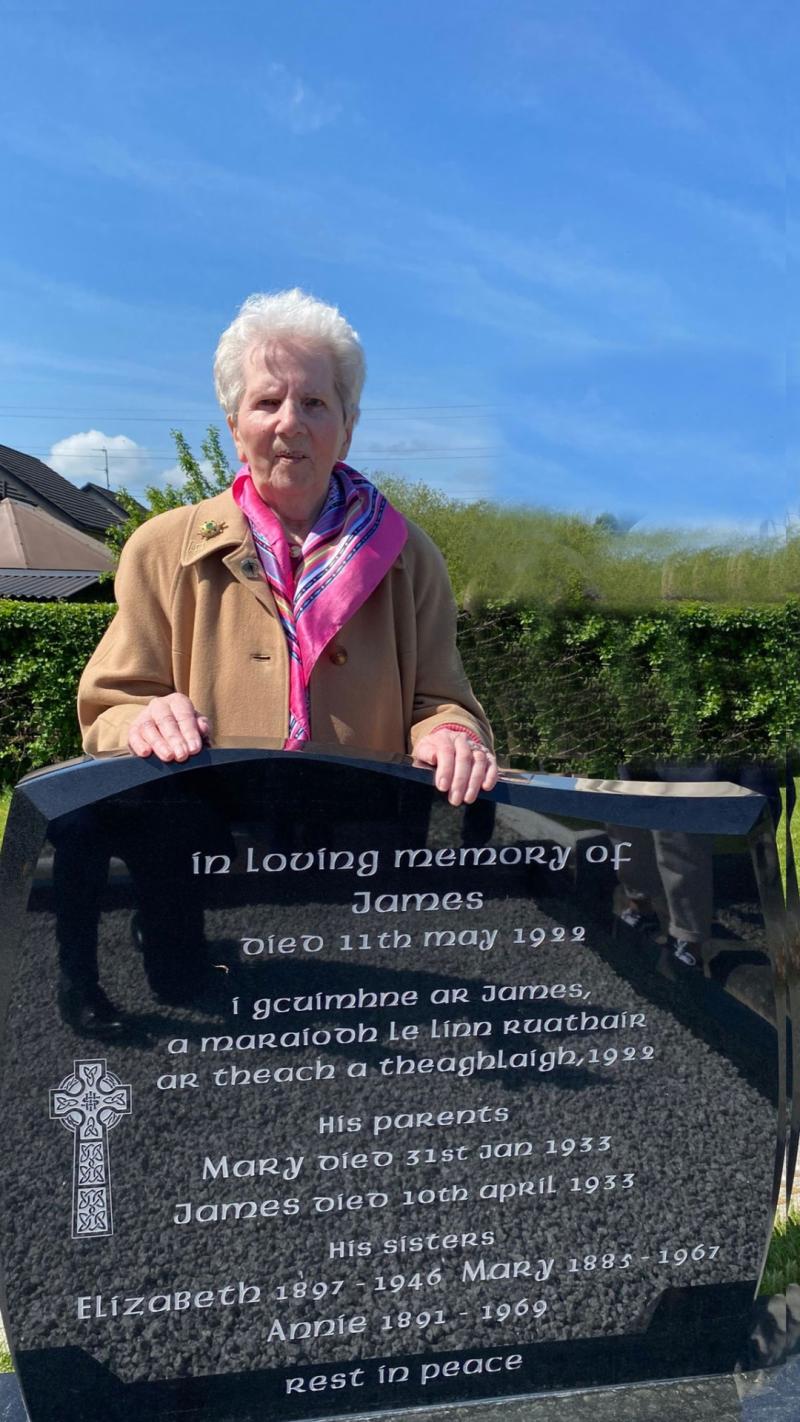 A gravestone was unveiled recently to mark the centenary of the murder of a ‘forgotten’ victim of the newly created Northern state.

James McKeown (38) was shot dead by masked B-Specials on May 11 1922 in his parents’ farmhouse in rural South Derry. The three-man gang, armed with a rifle and two handguns, forced their way into the house in the early hours of morning, ordered James and his two brothers from their beds before lining them up at the fireplace and gunning them down in front of their parents.

The two other brothers suffered terrible wounds but survived – Frank (27) was hit 16 times while Thomas (21) was shot eight times. Another brother, Henry – Divisional Intelligence Officer of the IRA’s Second Northern Division – was at a leadership meeting in Dundalk when the farmhouse was attacked. Frank and Thomas were also both Volunteers.

The sectarian atrocity made worldwide news – including being covered by the New York Times and Sydney Morning Herald -– coming as it did just six weeks after the murders of the McMahon family in Belfast, and amid rising fears for the fate of the Catholic minority in the new state. 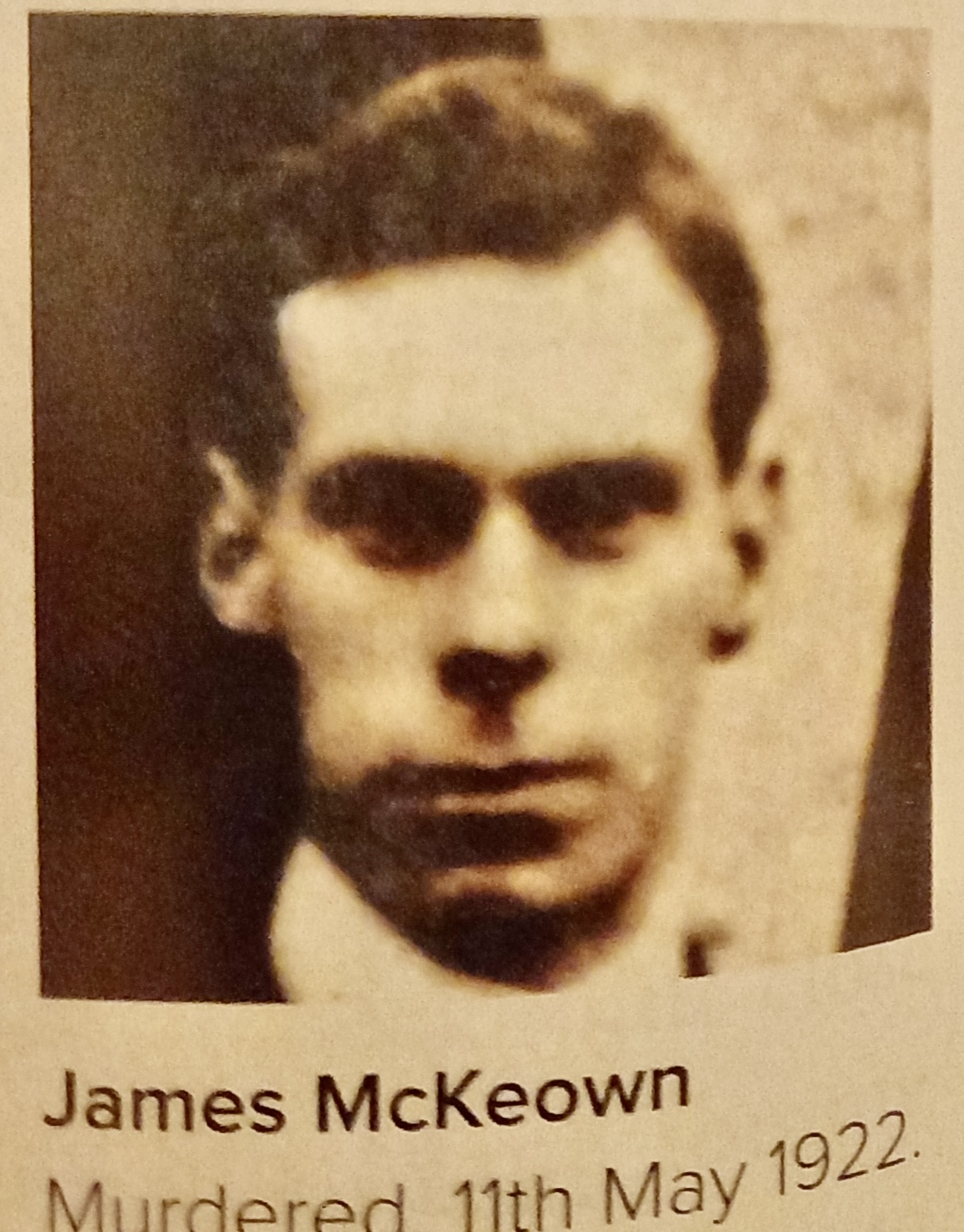 On Sunday, descendants of the McKeown family joined local people in The Loup for the unveiling of the new headstone on James’ grave at St Patrick’s church.

After a blessing of the grave by parish priest Fr Martin McArdle, James’ niece, Bridie Millar (née McKeown, 92) from Andersonstown in West Belfast, told those gathered how she was delighted that the greater McKeown family who now live in Monaghan, Cavan, London, Newry, Donegal and Belfast had put up the headstone on the McKeown plot.

After thanking Noel McKeown – a grandson of the wounded Frank who wrote a book about the McKeown shootings – for organising the event, she told those gathered: “There are six people in this grave and the only one I didn’t meet was my Uncle James.

“I met my grandmother and grandfather about 1932 when my father returned to the farmhouse and I met my three aunts who are buried here.

“I was last here many years ago and the grave was overgrown. It’s fantastic that a proper gravestone has been erected for future generations to visit.” 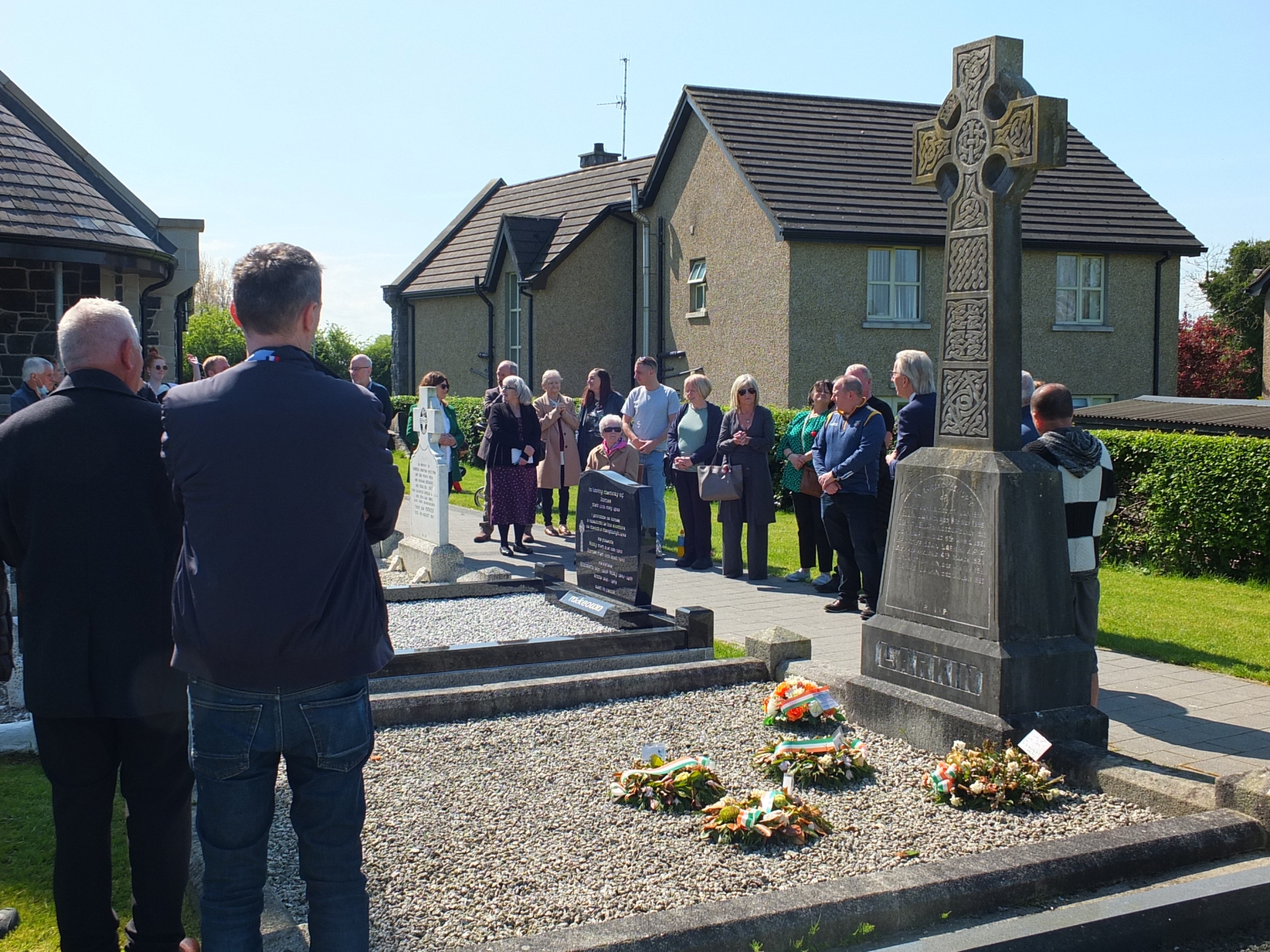 Some of those who gathered at the churchyard.

Thomas’s grandson, former Sinn Féin MLA Máirtín Ó Muilleoir, said they were here not just to pay tribute to James, but to all the brothers and the entire family “because it was a very dangerous enterprise in those times to be a patriot”.

“For the McKeown family of that time and for the four incredibly brave and gallant brothers, I’d like to show our appreciation to them 100 years later.

“And 100 years on, it’s a time of great optimism and a time of great change – and we’re right in the heart of it here in The Loup in County Derry, which has been driving that change for a long time and led us to a better place.

“I’m certainly filled with hope for the future. The McKeown brothers were living in a state and at a time where it was very, very hard to be who they were. Then their children were brought up in a state where they really weren’t welcome at all, and it was very hard times for them as well.

“And today we’re in a place where they’ve come into their own a little bit in trying to create a society where everything is shared, everybody’s at the table and where there is peace and reconciliation with their neighbours.”

During the attack, a mask fell off one of the gunmen, and Thomas recognised him as a B-Special called William Brown who lived two miles away. Brown was charged with murder, but was acquitted after a high-profile trial.

Noel McKeown and local historian Sean Corey then took the relatives on a visit to the old McKeown farmhouse in the townland of Ballymulderg, where the present-day occupants kindly let the visitors inside.

Tribute was also paid to neighbours who went to the house to render aid in the immediate aftermath of the shooting and, despite a military curfew, went for a doctor, particularly the O'Kane family. "That bond cemented in the brutality of the attack has remained between the families to the present day," added Noel McKeown.

The McKeown family members present included the children of Frank’s son, also Frank, a father of six from Coolnasilla in Belfast who was murdered by the British army on his way to open his shop in Lenadoon in July 1972, 50 years after his own father had been badly wounded in the Derry attack.