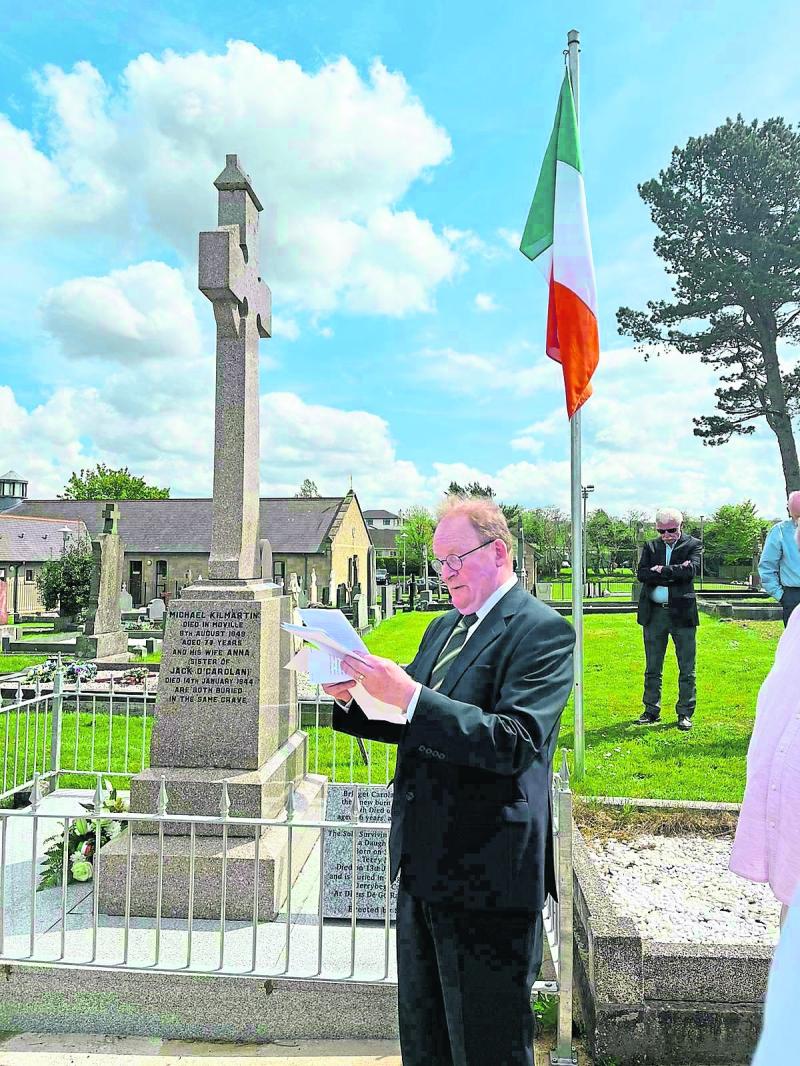 Sunday, May 8 saw the centennial commemoration of Lieutenant John J (Jack) O'Carolan and his nephew Denis P Kilmartin who died in previously unclear circumstances on May 6, 1922 at the start of the fratricidal Irish Civil War.

The organising committee who refurbished the monument in St Patrick's  cemetery in Dungiven were delighted to welcome Jack's grandson Sean MacBride, son of the only surviving child and daughter Terry MacBride (nee O'Carolan) and his great grandson Joe MacBride as well as other members of the MacBride/ O'Carolan families.

After a brief wreath laying ceremony at the Republican monument in the Benedy near the site of the executions, a talk was given by local man Eugene McCloskey before repairing to the cemetery where the central Republican plot is located.

A presentation was given to Councillor Sean McGlinchey of a framed picture of Lieut O'Carolan and a wreath laid by Joe MacBride.

There then followed a resounding oration from Sean MacBride telling of the story of the killings, their impact and the subsequent history of the O'Carolan and Kilmartin families and the effect that night in May 1922 had down through the generations.

The retired judge said: “In the immediate aftermath of their deaths, the RIC and B Specials came to the Kilmartin’s home on the Lower Main Street in Dungiven and told the family that Crown Forces would kill them if they did not immediately get out of Dungiven.

"Shortly thereafter, thanks to the IRA In Dungiven and to Father Walter Hegarty CC, the family went to permanently reside in Moville when a house was provided by Charlie and Vincent Sweeney from Dungloe.

"Annie Kilmartin gave up teaching, having suffered a nervous breakdown from the loss of her youngest brother and her youngest son.

"During her final hours I pledged to her that I would honour my Granda Jack’s good name and work night and day for a 32 County All-Ireland Republic through peaceful and constitutional means.

"Before he died the Late Commandant Tom Morris (who replaced Charlie Daly as O/C of the 2nd Northern Division) told me outside Moville Church after mass one day about the death of my Grandfather 'Sean, it should never have happened.  I am so sorry.  He was a Great Irishman and Patriot'.

He added: “Thanks to everyone involved in the organisation of this wonderful Commemoration.  The family and I are eternally grateful.

"In particular, and I hope I am leaving no one out, a special thanks to the following persons; Seamus McReynolds, Marley O’Kane, Andy Guy, Cathal Ó hOisín Cathaoirleach,Councillor Sean McGlinchey and all the members of the O’Carolan Kilmartin Sinn Féin Cumann of Dungiven, Eugene McCloskey who presided over and spoke at the Republican Monument in the Benedy.

"I am a proud member of Sinn Féin.”

For the not inconsiderable local crowd who attended this was a first, and it was a apt and fitting tribute on the occasion.

Proceedings were brought to a close with the National Anthem and copies of Sean's full speech are now available from the office at the Sinn Féin Office 81 Main Street, Dungiven, County Derry.