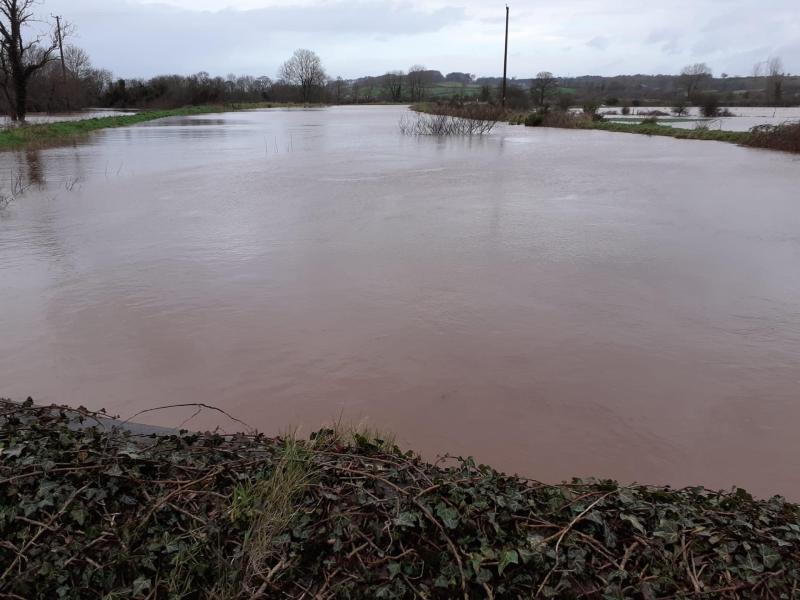 The Curran Road in Tobermore. Pic by Stephen McCracken.

There has been flooding, snowfall and power outages across County Derry today as Storm Franklin approaches the area.

The third storm to hit Ireland and the UK within a week, the effects were felt as early as Saturday evening, with the country still recovering from Storms Dudley and Eunice.

Overnight rain has left one road impassable and caused flooding at a local GAA pitch after the Moyola River level surged due to the storm.

A police spokesperson said they had attended the Curran Road, Tobermore following reports of flooding in the area.

“Police are requesting motorists seek alternative routes to avoid the area if possible, as the road is impassable at present,” they said.

”Other roads close to the river Moyola may also be effected.We are working with our partner agencies to have the road re-opened as soon as possible for motorists.

WATCH LIVE: Track the path of Storm Franklin as it crosses Ireland with dangerous conditions forecast

“If out and about this morning please take extra care on the roads with accumulations of overnight rainfall making driving conditions hazardous,” they added.

Elsewhere, river levels have been rising steadily on the Ballinderry River in south Derry.

Photographs shared on the club Facebook page showed water levels reaching the benches of the dugouts.

During the week, Storms Dudley and Eunice caused widespread disruption across the county, while a weather warning for high winds was in place last night.

Amber weather warning for strong winds associated with #StormFranklin - from midnight until 07:00 on Monday 21 February.

There could be risk of travel delays, power cuts, damage to property, large waves, and fallen trees. Info and advice: https://t.co/tP2B50Uwd4 pic.twitter.com/ap6wFztXZ7

Further flooding also resulted in a blocked road between Plumbridge and Draperstown, while Department for Infrastructure Permanent Secretary, Katrina Godfrey said her team had dealt with 150 separate incidents on Saturday night into Sunday morning.

"If you absolutely must be out tonight, do take care," she said.

Overnight our teams dealt with 150 separate incidents. This evening looks set to be even busier, with a yellow wind warning now in place & an amber warning due to take effect from midnight. If you absolutely must be out tonight, do take care. #hivisheroes #StormFranklin pic.twitter.com/32VtBHKPmP

Meanwhile, the Met Office has named an approaching weather front as Storm Franklin, with an amber weather warning in place from midnight today until 7.00am tomorrow morning.

Snow showers and power outages have also been reported across the North, and gusts of 87mph recorded at Mace Head, County Galway, as the storm continues to make its way towards County Derry.

Causeway Coast and Glens Borough councillor Dermot Nicholl has taken to Facebook to confirm faults with the electricity supply in Greysteel and Ballykelly.

In Portstewart, water has surged into the Crescent, partially submerging equipment in the play park as large waves continue to crash onto the sea walls.

Local shop Sheila's of Portstewart posted footage of the surge to their Twitter account this evening as Storm Franklin reached the north coast.

Mid Ulster District Council have closed all their parks and forest sites ahead of the storm 'until safety inspections can be carried out'.